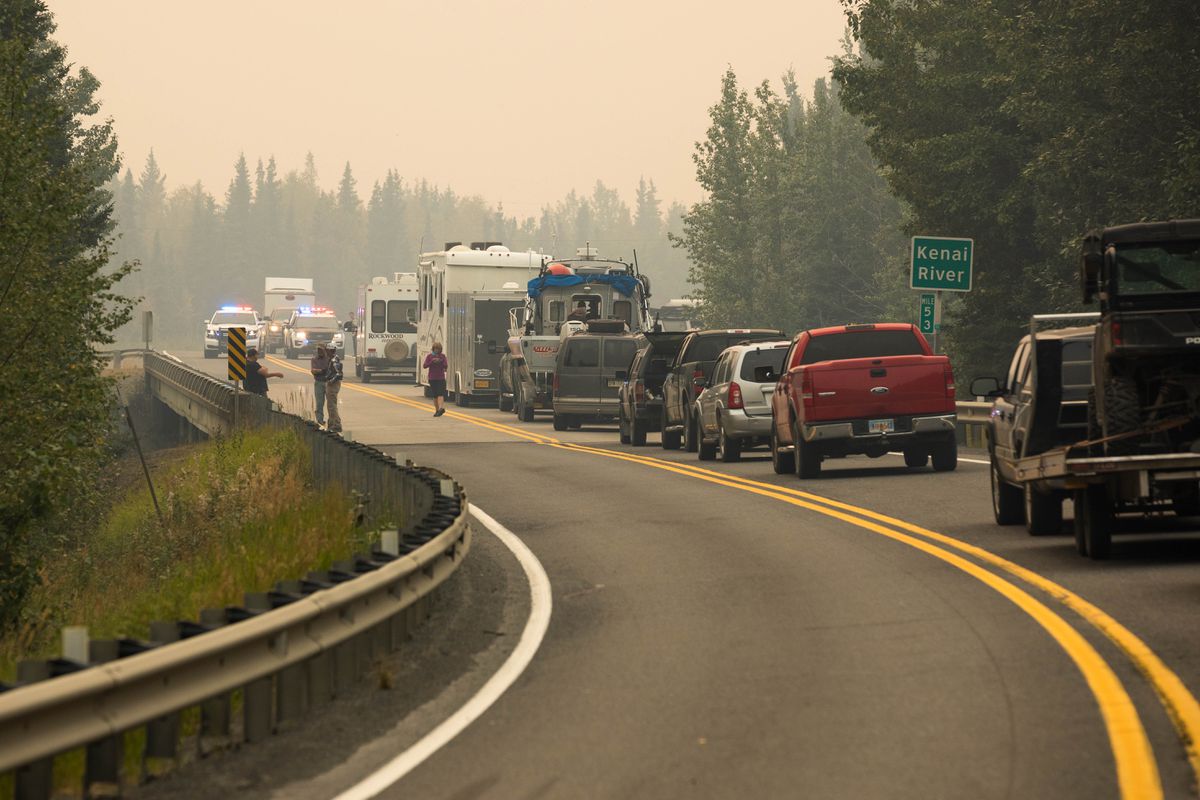 Traffic stopped at Mile 53 of the Sterling Highway on Sunday, Aug. 18, 2019 after the road was closed in both directions due to the Swan Lake fire. The use of pilot cars was largely lifted Tuesday after rain moderated fire behavior. (Loren Holmes / ADN)

Traffic stopped at Mile 53 of the Sterling Highway on Sunday, Aug. 18, 2019 after the road was closed in both directions due to the Swan Lake fire. The use of pilot cars was largely lifted Tuesday after rain moderated fire behavior. (Loren Holmes / ADN)

Cooler, wet weather has allowed managers to reduce evacuation orders for residents near the Swan Lake fire on the northern Kenai Peninsula.

As much as a half-inch of rain fell over the 162,000-acre fire Monday night, according to an update from the Kenai Peninsula Office of Emergency Management.

The fire had at times threatened the communities of Cooper Landing and Sterling. As of Tuesday morning, more moderate fire behavior led officials to downgrade Cooper Landing to a less-urgent “ready” evacuation status. Evacuation orders were lifted entirely for Sterling because the fire’s progress in that direction was halted, officials said.

Officials also stopped using pilot cars along miles of the Sterling Highway after conditions required them since mid-August, according to Jessica Borden, at the borough’s fire call center. Highway construction is resuming, and pilot cars and flaggers will be used in those areas.

Also on Wednesday, a portion of the Kenai River will reopen to boaters, said a statement from state and federal agencies. The river will be opened daily from 6 a.m. to 6 p.m. from the Cooper Landing state boat launch to Sportsman’s Landing. The river remains closed to boating from Sportsman’s Landing to Skilak Lake.

An emergency burn closure issued two weeks ago for state, private and municipal lands in the Kenai Peninsula and Matanuska-Susitna boroughs will be lifted at 8 a.m. Wednesday, announced the state Department of Natural Resources. Campfires and charcoal grills will again be allowed, but people should remain careful, State Forester Chris Maisch said in a statement.

“Even with the burn closure rescinded, people still need to be extremely careful with any kind of burning,” he said. “While the rain over the weekend was enough to dampen fine surface fuels, it was not substantial enough to penetrate down to the deeper layers of the duff that remain extremely dry.”

Occasional light afternoon showers are possible over the next several days and the next chance for significant precipitation will be this weekend, managers say, but vegetation that could fuel the fire remains dry despite the recent moisture.

Community meetings were scheduled for 6 p.m. Tuesday at the Cooper Landing School and the Sterling Community Center.