Newly discovered virus could be behind deformed bird beaks 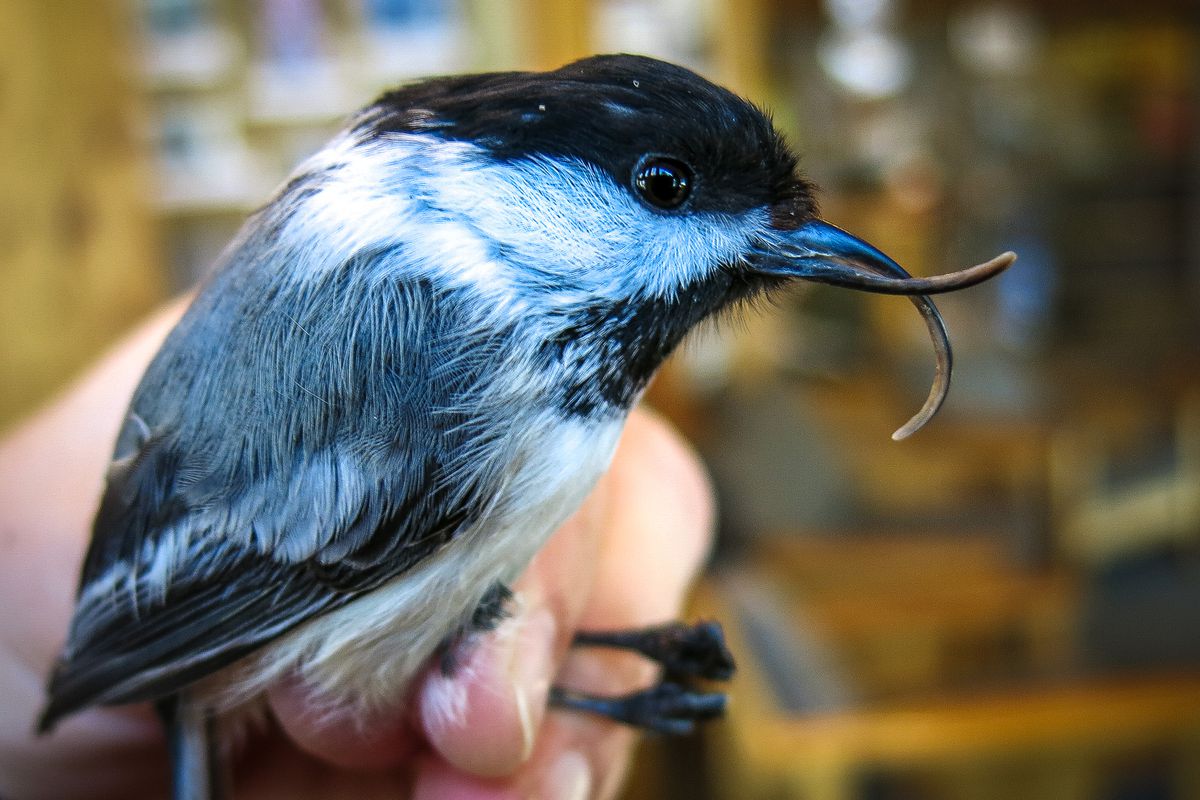 A beak deformity in a black-capped chickadee is an example of how the elongated and decurved upper mandible will often cross over the lower mandible. Southcentral Alaska has regularly seen beak deformities in black-capped chickadee since the 1990s. USGS wildlife biologists are currently looking into the cause. (Courtesy Rachel M. Richardson / USGS)

A beak deformity in a black-capped chickadee is an example of how the elongated and decurved upper mandible will often cross over the lower mandible. Southcentral Alaska has regularly seen beak deformities in black-capped chickadee since the 1990s. USGS wildlife biologists are currently looking into the cause. (Courtesy Rachel M. Richardson / USGS)

For years, birds have been showing up in the Anchorage area with beaks that are deformed, sometimes so severely misshapen that the birds cannot use them to pick up food and they starve.

Most of the birds affected with the mysterious disorder are black-capped chickadees, a species that stays year round in Southcentral Alaska and gathers in large urban flocks during the winter.

Now scientists have unlocked one important clue that might explain the birds' woes — a previously unknown virus that appears to be closely correlated with the elongated and often twisted beaks.

"This is the best lead we've gotten so far. We've gotten a very strong association between birds with the virus and those with the deformities," said Colleen Handel, a U.S. Geological Survey wildlife biologist who has been working for years to try to unlock the mystery of the beaks.

The virus was discovered through genetic analysis done by Handel, USGS colleague Caroline Van Hemert and researchers from the University of California at San Francisco and other institutions.

They examined the bodies of 28 dead chickadees and reported the results in a study published this summer in mBio, a journal of the American Society for Microbiology. Among the study group, all of the 19 birds with the deformed beaks had the virus, compared to two of the nine birds in the non-deformity control group.

Handel and her colleagues continue to sample live birds in the wild. They have been using traps and nets to temporarily hold birds and collect swabs from their mouths and posteriors, along with some blood samples. Results gathered since the published study was completed, using samples taken from more than 80 birds, confirm the strong association between the virus and the beak deformities.

There are other reasons to suspect the virus is the culprit. Though it is new to science, it is strikingly similar to some other viruses that cause diseases, including polio in humans and hoof-and-mouth disease in cattle, Handel said.

"I think we have a smoking gun," said Handel, who has investigated multiple other possible culprits.

However, it is still not a sure thing that the virus is the cause of the deformities. The link could be the other way around, Handel said, with the deformities making birds more susceptible to the virus.

That is why they are planning a new study to see, if possible, which came first: the virus or the deformity.

Hopes are to start the project this coming winter in California, she said. Captive birds would be kept in a variety of arrangements giving uninfected birds different types of exposure to infected, deformed-beak counterparts.

If it turns out that the virus is the cause of the deformities, there are actions that could then help birds in the wild, Handel said.

Since the virus is concentrated in birds' digestive tract, it may be that group feeding is spreading the disease, she said. Chickadees, though dispersed in the summer, gather in tight groups in winter to find and eat food, and they flock to neighborhood birdfeeders.

To keep those chickadees safe, local residents should wash their birdfeeders with a bleach solution, throw away any birdseed that might be contaminated with infected fecal matter and keep feeders down for a couple of weeks before putting them back into service, Handel said.

For the affected birds, beaks grow up to two times faster than normal, with cells of keratin arrayed in abnormal structures. The deformities, seen only in adults so far, make it difficult for birds to grasp food, crack open seeds and clean their feathers. As a result, they can starve or — because their dirty, matted feathers lose insulation qualities — freeze. Since chickadees put on as much as 10 percent of their body weight during winter days to survive the winter nights, lack of food and insulation can be fatal, Handel said.

Even if they are able to eat, birds with bad beaks need more time to do so, so they stay in exposed places for longer periods and are at more risk from predators.

"They'll come and they'll just sit out," Handel said. "They'll just be camped out at a feeder and will be eating as much as they can because it's so difficult for them."

The deformities have affected 6 to 7 percent of black-capped chickadees in the Anchorage region, Handel said. Normally, there would be only a few such cases in the wild.

Other species are also affected. Northwestern crow have an eye-popping deformity rate of 17 percent. Also showing up with deformed beaks have been nuthatches, magpies, woodpeckers and Steller's jays —  in all, 36 affected species in Alaska as of 2014.

Although reports have been concentrated in the Anchorage area, the problem goes well beyond Alaska.

In the United Kingdom, there have been over 900 reports of deformities across more than 35 species, according to the nonprofit British Trust for Ornithology. The organization has established a citizen monitoring program called the "Big Garden Beak Watch."

Clusters of deformities have also been found among crows in India and Southeast Asia and among vultures in Africa, Handel said.