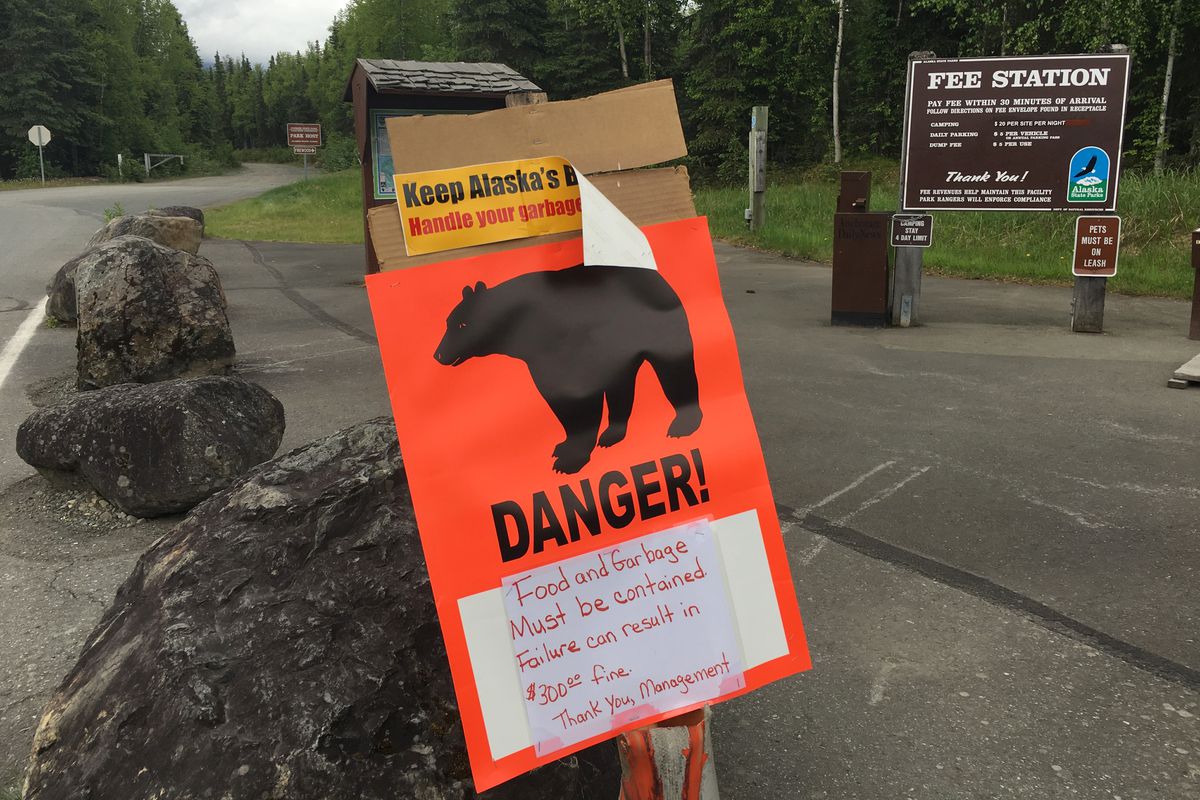 Multiple bear warning signs are posted around the Eagle River Campground Wednesday, June 14, 2017. Three hikers were injured by a bear on a trail near the campground. (Bob Hallinen / Alaska Dispatch News)

Multiple bear warning signs are posted around the Eagle River Campground Wednesday, June 14, 2017. Three hikers were injured by a bear on a trail near the campground. (Bob Hallinen / Alaska Dispatch News)

Ken Marsh, with the Alaska Department of Fish and Game, said biologists spoke with members of the four-hiker group that encountered the bear with two cubs at midday Wednesday.

Anchorage police said Wednesday that the group of hikers included three young adults and one minor. Officials initially reported that the hikers were all minors. Police said no further information about the victims would be released.

Responding Anchorage police officers fired on and wounded the sow. Biologists spoke with an area homeowner who saw the bear in her back yard that afternoon but weren't able to find the animal during a three-hour track.

"It appeared to be headed upriver and getting out of Dodge," Marsh said. "Hopefully it'll be headed up into the park and not have any more involvement with people."

Marsh said the incident sounded like a defensive reaction — in which the bear tried to knock the hikers down, then run away — rather than a predatory attack.

Three juveniles were injured Wednesday in a brown bear attack near the Eagle River Campground, authorities said, prompting a response by officers who fired on the sow apparently responsible.

Biologists from the Alaska Department of Fish and Game and a state park ranger followed the bear's tracks for about three hours before calling off the search for the animal, which is believed to have suffered a minor injury from the gunshots, officials said.

The victims and a fourth juvenile had been hiking in woods near the campground, police spokeswoman Renee Oistad said, when they were injured by the bear, which was with two cubs.

The group broke up as some of them sought help. More than a dozen officers responded to initial reports at 12:10 p.m., and the victims were taken to a hospital with non-life-threatening injuries.

Kurt Hensel, the chief ranger for Chugach State Park, said the group that encountered the bears included two girls and two boys, according to reports from police. The three hikers who were injured suffered "minor cuts and scratches," each to different parts of their bodies: forearm, legs, and back and chest, Hensel said.

The group was hiking just north of the campground, which they came to through trails starting at a nearby subdivision, Hensel said.

"It sounds like they surprised (the bears), and mama bear reacted defensively," Hensel said. Based on the reports, the sow's reaction was not out of the ordinary, he said.

It wouldn't be the mother bear's last interaction with humans.

"While officers were searching for the hikers, they were charged by the brown bear," Oistad wrote. "Officers fired shots at the bear and the bear ran off into the woods."

Oistad said officers saw two cubs when they fired on the bear.

Fish and Game spokesman Ken Marsh said department biologists responded to determine whether the sow had been struck when officers opened fire on it. The biologists found a trace of blood at the scene of the shooting, but that's it, Marsh said.

"They followed its trail for three hours and found no more blood," Marsh said. "It was probably not a mortal wound, just something in the extremities."

The biologists and a park ranger also did not spot the bears as they followed tracks along what he referred to as "The Tank Trail," which parallels Eagle River, and into the woods, Marsh said.

Tom Harrison, superintendent of Chugach State Park, which operates the campground, said two rangers had been sent to the scene. He didn't have immediate word on how many people were staying at the campground Wednesday.

Chief ranger Hensel said signs warning visitors about the attack were put up, and the trail has been closed upriver from the campground. The trail will likely remain closed for at least a week, he said.

Rangers also plan to patrol the area Thursday, Hensel said. There are no further plans to pursue the bear.

The attack comes after two bears — one black and one brown — were shot and killed overnight Monday by Eagle River residents after they approached a horse corral and raided a chicken coop. Both shootings were initially considered by Fish and Game to be in defense of life or property.