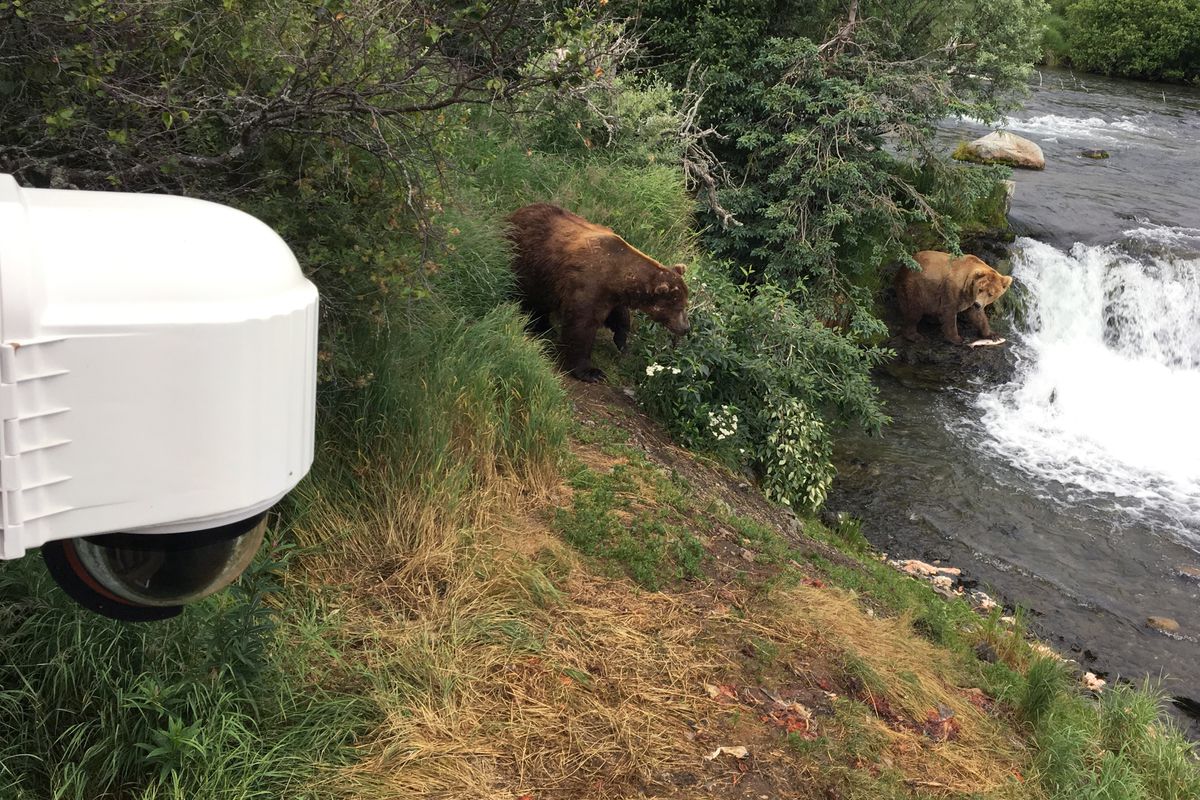 Looking for a moment of Zen? Or just wanting to sneak away to a wild place, even if it's only for a minute? Enter the Katmai bear cams.

The cameras, a set of nine, monitor brown bears feasting at five different locations in Southwest Alaska's Katmai National Park and Preserve, a park known for its active volcanoes and wildlife, especially bears.

Explore has been running the Katmai cameras since 2012. The nonprofit has cameras all over the world documenting different animals — from bobcats, tigers and sea lions in remote areas to puppy cams at local animal shelters.

Jonathan Silvio, technology manager at Explore.org, said the Katmai bears are some of the site's most popular featured animals, with millions of people viewing the feed every year. This year, the bear cams went live at the end of June and will run through mid-September.

Cathy Bell, chief of interpretation and education at Katmai, said interest in the park — which is difficult and expensive to get to — has skyrocketed since the cameras were installed. About 40,000 people come to the park every year, making it one of the nation's least visited. By watching the bear cams, people still get to learn about the bears and the wild nature of the area.

The Katmai site is far from Alaska's road system and doesn't have much telecommunication infrastructure. Here's what it takes to keep the cameras going every year.

The cameras run (mostly) by themselves

The cameras are about the size of volleyballs, Silvio said. They run on fuel cells powered with solar generators and are kept in self-cleaning vessels. The purpose of the self-sustaining units is to keep the lightest footprint possible in the park. Self-sustaining is also important because it would be difficult for technicians to get to Katmai if anything broke.

There are a total of nine cameras, but only five or six ever operate at once due to limited bandwidth.

Volunteers run the cameras remotely — and so could you

There's no ranger behind the camera you're watching. Instead, it's a group of 40 volunteers who have been trained to operate the cameras remotely, panning and zooming depending on the bear activity. Anyone can sign on to operate a camera through Explore.org. This year, the group is working with at-risk youth through a nonprofit in Los Angeles.

Explore donates $150,000 to the park each year to employ an interpretative ranger who helps engage with the public through live chats and Facebook.

It's one of the toughest locations for Explore.org

While some of Explore's sites — like Round Island, where they have a walrus cam — are even more remote, Silvio said the Katmai live feed is the most challenging to run.

"It's about as complicated as it gets," he said.

Making sure all the batteries stay charged and the internet connections work are two of the biggest challenges, Silvio said.

There is bear drama

Bell said part of what makes the Katmai bear cams and park so special is that it's a place where you can get to know the wild bears on an individual level.

Watching the bear families come back at the beginning of the season is one of the highlights of the year. Bell wasn't sure if one particular sow with three cubs would return this year — cubs have a 50 percent survival rate during their first year — but now the yearlings are in Katmai to feast on salmon.

Some of the bears have gained a following online due to their markings or personality. Explore.org holds a "fat bear contest" in the fall, where people can vote for which bear has gained the most weight over the course of the summer. Otis, a perennial winner of the contest, is a fan favorite.

Bell said occasionally there are bear fights — and even deaths — on camera. She said people often worry about the bears and call rangers, hoping they'll intervene. But that's nature, she said, and park rangers are under strict instructions to not interfere unless the interaction is human caused — like a vehicle hitting an animal.

Where are the bears this year?

Bell said this year there seem to be fewer bears frequenting the popular Brooks Falls, with more bears hanging around the lower river. The reason for that isn't clear. Bell said water levels are lower this year, possibly making it easier to catch fish. Or other bears could be less interested in fighting for space with the large males that hang out near Brooks Falls.

For just the first two weeks in June, almost 5 million people viewed the bear cams on Explore.org, watching more than 1 million hours of bears. That doesn't include over 2 million views for Facebook videos with 4.3 million followers.

In 2016, 32.8 million people viewed the live cam, with more than 9.2 million hours of bear viewing. That works out to about 32 minutes per person.