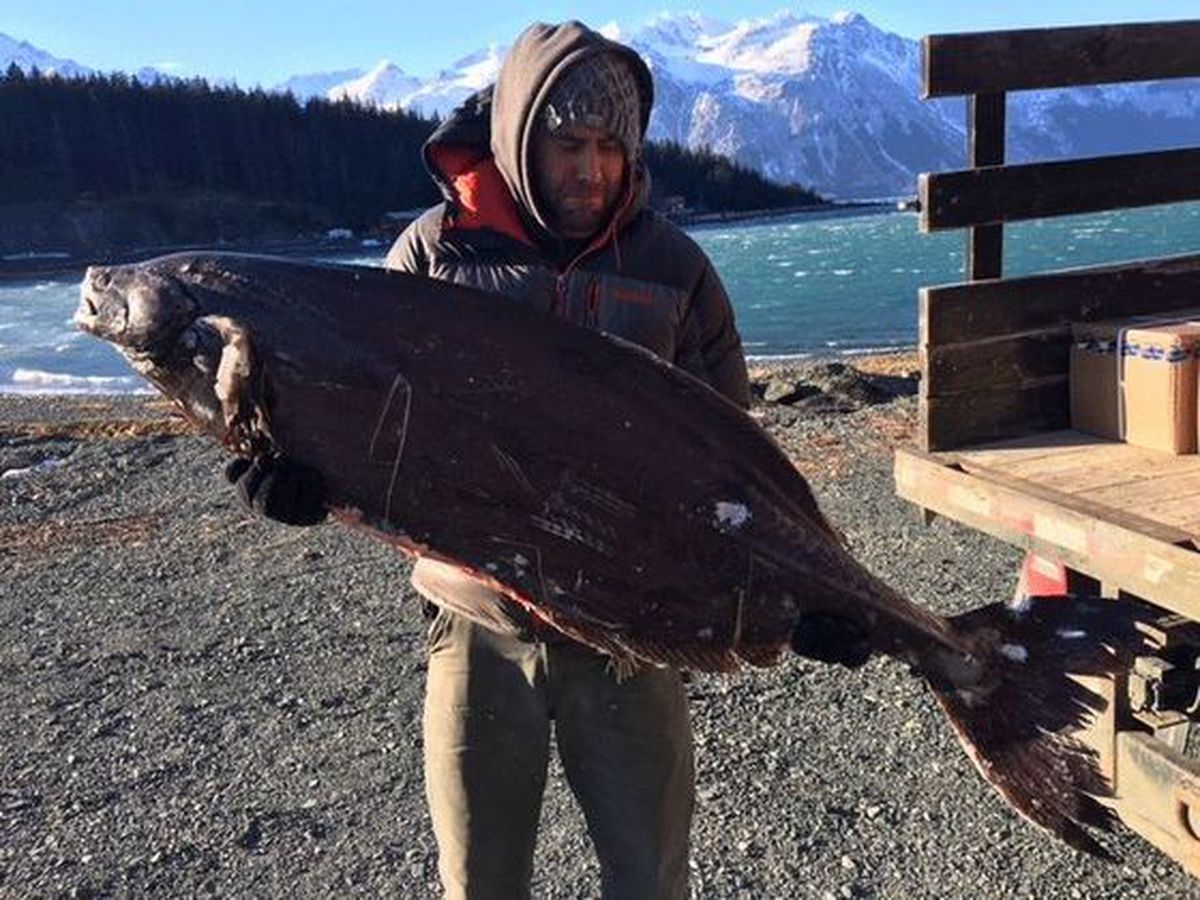 Harry Rietze hauls a 70-pound ragfish to a freezer in the Haines Packing Co. for storage. (Brad Badger)

Harry Rietze hauls a 70-pound ragfish to a freezer in the Haines Packing Co. for storage. (Brad Badger)

HAINES — As the tide ebbed down the beach outside his house Friday, Harry Rietze discovered a mysterious sea creature that one scientific paper described as "a puzzling fish with soft bones."

The brown, frozen animal Rietze found is a ragfish, and little is known about them. A few have washed up on beaches in Gustavus and Juneau, according to recent news reports, but they're a rare find. Commercial trawlers, seiners and gillnetters sometimes catch them off the southern coasts of California, north to the Bering Sea and in waters off Japan.

Because they live at great depth, few ragfish are found on beaches, according to a 2003 scientific paper written by George Allen, professor emeritus in the fisheries department at Humboldt State University. Southeast Alaska is the exception.

"A surprisingly large number of adults have been hand-collected from the beaches of bays and inlets of southeastern Alaska," Allen wrote in the paper published by the Marine Fisheries Review. "Other recoveries from beaches in southeastern Alaska were made by school children on field trips and by young boys on fishing trips near Kake and Petersburg."

Allen drew on scientific literature, studies and accounts from fishermen dating to 1880 as sources for his paper. Ragfish have come to scientists primarily through fishermen and citizens who deliver them to fisheries management personnel, museum curators and ichthyologists. In 1998 and 1999, state and federal fisheries biologists in Juneau and Petersburg provided researchers with 16 ragfish records.

Other specimens have been found in the stomachs of sperm whales and Steller sea lions.

Even the ragfish's diet is mysterious. In one study, when the contents of 34 ragfish stomachs were examined, 65 percent of them were empty.

"Specific comments on material seen in six stomachs were: 'yellowish material at the lower end of the intestine,' or 'runny orange liquid,'" Allen wrote.

A unique feature of the ragfish is the name itself. While fishermen bestow a plethora of names upon uncommon fish, the name "ragfish" was widely used with one exception. Whalers in the 1930s utilized a different moniker when describing the fish to curious scientists.

"Dr. Robbins is confident that the 'bastard halibut' of the whalers is identical (to) the brown ragfish," Allen wrote.

Rietze first thought the beached fish was a halibut. He also found eggs about 50 feet to the right of the frozen ragfish carcass. The comet-shaped eggs, orange balls with translucent, tapered tails, were clustered throughout a bed of seaweed.

"This thing spawned on the beach," Rietze said. "I found some little orange eggs. I grabbed one and it smelled like a salmon egg and it had a little membrane around it, like a little tail, which is nothing like a salmon egg."

Not much is known of their spawning habits, although a study was done in 1990 about the early life history of fish in Southeast Alaska. Researchers found a large portion of ragfish eggs near sub-marine canyons, and they were most abundant in the entrance to Chatham Strait and the north edge of Dixon Entrance. Scientists estimated spawning to occur in late winter and early spring.

Swarms of seagulls spent the last few days eating the eggs, perhaps to the dismay of a lonely male ragfish still swimming around Letnikof Cove.

Juvenile ragfish change significantly as they grow into adults, according to Allen. But even the descriptions of young and adult ragfish differ and converge. Both juvenile and adult ragfish heads have been described as "trout-like" and "calf-like."

"Head profiles may thus vary with the eye of the illustrator and the audience," Allen wrote. "Another researcher summarized, 'All that is known about the remarkable metamorphosis of this species from juvenile to adult is the change itself.'"

The aesthetic appeal of the fish is also subjective. While many consider the fish ugly, one fisherman refused to turn his find over to researchers.

"The fisherman was not willing to donate the specimen to science as it was aesthetically pleasing to him," Allen wrote of one researcher's account. "Indeed, beauty is in the eye of the beholder."

Rietze said his specimen "was definitely weird-looking." He's keeping it in his freezer at Haines Packing and it weighs 70 pounds.

Rietze plans to see if the American Bald Eagle Foundation wants to exhibit his ragfish.

This story was republished with permission from the Chilkat Valley News.