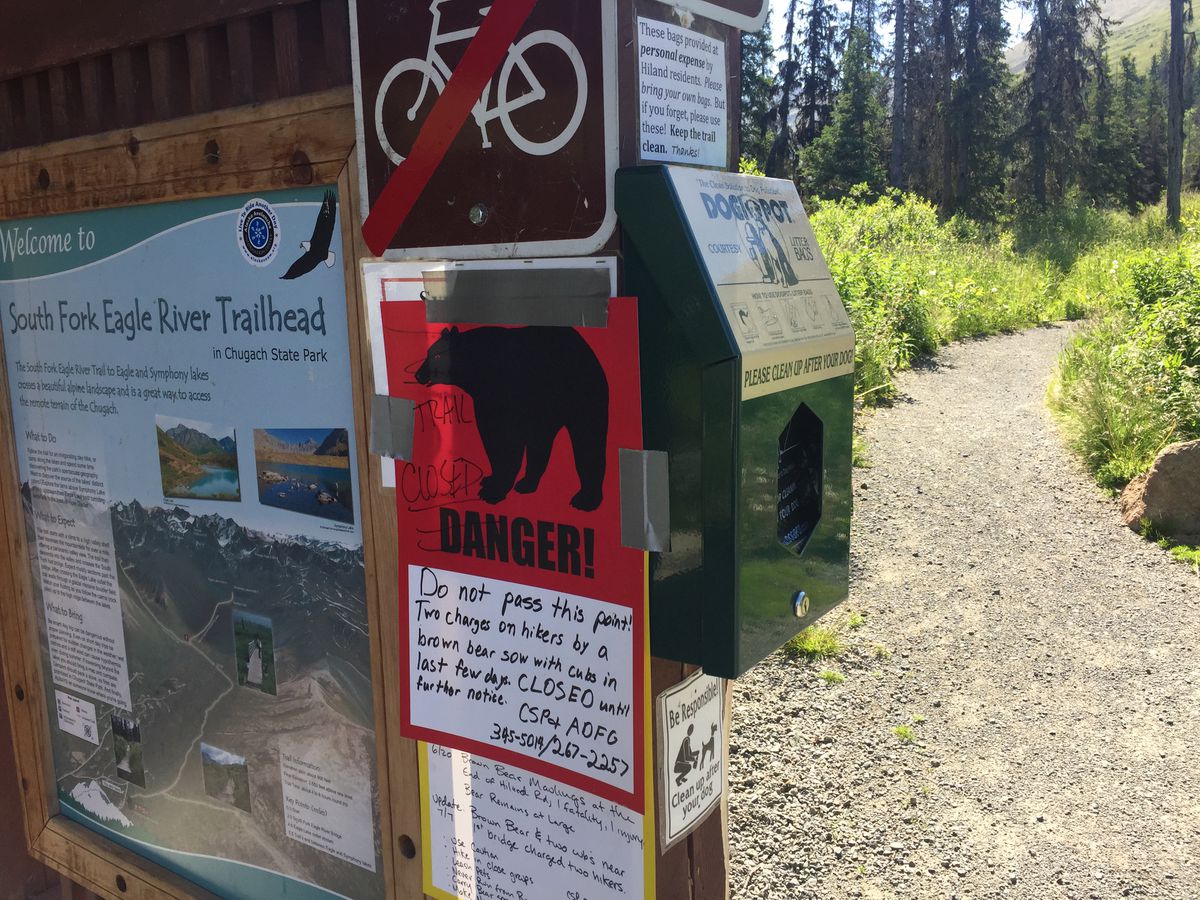 A sign warns hikers of a trail closure due to bear activity at the South Fork Eagle River trailhead on Thursday. (Matt Tunseth / Alaska Star)

A sign warns hikers of a trail closure due to bear activity at the South Fork Eagle River trailhead on Thursday. (Matt Tunseth / Alaska Star)

DNA tests have revealed that the brown bear sow and two cubs killed in the South Fork Eagle River Valley last week were not involved in the two maulings in the area last month that left one man dead and another injured, the Alaska Department of Fish and Game said Thursday.

Hair and tissue samples taken from the bears killed were compared to hair, blood and saliva collected at the mauling sites. They did not match.

A Fish and Game spokesman could not be reached for further comment Thursday, including about whether the agency will keep traps in the area or continue searching for the bear.

Test results confirmed that the same brown bear sow both killed Soltis and injured Vasquez, according to Fish and Game.

The bear attacked Vasquez on the morning of June 20 near the end of Hiland Road — a winding, 9-mile-long route into the South Fork Eagle River Valley. Vasquez was part of a search group looking for Soltis, a civil engineer and avid outdoorsman who went missing two days earlier. Soltis lived near the end of Hiland Road. It was believed he set out for a quick hike before dinner June 18, a Monday, and never returned.

Police found Soltis' body in a brushy area a short distance from the road, near where the bear mauled Vasquez. Police said a brown bear had killed Soltis, and it appeared the bear was protecting his body.

Fish and Game had bear traps in the area until the end of June, removing them after an unsuccessful trapping effort. The agency then reset the traps last week after receiving reports of two close-range brown bear encounters in the area, one involving a cub and the other a sow with cubs. Neither resulted in injuries.

Days later, concerned neighbors reported the brown bear sow and two cubs in the area of Harp Mountain. From the mountainside, the June mauling sites were visible, Fish and Game spokesman Ken Marsh said last week. The bears were killed.

On Thursday afternoon, hot pink tape was strung across the entrance to the South Fork trailhead, near the end of Hiland Road. A bright red sign warned hikers to stay away. The area was empty except for one vacant car.

The Pettits, a family of four visiting from Illinois, later drove up to the trailhead. Grant and Kristen Pettit and their two children had wanted to hike to Eagle and Symphony lakes, but altered their plans after reading about the trail closure. They decided to drive by the area on their way to a different trail. It was the last day of their trip.

"It looked like a really cool hike," Grant Pettit said. "Now we have a reason to come back."

Kevin Brownsberger, who lives nearby, was bringing in his garbage can that afternoon. He said he and his neighbors remained on high alert since the fatal mauling. They track area bears on social media. He bought new cans of bear spray.

"We're all just nervous," he said.

Soltis' death is the second fatal bear attack in the Municipality of Anchorage in two summers.

Last June, a 16-year-old runner was killed by a black bear during a race at Bird Ridge. State biologists later shot and killed four black bears in the area, including one they believed fatally mauled the teenager.