Bring in the bird feeders and secure trash: Bears are stirring in the Anchorage area and beyond, Fish and Game says 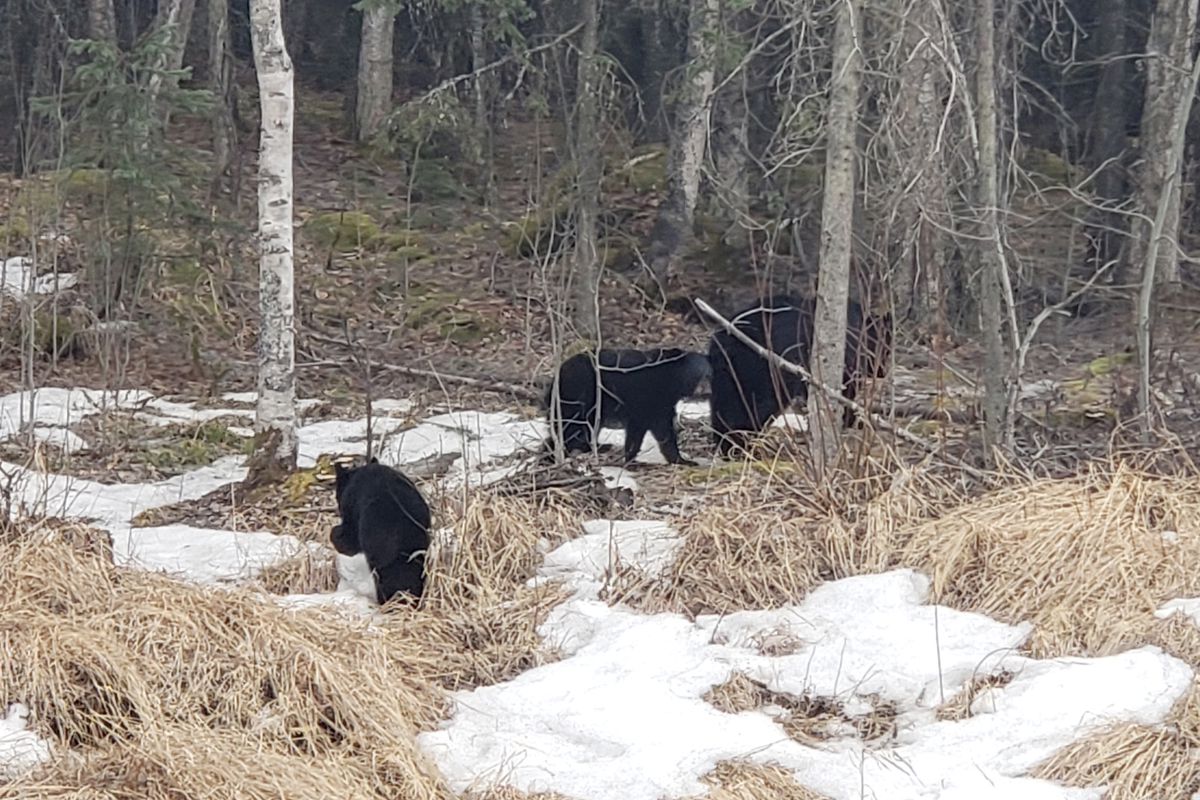 It’s that time of the year again: Bears are stirring in the Anchorage area and beyond, prompting the Alaska Department of Fish and Game to remind everyone to bring in their bird feeders, secure their trash and remain alert out on the trails.

“It’s a sure sign of spring,” said Ken Marsh, a Fish and Game spokesman in Anchorage.

Fish and Game offices have recently received reports of bear sightings from Southcentral Alaska to Kodiak to Southeast, Marsh said on Thursday.

Within the past week around Anchorage, Alaskans have reported several sightings of black bears, including one bear getting into a dumpster off North Post Road, near Ship Creek, and one in Far North Bicentennial Park , Marsh said. Eagle River resident Shane Daniels said he saw a black bear sow and two cubs on Thursday near Arctic Valley Road.

“If black bears are starting to stir, certainly we can expect brown bears to be starting too,” Marsh said.

Spring arrived early in Anchorage this year, with the fourth-earliest snow melt on record, according to the National Weather Service. Melting snow can lead to flooded dens, rousing bears.

“It seems like springs have been coming earlier over the last few years and it seems like we are getting more bear reports a little bit earlier than we have in previous years,” Marsh said.

Right now, bears’ natural food sources are still scarce in many parts of the state. That can make human-provided food sources particularly attractive, such as garbage, bird seed and chickens, according to Marsh.

Fish and Game is asking people to help keep bears out of human-provided food sources now, so the animals don’t develop bad habits going into the summer.

Reminders from the department include:

• Store garbage in bear-proof containers or inside buildings and keep it secured until the day of pickup.

• Electric fences can keep bears away from gardens, compost, chicken coops and other livestock. Make sure your fences are operational and turned on.

• Take bird feeders down from April through October and clean up spilled bird seed.

• Clean barbecue grills after each use.

Also, Marsh said, people should practice general bear safety in the outdoors such as making noise, traveling in a group and bringing a deterrent, whether that’s bear spray or a firearm, depending on where you are and what you’re comfortable with.

“You just have to have your bear safety hat on,” Marsh said.

Fish and Game is also asking Alaskans to report incidents of bears frequenting populated areas, such as neighborhoods, getting into trash or showing aggression. Make a report by calling the local Fish and Game office or online at adfg.alaska.gov.