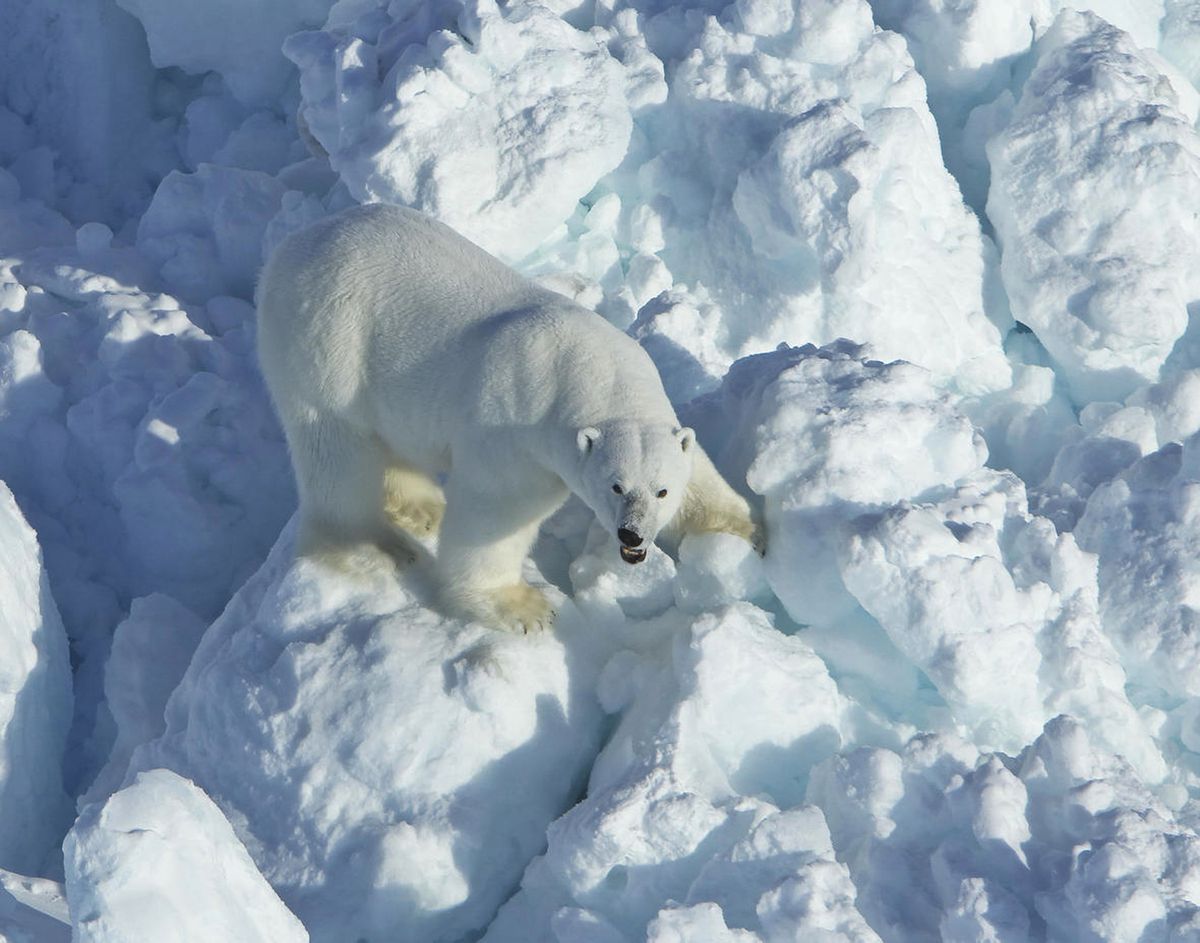 In this April 8, 2011, photo provided by the U.S. Geological Survey, a polar bear walks across rubble ice in the Alaska portion of the southern Beaufort Sea. (Mike Lockhart/USGS via AP, File)

In this April 8, 2011, photo provided by the U.S. Geological Survey, a polar bear walks across rubble ice in the Alaska portion of the southern Beaufort Sea. (Mike Lockhart/USGS via AP, File)

Correction: An earlier version of this story incorrectly referred to infrared technology as radar in multiple places. A reference to Alyeska has also been removed. This version has been corrected.

A method used by fuel companies to avoid polar bear dens before they search for oil or gas works less than half the time, according to a study released Thursday. That failure could pose a grave risk to mothers and their cubs in the dens, which are hidden under ice, if the Trump administration finalizes its plan to expand drilling into the Arctic National Wildlife Refuge.

According to the study published in the journal PLOS One, infrared technology mounted on airplanes missed 55% of dens that were known to exist west of the Alaskan refuge off Prudhoe Bay. Oil operators search for the dens to comply with a federal requirement to build roads and facilities at least a mile away from the hibernating bears, whose shrinking populations are designated as threatened under the Endangered Species Act.

Since the 1990s, mining operations have used surveillance technology known as FLIR - Forward Looking Infrared - to identify the heat signature of maternal bears that bore as deep as four meters under thick ice to give birth. But FLIR is often disrupted by bad weather that blinds it to dens in some surveys and causes it to falsely identify dens in others.

Researchers who used the surveys provided by the industry as a guide to find dens and study bears between 2004 and 2016 found at least 18 dens that the technology missed. Conversely, they said, bears didn't occupy areas that surveys said they inhabited.

"We froze our bleeps off out there," said Tom Smith, a study co-author and associate professor at Brigham Young University. "I mean, it's rough. When someone is telling us there's a den here and we invest a lot of time and a lot of effort and there's nothing there, and then we're going down the sea ice 10 miles away and there's a den when they said there wasn't any, we took it kind of personal. We said this is useless. This is not working."

Smith and researchers at Polar Bears International, a nonprofit conservation group, embarked on their study of aerial surveys using FLIR. They determined the technology can easily be disrupted if surveys are conducted in windy conditions or bad winter weather on the tundra.

Patrick Bergt, a manager of regulatory and legal affairs for the Alaska Oil and Gas Association, said FLIR "is just one of many mitigation activities" used by the industry to minimize harm to polar bears. Bergt said 40 years of data collection has shown "at most, a negligible impact on polar bear populations" on the North Slope Borough, an area of Prudhoe Bay where the study was conducted.

Much of what scientists understand about polar bears “is due in large part to the funding, personnel, and cooperation of oil and gas operators” that have a long history of cooperation with the U.S. Fish and Wildlife Service officials in the area, Bergt said.

The study comes five months after the Trump administration announced a controversial proposal to allow petroleum operations in the entire coastal plain of the Arctic National Wildlife Refuge, the most aggressive of five listed options. The proposal is in the process of being finalized, possibly by year's end. It would be the first time exploration and drilling would be allowed in the environmentally pristine refuge, a critical habitat for polar bears.

Under the Interior Department's Coastal Plain Oil and Gas Leasing Program, 1.5 million acres would be offered to the industry, which is eyeing a potentially rich reward - an estimated 7.5 billion barrels of recoverable oil and more than 7 trillion cubic feet of natural gas.

But the potential loss of wildlife is also huge. The Arctic refuge hosts wolves, migratory birds and the massive Porcupine caribou herd that is sacred to the Vuntut Gwitchin First Nation, an indigenous group that has fought exploration and drilling.

According to the Bureau of Land Management, a division of Interior, oil and gas exploration and development could impact just about everything: Native hunting, water quality, greenhouse gas emissions, other types of air pollution and the breakup of permafrost. It could also result in oil spills and unintended boat strikes on marine mammals.

Bears stand to be impacted by airstrips and well pads, miles of oil pipelines, storage sites, a sewage treatment plant and 200 miles of roads.

Failing to correctly identify dens could have serious consequences. Polar bear mothers could be chased from dens by development activity such as seismic testing and road building before cubs are strong enough to survive the rigors of life on Arctic terrain. The animals could also be crushed or buried alive.

"The likelihood that maternal dens could be disturbed can be expected to increase" if and when oil and gas exploration is expanded to the refuge, the study said. "Because polar bear cubs cannot leave the shelter of the den until approximately 3 months of age, disruption . . . can have negative consequences."

Even under the best conditions, locating a polar bear den is difficult. Infrared technology often cannot detect their heat signature under a meter of thick ice, and mothers sometimes dig as deep as four meters.

Off Prudhoe Bay, where the winter wind blows hard and temperatures can plummet to 50 degrees below zero, it was possible for researchers to walk on thick ice without knowing a den was beneath them, Smith said.

Pregnant mothers dig into snow drifts in November and December, Smith said. Their babies are born weighing about a kilogram (2.2 pounds) around New Year's Day. Before they emerge in spring, mothers nurse them, drawing on stores of fat.

"They have to socialize and create a bond with their cubs so that they'll stay close for a couple of years or they could wander off and get picked off by a predator," he said. "They develop muscle skills . . . so they can learn to walk and jump on ice."

But if the mothers are disturbed, or the den destroyed, and they leave prematurely, all that is potentially lost. "That's not going to end well for those little cubs," Smith said.

According to the study, co-authored by Steven Amstrup and Geoffrey York of Polar Bears International, FLIR has flaws that the Arctic's harsh conditions expose nearly every time it is used. Howling wind throws it off. It cannot detect heat signatures under a meter of ice.

"They miss them because they're flying in bad weather," Smith said. "They're not paying heed to all the research that's gone before that says you can't just go out and fly."

At Prudhoe Bay, the weather is unforgiving in the spring and especially bad in winter when the surveys are conducted. The findings are shared with the U.S. Fish and Wildlife Service, another division of Interior, that manages the area. Researchers rely on the word of the agency's biologists.

"We were told by the Fish and Wildlife Service that a bear was gone," Smith said. So he had one of his students dig with a shovel to determine the thickness of the den. "All of a sudden, right at his feet, a bear sticks its head out." The student ran for his life. The bear stayed for another week.

“Yeah, it’s alarming” that surveys miss so many dens, Smith said. “It really undermines your confidence that they truly know where the bears are.”