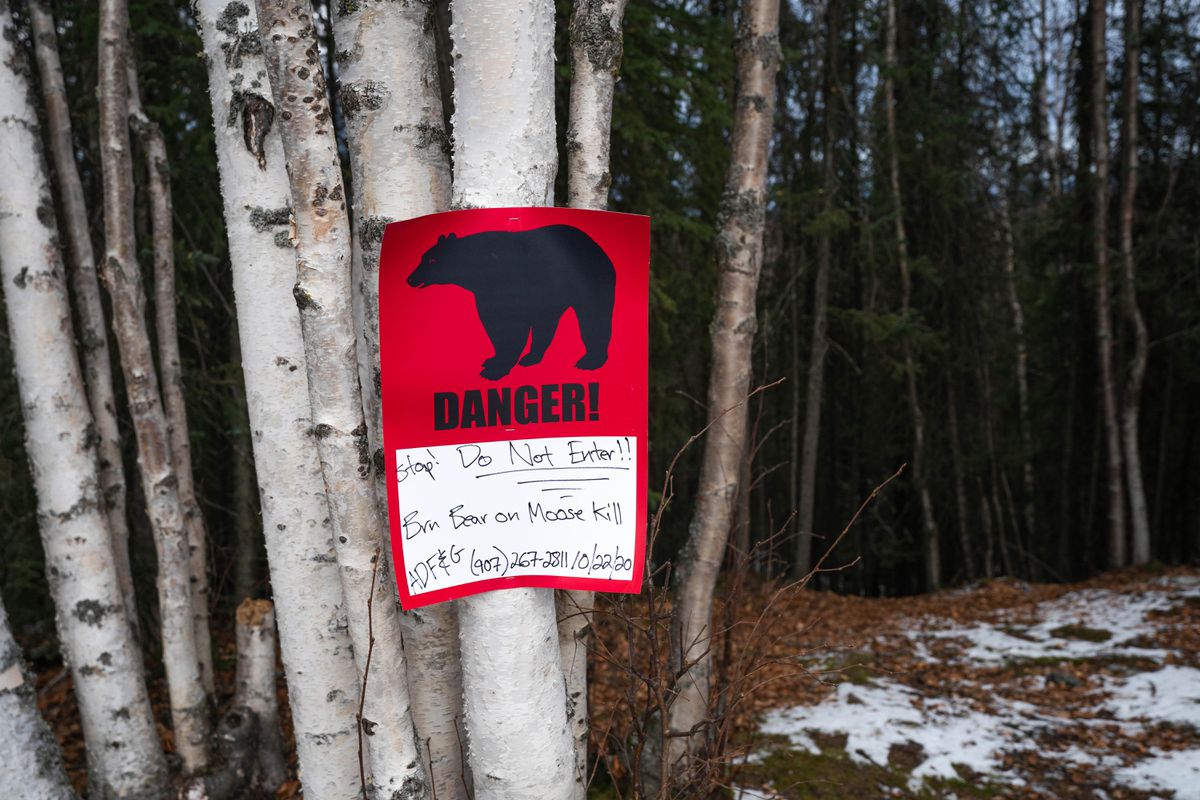 A sign warning people of a brown bear guarding a moose kill is posted off the Homestead Trail near the Abbott Loop Community Park, on Saturday, Oct. 24, 2020. (Loren Holmes / ADN)

A sign warning people of a brown bear guarding a moose kill is posted off the Homestead Trail near the Abbott Loop Community Park, on Saturday, Oct. 24, 2020. (Loren Holmes / ADN)

A local brown bear will get a private dining experience for the next couple of weeks as it tears through what wildlife officials believe is a dead moose near an Anchorage Hillside neighborhood park.

A forested area near the Abbott Loop Community Park is closed through Nov. 5 because of an aggressive brown bear, said Dave Battle, Anchorage area biologist at the Alaska Department of Fish and Game, on Friday.

A man was walking his dog recently when he came upon a group of magpies and ravens squawking away in the trees above. Thinking something dead might be nearby, he went over to investigate.

And then, a brown bear charged him — three times, Battle said. The bear never made contact with the man but got fairly close.

No one has actually seen the dead moose, but the birds nearby and the bear’s behavior make it seem like there’s like a carcass there, Battle said. They can’t really know it’s a moose, but that would be typical.

“If it’s something big enough for a bear to actually sit on and defend, it’s usually a moose,” Battle said.

The incident is pretty common, Battle said. If it happened on a main trail, Fish and Game may have gone in to try to spook the bear away while the park took care of the carcass. But since the suspected dead moose is likely far off the trail, Battle said the bear wouldn’t charge people some 300 yards away.

They think the purported carcass is somewhere south of the Lore Road Trail and west of the Birch Meadow Trail, below the Abbott Loop Community Park sledding hill.

“It’s out in the middle of the woods. It’s not on a main trail or anything,” Battle said.

Good morning, Anchorage! This map image outlines the boundaries of the Alaska Department of Fish and Game - Official...

Posted by Anchorage Parks and Recreation on Friday, October 23, 2020

While black bears usually hibernate by October, brown bears are still out before they head into the den around November, he said.

“If the bear is out of the den still, it’s trying to pack in every calorie it can so it can survive the winter," Battle said. "So, if it’s found a carcass it’s probably going to consume most or all of it before it goes into the den.”

For safety, they’re closing the area for a few weeks to allow the bear time to consume the carcass.

Anchorage Parks and Recreation is asking that park visitors carry bear spray and keep their dogs on a leash.