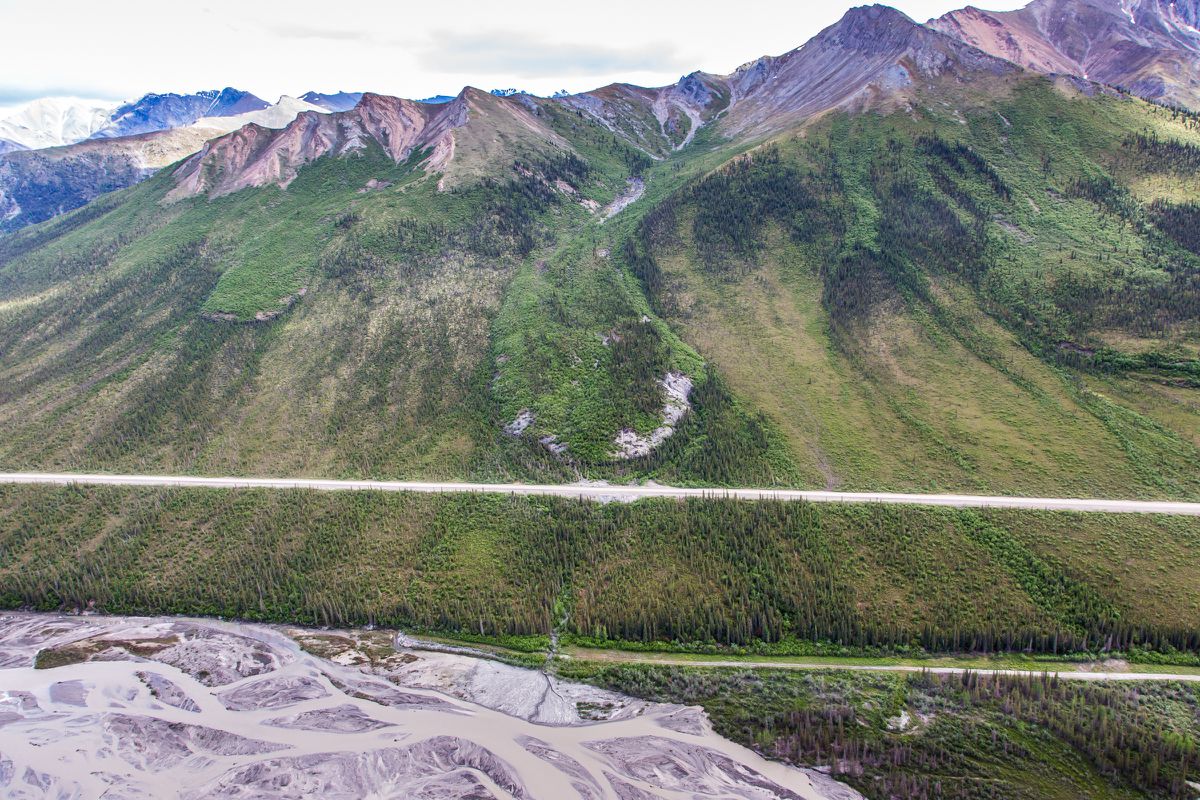 Three of several frozen debris lobes are moving at various speeds down the hillsides along the Dietrich River Valley in the southern Brooks Range, posing a threat to the Dalton Highway and trans-Alaska pipeline, in this 2014 photo. (Todd Paris / University of Alaska Fairbanks)

Three of several frozen debris lobes are moving at various speeds down the hillsides along the Dietrich River Valley in the southern Brooks Range, posing a threat to the Dalton Highway and trans-Alaska pipeline, in this 2014 photo. (Todd Paris / University of Alaska Fairbanks)

In a race against time, state transportation officials plan to move a nearly mile-long section of the Dalton Highway so it doesn't get T-boned by a giant mass of frozen debris believed to have been oozing downhill like a glacier for hundreds of years.

The goal is avoiding a "catastrophic failure" of the highway if the nearly mile-long mass — a frozen debris lobe of mostly soil, along with ice, trees and other detritus — plows away the road, said Jeff Currey, a materials engineer with the Alaska Department of Transportation and Public Facilities.

The so-called Haul Road is a critical conduit for Alaska's economy as trucks deliver the supplies to support North Slope oil production, which in turn pays for most state services.

The lobe, essentially a slow-motion permafrost landslide, is up to 90 feet thick and 850 feet wide. It's expected to hit the road, where it climbs toward Atigun Pass in the Brooks Range, in the next four to six years, based on its 15-foot annual creep.

Uncertain of the damage to come, the safest bet is realigning 4,000 feet of the two-lane highway within the next two years, officials said.

The new road will be built 400 feet west, buying the state about another quarter century at the lobe's current pace. The road will moved closer to the trans-Alaska pipeline, but a safe distance away, officials say.

Meanwhile, a section of the old highway will remain intact as a barrier that might slow or stop the lobe from advancing on the new section, Currey said.

"We can see it, it's coming, and frankly no one knows what will happen," Currey said.

Some think the lobe will destroy the road, as researchers suggest in lighthearted music videos, including a rap to Vanilla Ice's "Ice, Ice, Baby." Others think it will "bury it like The Blob," said Currey.

Dealing with the lobe, Frozen Debris Lobe A, could provide important clues on how to handle others — more than 20 other gigantic slugs of permafrost are moving downhill in the Brooks Range within a mile of the highway.

FDL-D, a few miles south of the immediate threat, is next in line to rumble over the road. That collision could occur in two decades, based on its current rate of speed.

Others shouldn't be a problem for more than 100 years at their current rates, said Margaret Darrow, an associate professor of geological engineering at University of Alaska Fairbanks.

The lobes were created eons ago, after retreating glaciers left cirques, bowllike areas, that collected dirt, trees and other matter. Water and snowmelt mixed in and froze, helping make permafrost.

Partly because of pressure, the lobe is thought to contain supercooled water that remains liquid though its temperature is slightly below freezing. The water helps the lobe slide.

Darrow and others theorize after enough debris accumulated, "internal creep" kicked in and the mass started flowing downslope.

Lobe A moves fastest in October, at the end of summer and after months of snowmelt draining inside through cracks. Warmer temperatures and more precipitation associated with climate change also affect the movement of lobes.

FDL-D, which Darrow calls a "monster" because of its tendency to eat researchers' surface markers as it churns downhill, is believed to have started sliding out of its catchment about 15 years ago.

FDL-A, meanwhile, is thought to have been on the move for hundreds of years.

Scientist Ronald Daanen said he hopes to measure the forces involved when the lobe reaches what remains of the road. It could help provide clues on how man-made barriers affect lobes and other forces of nature.

Daanen, who worked at UAF with Darrow and is now a geologist with the Alaska Department of Natural Resources, said evidence indicates the lobe is shoving earth in front like a bulldozer. That suggests it will wipe out the road, instead of flowing over it.

On Wednesday, the lobe was 95 feet from the Dalton. Its leading edge has begun to enter the highway right of way, said Currey. It's causing mud and gravel to clog drainage pipes.

"It's increasing the maintenance burden already," he said.

The realignment is part of a previously planned, roughly $25 million project to rebuild about 15 miles of highway. The state will provide a 9 percent match to the federally funded project.

The realignment adds about $2 million to the job, Currey estimated. Permafrost must be excavated and backfilled with gravel to support the road. About 2,000 dump-truck loads of gravel will be required, he estimated.

Engineers have considered other options to deal with the giant road hazard, he said. Building a bridge to slide the debris pile over the highway would have been a costly, monumental project.

Dismantling the lobe with heavy equipment was too risky. It could become "destabilized" with its front removed, potentially causing it to flow faster than it could be hauled off. The permafrost and debris in the lobe could fill about 200,000 dump-trucks, Currey estimated.

Building something similar to a French drain, a trench with rocks to remove water as the lobe passed over, might have stabilized its movement. But experts feared it would cause a pressure buildup toward the back of the lobe, leading to a dangerous release.

The "well-away option" of moving the road was the safest approach, said Currey. The work must be completed by the end of 2019.

The state is seeking contractors for the project, with bids to be opened this summer.

"Time is of the essence," he said. "It's not a crisis, I don't think, if we don't complete realignment this winter. But if it's not done in the next couple winters, things will get awful tight."