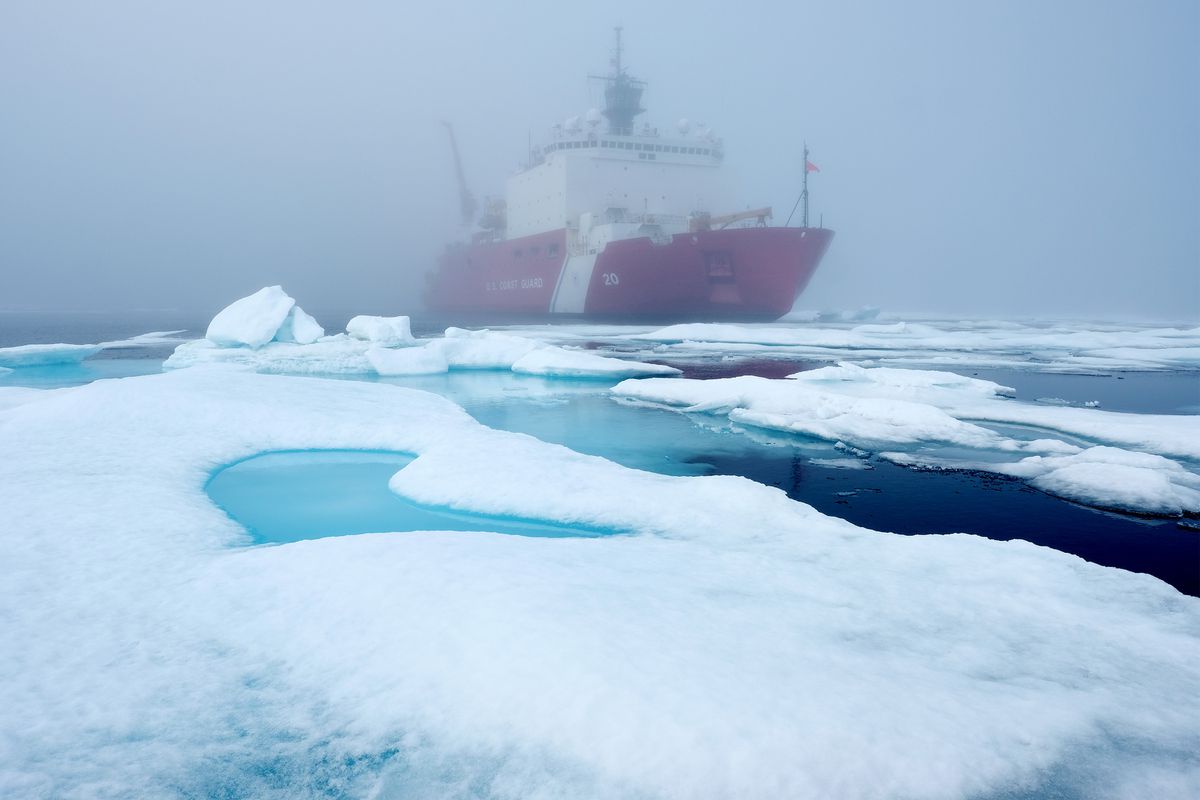 Ice floes and fog surround the U.S. Coast Guard Cutter Healy in the Arctic Ocean on July 29, 2017. The cutter is the largest icebreaker in the Coast Guard and serves as a platform for scientific research. (Washington Post photo by Bonnie Jo Mount)

Ice floes and fog surround the U.S. Coast Guard Cutter Healy in the Arctic Ocean on July 29, 2017. The cutter is the largest icebreaker in the Coast Guard and serves as a platform for scientific research. (Washington Post photo by Bonnie Jo Mount)

The Coast Guard’s new strategy for the Arctic calls for upgrading ships, aircraft and unmanned systems there, an effort to make sure the United States is “projecting sovereignty” into an increasingly contested region, the service’s top officer said.

Adm. Karl Schultz, the commandant of the Coast Guard, said in an interview that the shift is a "little bit different," although existing Arctic efforts will continue.

"Before, it was a peaceful, safe, secure Arctic collaboration," he said. "None of that goes away. We want the Arctic to be a peaceful place where we work to cross international lines here with partner nations that share interests in a transparent fashion. But I think if you're looking around at what's going on in the Arctic, I would say it's maybe trending in a slightly different direction. This will pivot with a little more focus on projecting."

The 48-page document is being released amid concerns in Washington about actions by both China and Russia in the Arctic. It comes as the Defense Department, at the direction of Congress, prepares its own new Arctic strategy that is due to be provided to lawmakers in June.

China, despite its geography, has declared itself a “near-Arctic state,” has begun building icebreaker ships and has said it wants to build a “Polar Silk Road” in which goods can be delivered from China to Europe through the Arctic Ocean as ice in waterways diminish.

Russia also has increasingly focused on the Arctic, expanding its fleet of icebreakers to more than 40, reopening Cold War-era military bases above the Arctic Circle and making plans to deploy antiaircraft missiles on some of them.

The Coast Guard, as part of the Department of Homeland Security, is unlikely to have the primary role if open conflict ever broke out in the Arctic. But the service highlights in its new strategy a perceived need to "retool existing concepts of operation to maximize the impact of more capable assets," presumably from the Defense Department.

"The Service will make integrated operations with joint service, interagency and allied partners a critical element of current and future strategic and operations plans," the Coast Guard strategy says.

The Coast Guard currently has only two surface ships capable of sailing in icy parts of the Arctic, and the Navy has none. President Donald Trump and Congress approved $655 million to begin building the first of what the Coast Guard sees as a new fleet of up to six polar security cutters, but the service also highlights a variety of other needs it sees in the region, especially improving limited communications networks.

The strategy commits to holding the line against “competitors” who do not respect “international order.”

"A key element of the strategies of our competitors is to engage in activities that weaken the international order that underpins a free and open maritime domain," the strategy says. "They do so under a cloud of ambiguity that makes it difficult to mount an effective or timely response to such activities. Clear and universally held norms, coupled with transparency, can dissipate that cloud."

The document does not use the phrase "climate change," a politically sensitive issue given Trump's open skepticism of it. But the strategy does highlight how "reductions in permanent sea ice have exposed coastal borders and facilitated increased human and economic activity" in the Arctic.

The warming of the Arctic has led to longer and larger windows of reduced ice conditions," the strategy says. “From 2006 to2018, satellite imagery observed the 12 lowest Arctic ice extents on record.”