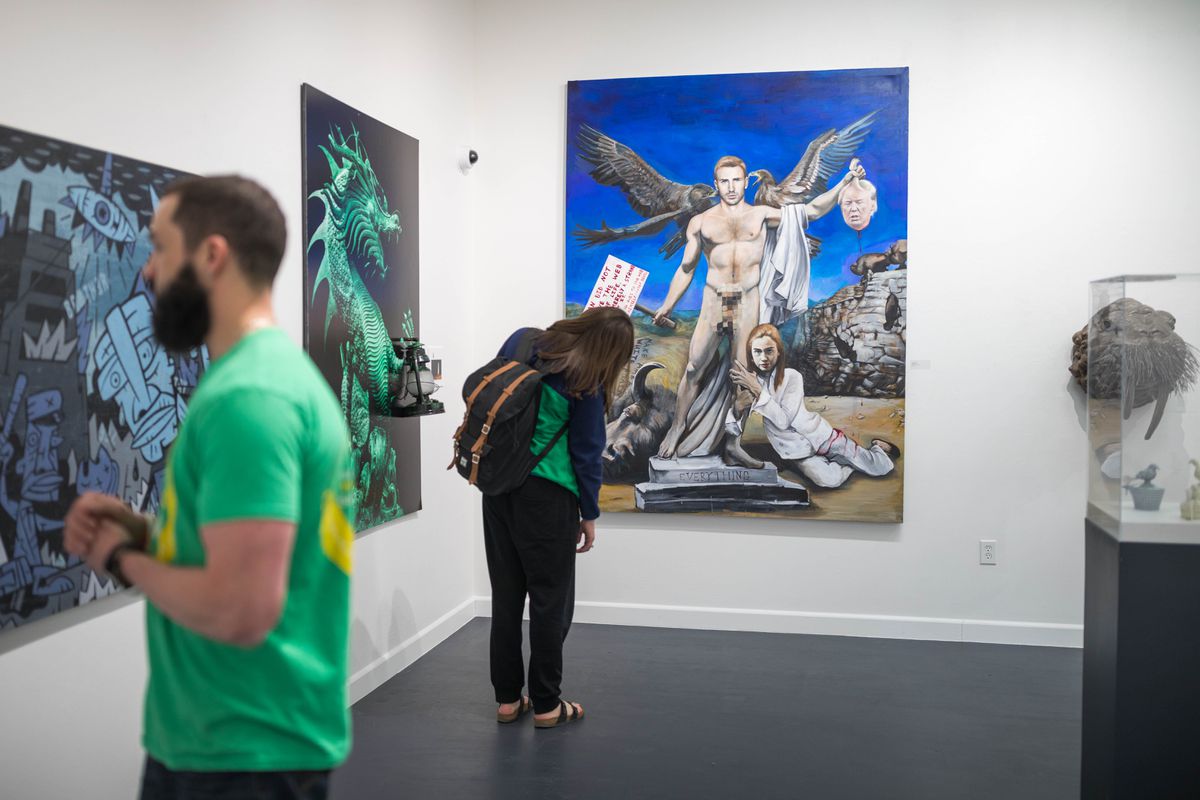 UAA engineering student Delphine Dyer views professor Thomas Chung’s painting “Everything” at the UAA Kimura Gallery on Thursday. The painting, which features the severed head of Donald Trump, has generated some controversy and led to threats against Chung. (Loren Holmes / Alaska Dispatch News)

UAA engineering student Delphine Dyer views professor Thomas Chung’s painting “Everything” at the UAA Kimura Gallery on Thursday. The painting, which features the severed head of Donald Trump, has generated some controversy and led to threats against Chung. (Loren Holmes / Alaska Dispatch News)

A University of Alaska Anchorage professor's dramatic painting of "Captain America" actor Chris Evans holding the severed head of President Donald Trump by the hair has prompted hate mail and threats causing the artist to request a police escort.

"The school was receiving calls from people trying to find out what classrooms I taught in. That's when it seemed like we needed some kind of security," said the artist, assistant professor of painting Thomas Chung.

"I have a police escort taking me to and from class and standing outside the classroom so my students and myself are safe. That's my biggest concern."

The University Police Department is armed and offers escorts to anyone on campus who needs help or feels they need protection.

Chung's painting was part of a faculty art show in the university's Kimura Gallery. The exhibit closed Thursday, and had been on display for more than a month before the controversy erupted.

"The exhibit just showed what the faculty members are working on in their own practices. I would never force my political beliefs on my students," Chung said. "I urge my students to make pieces that address cultural or political issues and I've had students with views that couldn't be further from my beliefs."

It wasn't until Tuesday that former UAA adjunct instructor Paul Berger drew wide attention to the painting. Berger posted an image of the painting on Facebook and questioned whether it was appropriate for a public university to display.

Local TV stations then began covering the story. Chung said the combination of the Facebook post and TV coverage triggered a deluge of menacing messages.

"The first one said 'Go Kill Yourself,' " Chung said. He added that the vast majority of emails contain slurs about his sexual orientation and Chinese heritage. "At first I was totally shocked because the painting had been up for so long. I've never been the target of internet trolls. I've never felt the full force."

On Wednesday, University of Alaska President Jim Johnsen issued a statement addressing the concerns about the artwork.

"A vital and vibrant university, regardless of the campus, must be a place of ideas and debate," Johnsen wrote, "…a place where the most controversial ideas abound, and where assumptions and positions are openly tested."

Johnsen told Alaska Dispatch News that there is no policy regarding art displayed on campus, "but the university Board of Regents' policy expressly protects academic freedom and free speech."

Johnsen said he wasn't aware of any complaints before conflict started spreading on social media earlier this week. National conservative sites like foxnewsinsider.com and thegateway.pundit.com have also picked up the story.

Not all have been negative, he said.

"We also have received a large number of emails and calls in support of the university's commitment to free speech and expression," Johnsen said.

Johnsen summed up the gist of the complaints shared with the school and on social media.

"They are disgusted by the content of this piece of art and outraged at the portrayal of President Trump and/or Mrs. Clinton in this manner," he said. "In some cases, individuals support freedom of expression, but feel this particular piece is politically polarizing and in extremely bad taste."

In the painting, a college-age Hillary Clinton in a blood-spattered white pantsuit is shown clinging to Chris Evans' leg.

"It doesn't necessarily paint Hillary in a very positive light either," Chung said.

Chung added that the painting is more about what Trump represents rather than the president himself.  He said he based the work on a sculpture of Perseus and Medusa. In Greek mythology, the half-god, half-mortal Perseus decapitates Medusa and uses her snake-covered head as a weapon.

Chung decided to make Chris Evans his Perseus because the actor portrays the iconic "Captain America" and Evans also tweeted his disappointment about Trump being elected.

This is the second time this year a UAA art show has sparked public outcry.

In February, people complained about the student exhibit "Her" in the student union gallery because the show's paintings of nude women were visible from the hallway.

The university responded by blocking the gallery windows with panels and "Her" exhibition posters, but the show itself  proceeded as planned.

UAA Director of Student Life and Leadership Annie Route said the rules are different for that building because it is non-academic.

"Outside the (student union) gallery is a public space and you don't expect to see a nude while you're walking down the hallway," Route said.

President Johnsen's office said he was not involved in the decision to cover the windows of the building, and no statement was issued regarding the exhibit.

As for Chung, he said he's been receiving interview requests from conservative publications and is inclined not to respond.

"I imagine this will blow over pretty fast," he said.

He is also trying to look at his time as a troll target as a learning experience.

"It's been a fascinating and scary experience to have these things directed at me," he said.  "As an artist my focus is human nature, and the comments say more about human nature than any of my work ever could."