Cyrano's Theatre Company will move to East Anchorage, taking over Out North building 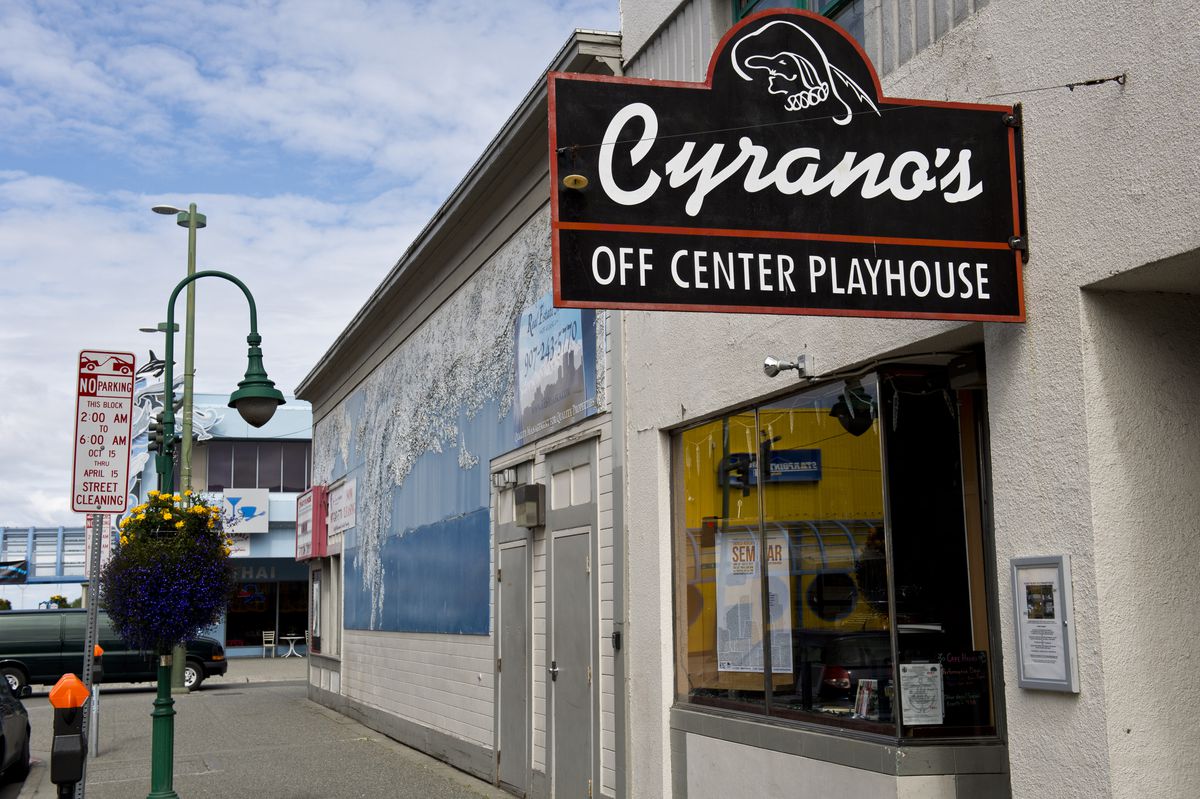 The Anchorage institution, founded by Sandy and Jerry Harper in 1992, is moving from the corner of Fourth Avenue and D Street to the former Out North Contemporary Art House headquarters in East Anchorage.

In turn, Out North is moving downtown to the gallery at the Alaska Experience Theatre.

Cyrano's plans to have its new venue up and running by this fall, said Producing Artistic Director Teresa Pond. Cyrano's Theatre Company is a nonprofit with its own board. Cyrano's Off Center Playhouse has been the company's venue for 25 years.

"We love our downtown home, and we're certainly not (leaving) without mixed feelings. We adore what Sandy has built and she is an integral part of our family," Pond said. "It's a big change for everybody who supports us. But we're in our 25th year and looking at possibilities for growth and working with partners."

Pond, who took over as producing artistic director of Cyrano's after Harper retired at the end of 2015, said part of the reason for the move was a need to cut costs. Pond said Cyrano's was struggling to pay the rent in the downtown space. Harper owns the Loussac Building, which houses Cyrano's Off Center Playhouse. Harper said rent has been the same for many years, and she was depending on the income for her retirement.

"We did ask (Harper) if she would be able to lower the rent and she thought about it and decided she couldn't go lower," Pond said.

Harper said she is adjusting  to the upcoming change.

Harper said she doesn't know what she is going to do with the space. She also said it's odd she has to worry about it now, considering the company and venue's history.

"There's a certain irony to this because the only reason Cyrano's Off Center Playhouse exists and that we created a theater company, was to save the building after the economy tanked in the late '80s," Harper said. "We did have a lease with the police department at that time. As soon as the lease was up in 1992, they left and we had to underwrite the conversion of the space into a theater company."

From 1992 to 2005, the venue was Cyrano's Off Center Theatre, but the company's name was Eccentric Theatre Company.

"The board (ultimately) decided to call it Cyrano's Theatre Company because people would always say, 'We're going to Cyrano's,' " Harper said.

Out North moves to downtown

Out North Theatre Company started as an alternative performing arts organization in 1985 and has been putting on productions in its East Anchorage building since the '90s.

The Municipality of Anchorage deeded the former Grandview Gardens Library on DeBarr Road to Out North in 2004. But, citing financial difficulties, Out North stopped daily operations and laid off its staff in 2013. Since, the building has been used occasionally for shows and special events.

Being responsible for the building, which is in need of roof repairs and more work, has become a burden, said Out North board member Indra Arriaga. She added that Out North simply doesn't need such a large building.

"The building was such an albatross around our neck," Arriaga said.

Leaving it behind "is a really nice way to get a fresh start and really start focusing on programming," Arriaga said before an art opening downtown earlier this month.

Last winter, soon after trying to negotiate a lower rent for Cyrano's, Pond talked to Arriaga and found out about Out North's plans to relocate. "This opportunity then came along, and the roads intersected," Pond said.

In May, the Anchorage Assembly approved changes in the language in the East Anchorage building's deed of trust. The alteration allows Out North to transfer the deed to Cyrano's. The Out North building is owned by the Municipality of Anchorage. The official signing over of the deed will happen next week, Pond said.

Pond said the bigger space will give Cyrano's more chances to partner with and be an umbrella organization for other arts entities. It also presents new performance options.

"There are a lot of exciting possibilities about the space. This is a building that has a big black box stage and two studio gallery spaces that could be smaller spaces to perform or rehearse or such things," Pond said.

"We'll be able to do a wider variety of types of work. We could do larger sets. We could do more multimedia kinds of work. And there certainly is a possibility to have more than one event happening at the same time, or an art gallery."

At the new building, Cyrano's will be expected to pay bills and maintenance, but no rent.

"We will be in a deed of trust for seven years before owning it outright," Pond said.

Pond said she has had the building inspected and she's convinced Cyrano's can handle the repairs that need to be made.

"We're not finding it to be in that bad of shape … the bones are good," she said. "We would like to get some repairs started on it. We're applying for some grant money."

Pond said she isn't worried about audiences shrinking as a result of relocating.

"We feel that our audiences like what we do and will want to see it in a new space," she said.

As for Out North, the arts nonprofit will be an independent producer putting on shows and events at the gallery at the Alaska Experience Theatre. But they won't be the only occupant.

They are sharing the space with KONR-106.1 radio, and other organizations will also use it.

Out North is currently doing a test run of the space with "Trumpazo," an art show of pieces reacting to the Trump administration, that runs through the first weekend in July.

Arriaga said Out North will officially start using the downtown space for shows this fall.

"I like that we don't have to worry about leaking roofs and things like that," Arriaga said. "It's a huge change for us but it's also a huge opportunity."