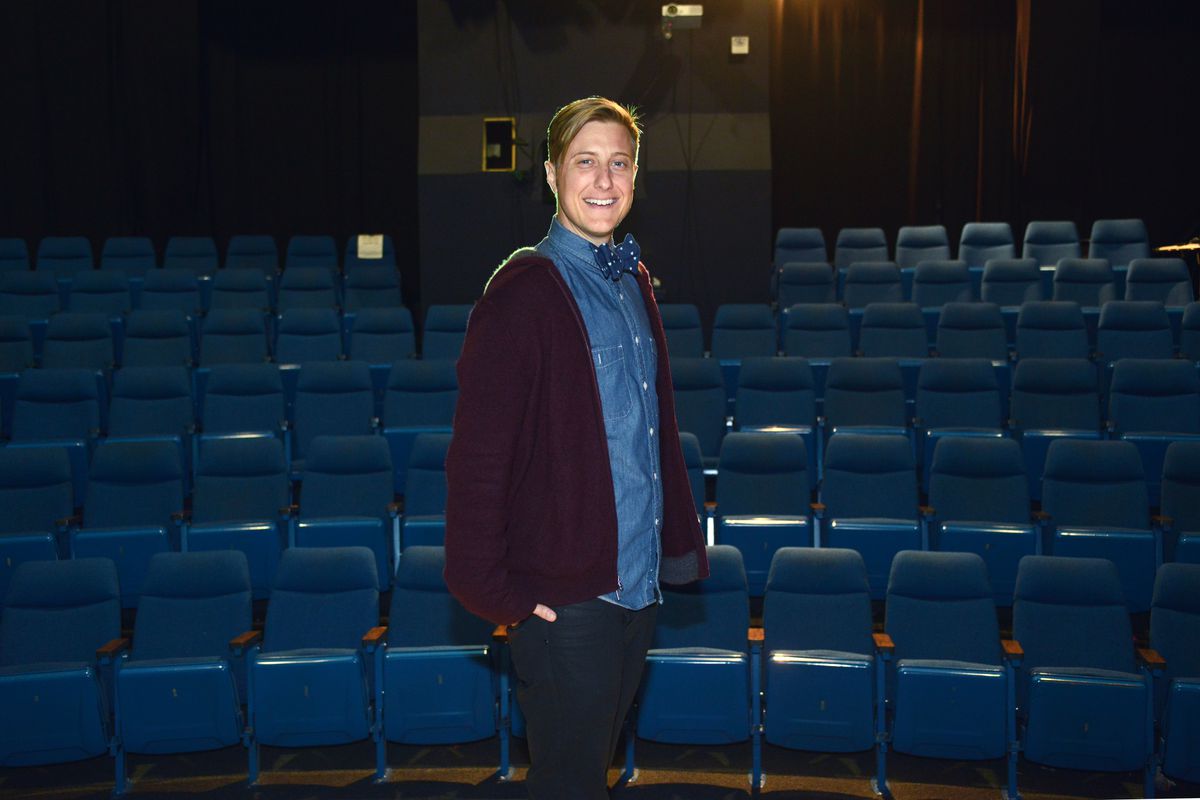 During Scott Turner Schofield's show, "Becoming a Man in 127 Easy Steps," the transgender actor and activist asks the audience to call out numbers between one and 127, and then shares the corresponding "step."

Here's a preview of what you'll get if you shout "71" at Schofield's performance this weekend:

"I'm using the men's locker room in L.A. Fitness on Hollywood Boulevard and I hadn't had any surgeries yet and my towel fell off. I was standing there completely naked in a female body in the middle of this totally full men's locker room, and to me it was this traumatic moment," he said. "I thought, 'this is the moment where something really bad happens to me.' But in fact, nothing at all happened to me. Everyone else was so self-conscious that nobody even noticed."

Schofield, who plays a trans character on TV show "The Bold and The Beautiful," and served as artistic director of Anchorage's Out North Contemporary Art House from 2009 to 2012, has been perfecting and performing "127 Steps" for more than a decade. At the show here in Anchorage, Schofield will be accompanied by his partner, YouTube star Terra Naomi, who will be playing an improvised soundtrack.

Hollywood producer Andrea James is working with Schofield to turn "127 Steps" into a feature film, and they're in the process of conceiving the best way to translate it from stage to screen.

We chatted with Schofield about Out North, transitioning and the challenges trans actors face.

A: It's such a silly and epic number. My friend Bear Bergman came up with the title 10 years ago. He was just being silly. And as all good artists do, I stole the title. There are 127 different stories that I tell, and you maybe hear six to 10 stories a night, so it's always a different show. If you have a transgender person in your life or just want to understand what it's about, you'll get really in-depth, good stories about it. And if you're transgender yourself you'll hear parts of your story reflected back to you.

Q: Does performing at Out North have extra significance for you?

A: I'm at this very special stage creatively with this project where I'm taking it from being a theater show to a movie. That's what I'm experimenting with at Out North. I've got this super safe space where I trust everybody. They'll be able to give me really smart feedback.

Q: Were you afraid Out North was done for good when it temporarily shut down in 2013?

A: There's a natural life cycle to nonprofit organizations. It's a spiral. You're either on the upward spiral or the downward spiral. I was not surprised when that happened, and I kept in touch and watched with pure admiration at the way they creatively continued forward. All arts organizations have to really get creative to stay alive in this day and age. All the ups and downs are part of the creative story. It's a really incredible and heartwarming, not without drama, story.

Q: How do you feel about Out North relocating from DeBarr Road to downtown?

A: I felt emotionally attached to the DeBarr Road building. The first thing I did when I became artistic director was paint it. I love that building and how bright and vibrant it was with all that room for people to do things. But a space can be a real drag on a small production company. Out North is an entity. It doesn't have to have a space. It has a brand. People know what they're getting. It's risky and really cool.

Q: You have been at events all over the place this Pride season, from California to Michigan to New York and now to Alaska. What's the buzz around the country?

A: There's this big discussion about trans representation in film and television, about whether we should have trans actors play trans roles. There was this party I just went to for this wonderful film called "And Then There Was Eve," and the lead actress is a woman named Rachel Crowl. She's a trans woman and she had this unbelievable performance. And another movie came out (at the same time) with a cisgender man playing a trans character, a much more famous person, and it's like nobody's even talking about this amazing accomplishment for Rachel.

Q: Would you define cisgender for us?

A: Cisgender is a nonjudgmental and scientific term to describe people who are not transgender. Cis is Latin for "on this side of." Ninety-five percent of people's sex is on the same side of their gender, while for me, there was a journey.

Q: As a cisgender man, does Jeffrey Tambor make playing a trans character work on "Transparent"?

A: Tambor is a really interesting case. Unlike any of the other cisgender men who have played transgender women, he gives free acting classes to trans actors in Hollywood. He is an active, out-there ally. I love him. He gets a pass from me, and I think he gets a pass from most people. It's not about how good of an actor he is, it's about him recognizing and calling out an unjust system that leaves the rest of us out of work.

Q: Does anyone else come close to doing it as well as Tambor?

Q: So, should cisgender actors never be allowed to play trans characters?

A: Here's the thing. We can't be black and white on this issue. But I'm a transgender actor and when cisgender actors take my roles I am not economically served. What we're mad about is the inequality. At the same time, I'm an actor and I am all for anyone playing whatever roles they want to play because it's art. When transgender actors can be hired without bias for quite some time, (it won't be as much of an issue). Transgender people are already two to four times more likely to be unemployed than anybody else, and that's just if you wanted to work retail. In Hollywood it's infinitely more difficult.

Q: What are your thoughts on how trans people are portrayed in TV and movies?

A: What you see in the mainstream right now is kind of like "Transparent." You see the beginning of somebody's transition, and everyone around them dealing with it, and that's the only story that's being told about transgender people right now because that's where the world is.

Q: When did you transition?

A: That's a complicated question. We're all transitioning all the time. I didn't know the word "transgender" until I was 20. I started my medical transition when I was 24, but it's much more complicated than that. Caitlyn Jenner really messed things up for people. Because she had all the money in the world, she could just be interviewed by Barbara Walters in February, and in June be a gorgeous woman. She could snap her fingers and drop $90,000 and that's what people think transition is. It took me 10 years with the medical transition to where I feel I'm done with that. I've been out 10 times longer than Caitlyn Jenner has. There is so much more of a story to tell.

Q: What are stupid questions to ask a trans person? I guess one is, 'When did you transition?' because it's a process rather than a moment.

A: It's not a stupid question. It's just that trans people are really complex. We live in a world that thinks there are only two ways to be a person and we're already beyond that. The really offensive things people say have to do with the body. If you were at work and you asked anybody anything to do with their body you'd be up for a sexual harassment suit.

Q: You mean people asking if you had full gender reassignment surgery?  I have to admit I'm curious.

A: I totally get it. It's human curiosity and most people want to know because they just want to know how to be good to other people. But the problem is, for me as a trans person going around talking to people every day, over half of my day could be spent talking about my genitals because people are so curious. Also, it's a really loaded question. With most people, the moment I say I'm transgender, I see their faces change. I know what's coming next, and suddenly we're in the genitals conversation. Whatever else we were going to talk about has gone out the window. It's gross. You will learn in the show about my genitals, but you will learn so much more.

Q: Are you heartened by people becoming increasingly sensitive to the transgender community?

A: I have been doing this work for over 15 years, and for the first 12 years it was pretty hard going. I felt like I was never making any inroads. Most people in the last four years have started really supporting transgender people in very sensitive ways than in the last 12 years before combined, and that's in part due to things like Laverne Cox and the transgender tipping point happening in U.S. culture. There's actually never been a better time to be trans.

Becoming a Man in 127 Easy Steps