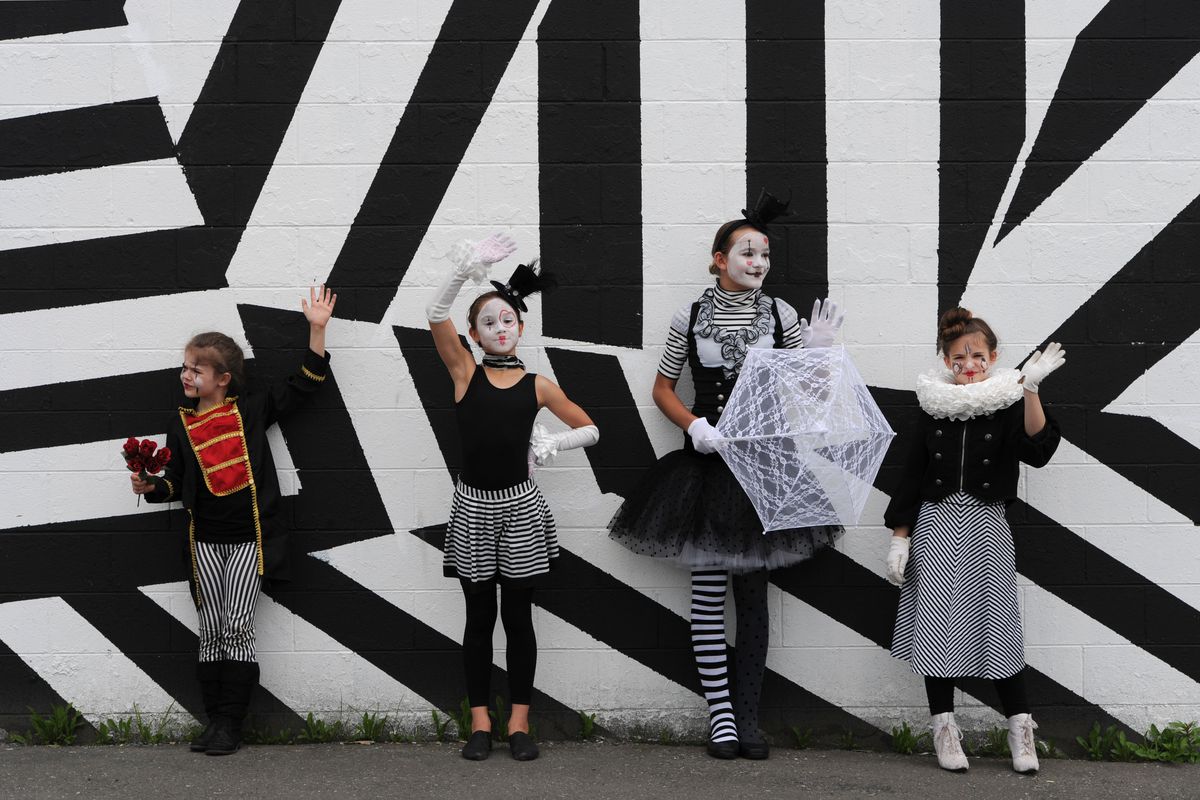 In a mess of concrete, dirt and asphalt, three young mimes pose mournfully around a bent and fallen traffic cone.

It may sound like a post-apocalyptic experimental French film, but it's simply the scene at the construction-clogged intersection of Spenard Road and Fireweed Lane on a Monday, July 10, around 6 p.m.

The mimes, part of the MimeSpenard community performance art project, pranced up Spenard Road with their red balloons bobbing. They hung on fences, struck poses against the black-and-white painted wall across from REI and waved to drivers.

"The Spenard mimes are there to silently represent the everyday pedestrian of Spenard," said someone representing MimeSpenard, who refused to give a name, in an email.

According to the email, the mimes are hoping to "provide a playful approach" to keep people coming to — and shopping in — Spenard during the construction happening this summer.

"By being a visible and playful presence, they are creating a positive experience for those impacted by the road reconstruction project."

The mimes hope to keep details of the project secret until it ends on Aug. 12. They are getting funding, but wouldn't identify the source, saying the donors want to be anonymous until the project concludes. The city and the State Council on the Arts both said they're not funding the project.

While the mimes said they want their identities to remain mysterious, a simple social media search reveals at least two of them are well-known local artists Brian Hutton and Keren Lowell.

The information from the anonymous MimeSpenard rep was verified by Lowell and Rebecca Carr Brubaker, who has been involved in the project and whose daughter Bright Carr, 12, was one of the young mimes in Spenard last Monday.

The first MimeSpenard appearance was on June 8 at the Spenard Food Truck Carnival.

Since then, the silent performance artists have been spotted at locations including Bear Tooth Theatrepub and Bosco's. And they can frequently be found clowning around the construction site. According to the email from MimeSpenard, the construction crews are "fully aware and supportive of" the mime activity around the work sites.

[A well-trafficked Spenard corner has big changes in store]

The mimes range widely in age. "So far, our youngest is 11 weeks and our oldest — well, it's not polite to ask," read the email.

The mimes have been posting not-so-cryptic hints about their next outings on the MimeSpenard Facebook page a day to a few hours before their appearances.

The event they're promoting most heavily is a Super Saturated Sugar Strings show on July 20 at 6 p.m. The particular Spenard location of the show won't be supplied until shortly before the event.

The popular local band has a third album set for release this summer, but the show will be "an early pre-release," according to the email.

Interested parties can sign up to get the location as soon as it's available through mimespenard.com. There are also murmurs of a mime day and a mime parade. The spokesperson said some major mime event will most likely happen on Aug. 12.

According to Brubaker, the mimes are taking their roles seriously.

"There have been sneaky mime trainings in various locations — very fun and community-building," Brubaker said. "The training involved working very hard to balance an invisible conceptual ball and work with partners."

Brubaker said mimes tend to suddenly vanish once their work is done.

"Mimes are like Pete's Dragon," Brubaker said. "They go where they are needed and disappear when they're no longer needed."