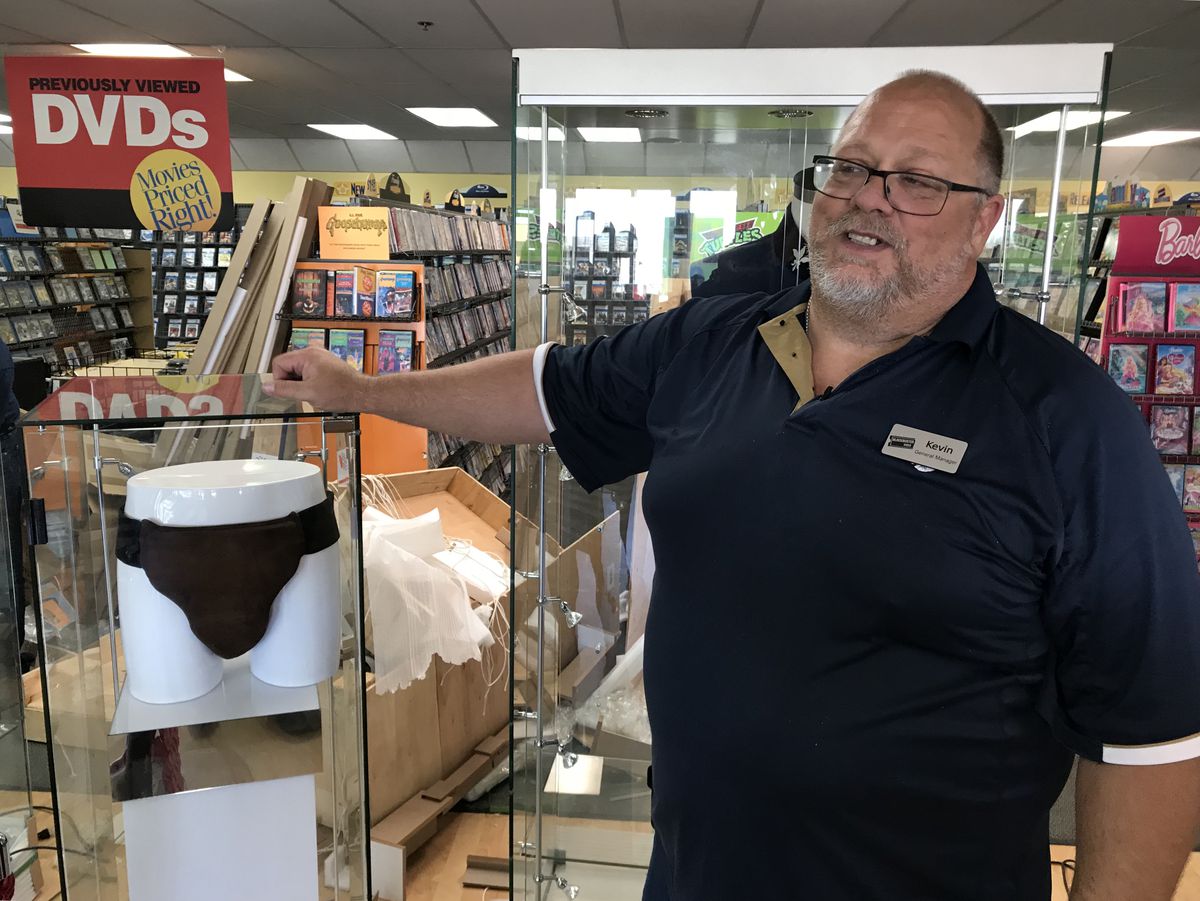 General manager Kevin Daymude poses with Russell Crowe movie memorabilia at the Blockbuster store on DeBarr Road in Anchorage on Wednesday, May 2, 2018. Pictured at left is the leather jockstrap Crowe wore in the movie “Cinderella Man.” (Bill Roth / ADN)

General manager Kevin Daymude poses with Russell Crowe movie memorabilia at the Blockbuster store on DeBarr Road in Anchorage on Wednesday, May 2, 2018. Pictured at left is the leather jockstrap Crowe wore in the movie “Cinderella Man.” (Bill Roth / ADN)

The jockstrap has arrived.

Employees and customers are in on the joke and playing along.

Along with the jockstrap, the Blockbuster was also gifted a vest Crowe wore in 2012's "Les Miserables," a robe and boxing shorts also from "Cinderella Man," a hood from 2010's "Robin Hood" and both Crowe and Denzel Washington's set chairs from 2007's Oscar-nominated "American Gangster."

But the most talked-about item, Daymude said, is undoubtedly the jockstrap worn by Crowe during the filming of "Cinderella Man."

"We have all this memorabilia and the only thing (people) care about is the leather jockstrap," he said.

The spot culminates in the unveiling of memorabilia purchased for the Anchorage shop, which Oliver suggests could be used to draw people into the store.

[Even in Alaska, Blockbuster is fading. 'We're just managing the decline as best we can.']

The jockstrap — sold at an auction Crowe had arranged to celebrate his divorce — went for $7,000.

"I did not know this was going to happen. I had no idea," Daymude said Wednesday.

Daymude initially didn't see the episode. On the same evening it aired, he checked the DeBarr Blockbuster's Facebook page and saw it had received 51 direct messages.

He later watched the segment. The shop was given 48 hours to contact "Last Week Tonight" to claim the memorabilia.

"It was crazy," Daymude said of his attempts to make contact with the show's producers. "You wouldn't believe how many phone calls I got from people trying to help us get a hold of these guys."

Eventually, a man from Wisconsin said his cousin worked at HBO and gave Daymude a number for the front office, Daymude said.

Even then, Daymude didn't really think the memorabilia would wind up at his store.

"I figured we'd get pictures, or something like that," Daymude said.

When asked by a reporter if he was planning to have a "jockstrap grand opening," Daymude laughed.

"I never thought of that," he said.

The memorabilia will be displayed near the front of the store. "As soon as you walk in, you'll see it," Daymude said.

"People call up and say, 'If we gave you $20, can I get a picture of myself in the jockstrap?' " Daymude said.