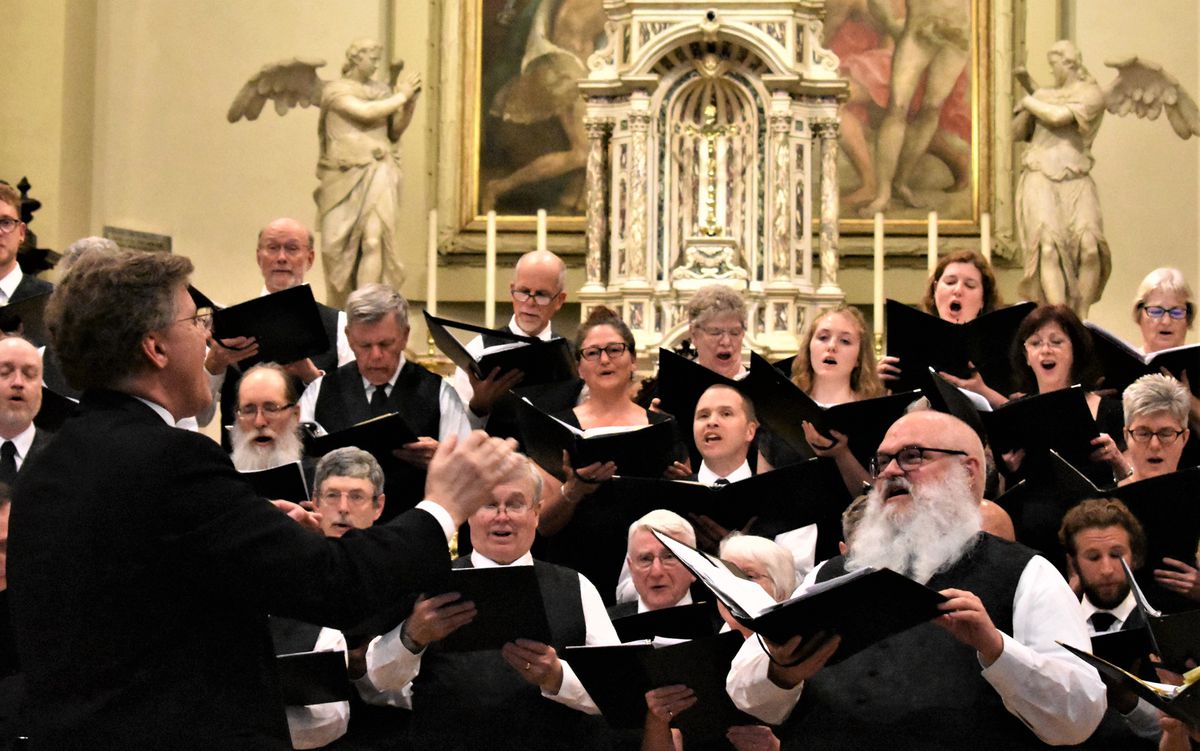 The Anchorage Concert Chorus tour chorus performs in Pordenone, Italy, during a tour of the country in 2018. (Photo by Cindy Crewdson)

The Anchorage Concert Chorus tour chorus performs in Pordenone, Italy, during a tour of the country in 2018. (Photo by Cindy Crewdson)

When Roland Rydstrom and Grant Cochran sat down to chart the course for the 2018-19 season of the Anchorage Concert Choir, they identified a few targets.

They wanted to develop an opening program that would be present, ambitious and most importantly, uniquely Alaskan.

With "One Voice: Music and Stories of Alaska," they believe they've hit all those touchstones.

The show, which opens Sunday, includes composer Emerson Eads' Fairbanks Four rumination "Mass for the Oppressed," a collaborative performance with Yup'ik group Pamyua and a commissioned piece based on John Muir's "Travels in Alaska."

"We did set out to do some stuff that's beautiful and important music and also relevant," said Rydstrom, the ACC executive director. "We wanted to look at some things we wouldn't normally look to program and focusing on Alaska was a priority."

Cochran, the ACC conductor and artistic director, knew Eads — but not as a composer.

"I started thinking of Alaska composers and I'd worked with a young man named Emerson Eads with the Anchorage Opera," Cochran said. "He was singing tenor. In my mind, Emerson was a singer from Fairbanks. I knew he'd done some conducting up there but I didn't know he was a composer. I listened to it on YouTube and got really excited about it."

Eads was completing a graduate degree at Notre Dame when he started work on the piece.

"Having been in Fairbanks, I'd been baptized by all the news about the Fairbanks Four," Eads said. "They had been put in prison the year I graduated from high school so we're about the same age. I was at Notre Dame my first year in grad school when they were released. I wrote the last movement immediately within a few days. It was written with a real irony with joy of their release but that awful realization things are not as they should be. Here I am finishing my degree at a great university and these guys are getting out after spending 18 years in prison wrongfully."

The text of the traditional Latin mass is based on diary entries from Pope Francis along as well as writings of Emerson's brother, Evan Eads.

The piece, which debuted at the Fairbanks Summer Arts Festival in July 2016, is unique from other masses in that it emphasizes four soloists who break out from the whole choir.

And while there is a heavy social theme to the mass, Eads believes there is also a more unifying message.

"There's a political aspect to the piece," he said. "There are people who still believe they're guilty.

"There are a lot of political ramifications around the piece, people really connected to the emotional arc and the message of the piece. Instead of getting hung up on the politics of the actual issues of the Fairbanks Four, more broadly addressing what it's like to be oppressed."

"To Have Been There Before," based on Muir's "Travels in Alaska," was commissioned by ACC with funding from the Atwood Foundation.

He used Muir's words on a single pitch as sort of a chant, with the orchestral music swirling around to mimic the natural landscape Muir encountered.

"It's truly about the environment around the words," he said.

He superimposed those voices over a color wheel and the circle of fifths, using matching tonal locations when Muir describes the colors he sees.

"A lot of the composition is around colors," Banks said. "He goes into a forest and talks about layers of moss growing on the trees and in the forest, and it's all yellow. When he's in the Alexander Archipelago, there's a lot of green. He writes about a crimson sunrise."

A portion of the music will be sung in Tlingit, which made for some interesting translations along the color wheel, according to Banks. For instance, there is no Tlingit word for purple, he said, so they described the color as "blueberry juice."

The 11-chapter composition was delivered in three installments, which presented some challenges for Cochran and the singers.

"(With most pieces) there's a familiarity with the melody and the harmony," he said. "This is beyond anything we've ever done. Not knowing what to expect was really the single greatest challenge I faced getting things ready. There is probably more text per minute than in any other concert I've prepared."

To complete the opening program, Rydstrom and Cochran added Pamyua, an Inuit group formed over 20 years ago by brothers Phillip and Stephen Blanchett. Pamyua will perform some original material before teaming with the chorus and orchestra.

"It really is all about connecting with our heritage and having the group really embrace where we are and take advantage of the performers whose culture comes from the land," Cochran said.