Farewell to the ‘Follies’: Mr. Whitekeys says his shows are ending — for good, this time 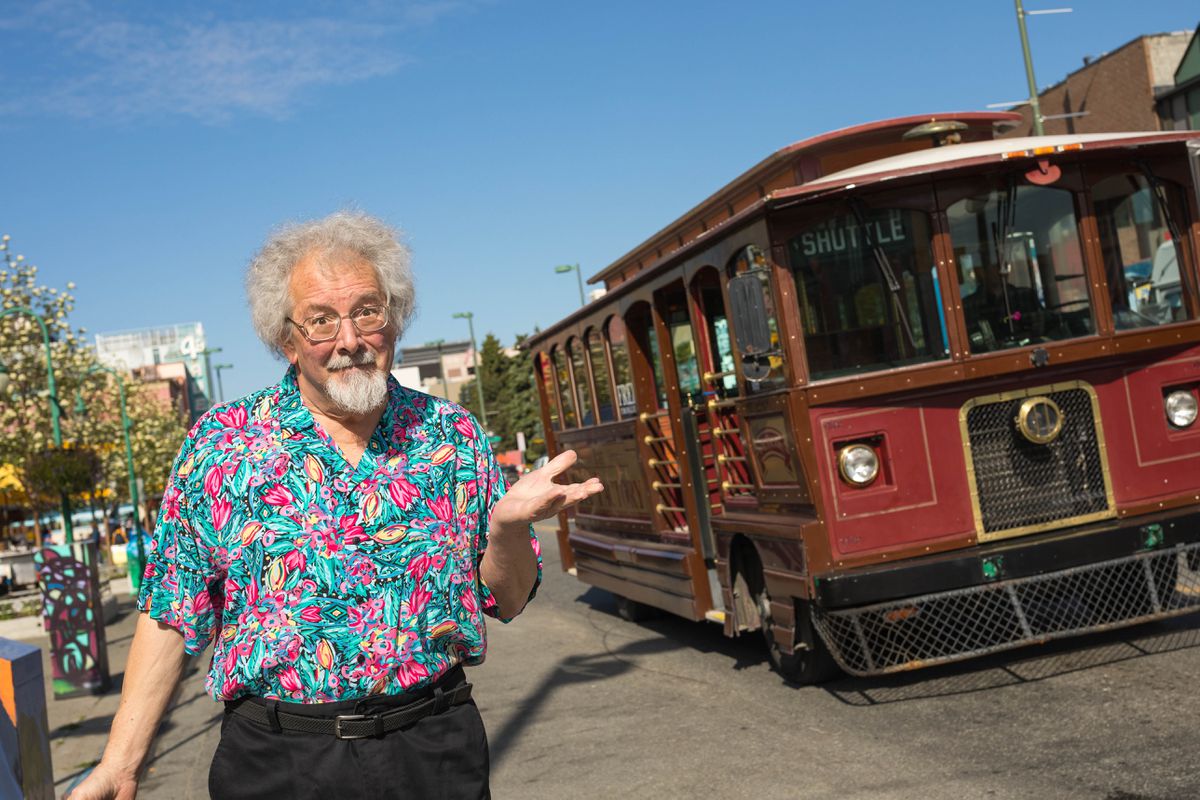 Mr. Whitekeys in downtown Anchorage on Tuesday, June 11, 2019. Whitekeys is promoting his farewell tour of the Whale Fat Follies, which opens June 24 at the Hard Rock Cafe. (Loren Holmes / ADN)

Mr. Whitekeys in downtown Anchorage on Tuesday, June 11, 2019. Whitekeys is promoting his farewell tour of the Whale Fat Follies, which opens June 24 at the Hard Rock Cafe. (Loren Holmes / ADN)

Mr. Whitekeys is retiring –- and this time, he really means it.

Seriously. He’s hanging it up. The 72-year-old musician and writer swears that this summer’s production of “The Whale Fat Follies” is the absolute last.

Nothing personal, Alaska: “I just want to do different stuff.”

Some people think it’s a hoax. After all, he’s gone away before; his shows disappeared between 2006 and 2011. More to the point, some folks probably aren’t ready to see the end of this particular era. Since the mid-1980s Alaskans have come to rely on his musical revues, which celebrate the sheer cussedness of the Last Frontier.

He claims that’s because Alaska has its own reality. After all, this is a state whose former lieutenant governor had a skill set that included “amateur undertaker.”

“We live in this place that is insane. The longer you’re here the more normal it seems,” Whitekeys says.

“But it’s not normal. And that’s the real story of ‘The Whale Fat Follies.’”

The show began in 1986 as “a six-week experiment,” to get some butts in the seats in the summer. Because the state’s time zone change had resulted in what he called “double Daylight Saving Time,” people were riding bikes and playing softball until 11 p.m. rather than hanging out in bars.

“We were looking for something that would bring people in earlier,” Whitekeys says.

The first show did so well that he added a holiday revue (“Christmas in Spenard”), an early-March incarnation (“Springtime in Spenard”) and, depending on the year, either an autumn- or election-based show (“The Freeze-Up Follies,” “The Ballot Box Follies”).

All featured live music, snide political humor, satirical slide shows, at times crude sight gags and, most important of all, performers who would do anything for a laugh. Whitekeys can be accused (and likely convicted) of many things, but good taste is not one of them.

Thus a character known as “The Turd Fairy” would sing about the springtime phenomenon of coproporphyrinogen (look it up). Also on the subject of feces, a rapping canine named “Snoop Doggy Doo” spotlighted Anchorage’s annual Scoop the Poop Day with (naturally) some “scat singing.”

The Sentimental Sisters duo harmonized the pros and cons of Alaska men (“When his dog bites/When his feet stink/When he’s wearing plaid/I simply remember he works on the Slope – ka-CHING! – and then I don’t feel soooo bad!”). Beelzebub, resplendent in a red tux and light-up horns, revealed his new job (“In charge of customer service down at the DMV”).

The show even featured what was probably the world’s first tap-dancing outhouse. Actor and playwright Jill Bess, who originated the role of “the happy tapper in the snappy crapper,” recalls her time in the Follies as “the happiest two years of my life.”

“It taught me how to work with an audience. To look them in the eye, to push through, to be absolutely in the moment,” she says.

Being in the moment, Whitekeys-style, meant performers doing their best to offend everyone they could, including but not limited to school board candidates, conservatives, Fairbanks residents, marijuana store owners, houseguests from hell, liberals, women who love Barbra Streisand movies, vegetarians, newspaper reporters, libertarians, people who misspell their protest signs, Oprah Winfrey, country music lovers and every sitting president.

While the political humor is frequent (and frequently cutting), the shows don’t take out after elected officials exclusively. “Anybody who’s in the spotlight is fair game,” Whitekeys says.

Sure, the Palin family’s infamous birthday party brawl became the topic of “Startin’ a Fight” (sung to the tune of “Stayin’ Alive”). But a popular recurring gag is based on TV commercials done by a local mattress-store owner, whose gangly dance moves are ably parodied by Cameron Morrison.

A cast member since 2013, Morrison says the show isn’t just Whitekeys’ vision. Thanks to margarita-fueled writing sessions at La Mex or Pancho’s Villa, the entire cast shares the blame for what happens onstage.

“It’s all collaboration. We just have a blast,” Morrison says.

Now that the show is ending, there’s a chance he and fellow cast member Regina McDonald could put together a new show. It won’t be the same, though.

“There probably won’t ever be another Whitekeys,” Morrison says.

Certainly the conditions that created him won’t be repeated. After graduating from Duke University and moving back home to Phoenix, the man who would be Whitekeys started hearing stories about pipeline construction in Alaska. So in 1970 he headed north in a former dog-groomer’s van emblazoned with pictures of a poodle sitting under an old-fashioned hair dryer.

It was a time when you didn’t need training or talent to get a job, Whitekeys says. For one of his first temporary gigs he pretended to know how to use a jackhammer. But his lifelong study of music helped him score a job as piano player at a new bar called Chilkoot Charlie’s.

He became part of a rock ’n’ roll trio; the others were “a bartender who played bass, and an out-of-work traffic controller who also played drums.” They played from 9 p.m. until 4:30 a.m., five nights a week.

Soon he started his own three-man band, the Oosik Music Company, which featured some of his own humorous tunes –- and frequent name changes. Depending on the week, they would appear as The Cowpie Opera, Bitchin’ Ernie and the Grunts, Rudy Palmtree and His Exotic Fruits and, yes, The Whale Fat Follies.

Apparently no one noticed that it was always the same three guys: “It was the ’70s. Everybody was drunk.”

The confusion was understandable even without the alcohol, however. Whitekeys describes the city’s music scene as “legendary.” As Anchorage filled up with workers who had money to burn, you could hear live music five nights a week at as many as 30 bars. Not just a guy with a guitar, or even a rock ’n’ roll trio; there were bands with five or six (or more) players.

“There was nothing else to do in those days,” Whitekeys says. And in that pre-MTV era, “the only way you could see music was to go to a bar.”

Ultimately he became a barkeep himself, taking over the failing Fly By Night Club in 1980 and fronting a house band called The Fabulous Spamtones. This led to a love-hate relationship with the Hormel Company: “They sued us a couple of times.”

Club attendance started dropping in the mid-1990s, which he attributes to the rise of cable TV, movie rentals, video gaming systems and the Internet. By 2000, he says, “people had just stopped going out of their houses.”

Although the musical revues still did well, it took more promoting (and lots more ad money) to make sure all the seats were filled. In 2006, Whitekeys sold the club -– but he didn’t get out of the business entirely. For the next five years, he did satirical revues at private parties and professional conferences. (He fondly recalls the National Association of Corrosion Engineers, “a couple thousand guys who deal with rust.”)

Yet the itch to create – and to make fun of people -– never quite went away, so in 2011 Whitekeys came out of self-imposed exile. First he restaged the shows at the old Fly By Night Club, which by then was “a hippie bar” called the Taproot.

A few years later he moved to the Hard Rock Cafe, performing until 2017. Whitekeys took 2018 off to relax and go on a couple of major bird-watching trips (he’s president of the Anchorage Audubon Society). At that time he promised one more summer show in 2019.

Now he swears that’s really it –- even as he quips that The Rolling Stones have done six farewell tours so far.

“If I live as long as Keith Richards, maybe I’ll come back,” he says. “Anything’s possible.”

Except that he’s absolutely committed to writing a couple of books, one of which is a complicated project about a little-known piece of Alaska exploration history. The other one might be an autobiography.

So yes: No more. This summer is your chance to bid farewell to the last slice of that legendary Anchorage bar scene. Unless, of course, Whitekeys hangs on as long as Keith Richards. Anything’s possible.