Ariel, Ursula and some familiar, catchy tunes headed to Anchorage for ‘The Little Mermaid’ 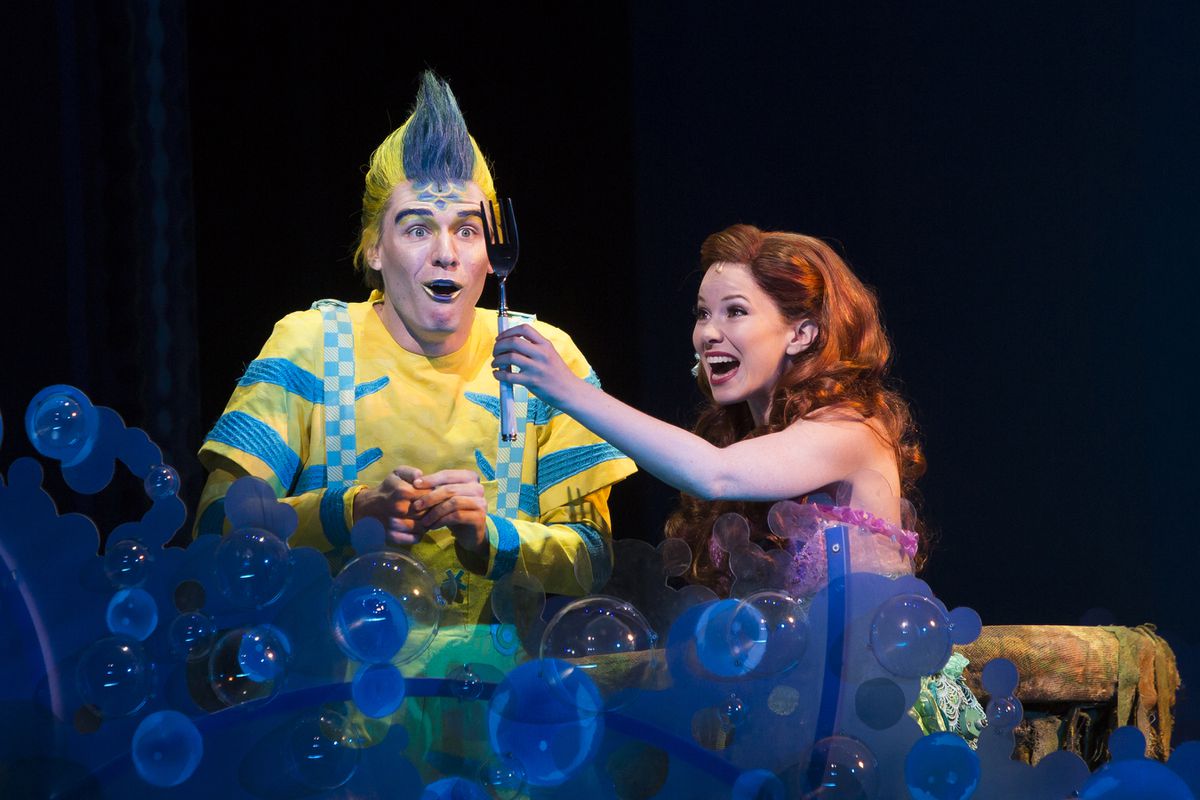 Adam Garst as Flounder and Alison Woods as Ariel in "Disney's The Little Mermaid." (Photo by Bruce Bennett, courtesy of Theatre Under The Stars)

Adam Garst as Flounder and Alison Woods as Ariel in "Disney's The Little Mermaid." (Photo by Bruce Bennett, courtesy of Theatre Under The Stars)

“Disney’s The Little Mermaid” is based on the 1989 Disney animated film, which means that a happy ending is guaranteed. Fans of the movie will be glad to hear that the stage version is fairly faithful to the movie plot and includes a lot of the same music.

Here’s the real question, though: How do they swim?

With wheels, that’s how. Scooters, skateboards and Heelys (wheeled shoes) propel just about everyone around the undersea scenery. The only ocean denizen who strolls rather than rolls is title mermaid Ariel (Madeline Ellingson), who relies on the finned costume plus “a certain kind of physicality” to create the illusion of swimming.

Ellingson is delighted with the role because Ariel was always her favorite Disney princess. She has fond memories of singing and dancing along with the DVD, and channels the movie character’s “goal-oriented, aspirational kind of personality” to tell the story of the mermaid who longs to see a different world.

“A huge thing is making the characters as down-to-earth as possible,” Ellingson says. “You want to make them relatable, so a little boy or little girl coming in can see themselves as Eric or Ariel, and have dreams.”

Prince Eric (Tyler Scherer) has a dream that’s pretty much the same as Ariel’s: to veer off the prescribed path. To do so, the 29-year-old recalls how it feels to be poised on the brink of adulthood, “longing for someone or something out there that you don’t have.”

“And I’m not gonna lie: It’s fun to play a prince,” Scherer says. In fact, he swears that in the past he’s been told he looks like the movie’s Eric.

This production of “Disney’s The Little Mermaid” was produced for the Anchorage Concert Association by Plan-B Entertainment, a company that casts and rehearses in Los Angeles before bringing the production north.

Recent Plan B Entertainment productions like “Peter Pan” and “My Fair Lady” were presented with very minimal scenery. For this show, sets were rented from Music Theatre Wichita, which was one of only three theaters in the United States to produce the musical in 2011.

Because it hadn’t done as well on Broadway as Disney hoped, those three theaters were essentially workshopping the show. Afterward the musical underwent significant rewriting: shorter run time, songs taken out, songs added.

Many of the more hummable hits remain, including “Kiss The Girl,” “Part of Your World” and the show-stopping “Under The Sea.” The music is from Academy Award-winner Alan Menken, and the lyrics are by Howard Ashman and Glenn Slater. The script was written by Doug Wright, who has won both the Tony Award and the Pulitzer Prize.

The show’s Ariel and Eric look forward to the chance to get young audiences excited about live theater – especially given how screen-oriented our culture has become. Ellingson worked at Disneyland for four years, and recalls seeing children too engrossed in their devices to focus on the characters, singers and dancers near them.

Contrast that with the time Scherer toured with “Beauty and the Beast.” Little girls showed up dressed as Belle, he says, and children flocked to the cast members afterward to talk about what they’d just seen. Try that with YouTube.

Note: A limited number of $25 seats for each performance will be distributed through pre-show lotteries. To enter, show up at the Atwood Concert Hall lobby two hours before curtain. The drawings take place 90 minutes before show time, at which point winners must show valid ID to purchase up to two tickets.