Review: From screen to stage, ‘Little Mermaid’ expands on a beloved tale 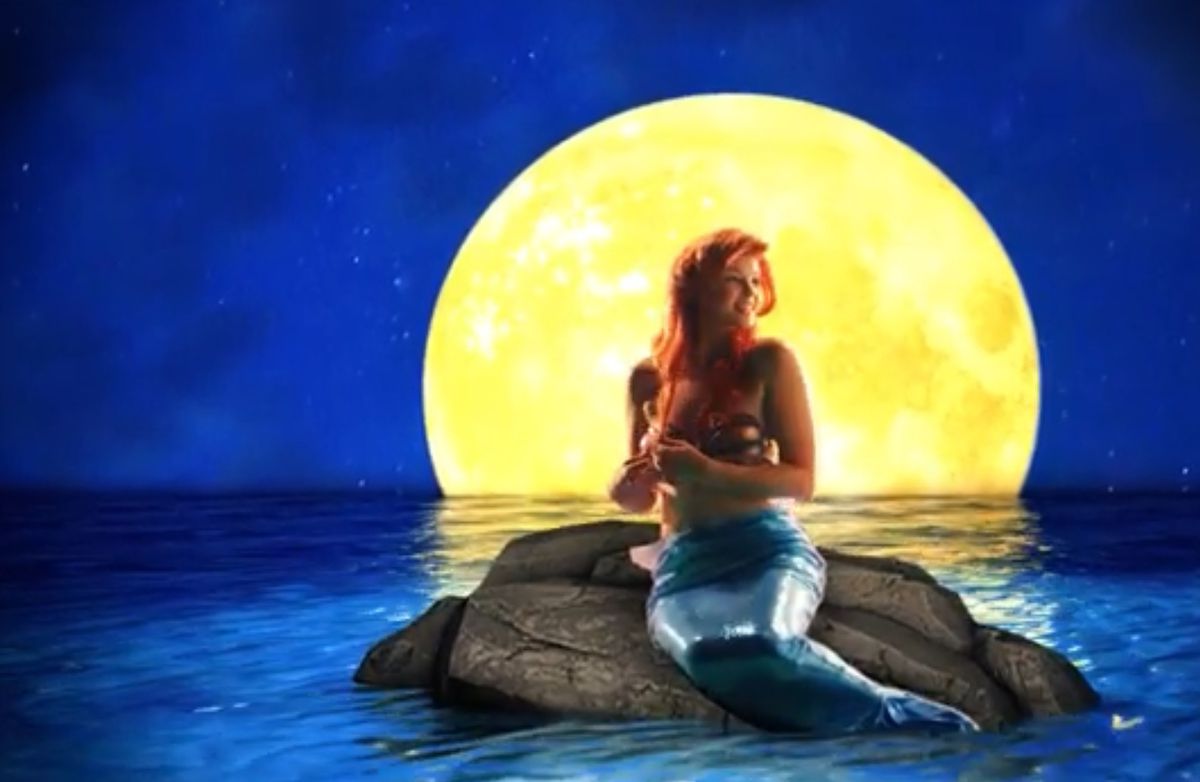 "Disney's The Little Mermaid" continues through Sunday, Oct. 27 at the Alaska Center for the Performing Arts. (Photo via Anchorage Concert Association)

"Disney's The Little Mermaid" continues through Sunday, Oct. 27 at the Alaska Center for the Performing Arts. (Photo via Anchorage Concert Association)

Let’s get this out of the way immediately: “Disney’s The Little Mermaid” is not the movie. That is, it’s not a good match for the small fry. Whenever there’s a funny Caribbean crab or malaprop-prone seagull onstage, younger kids are delighted. Remote-controlled crustaceans, tap-dancing gulls and electric eels on scooters also kept them entertained.

But a two-hour stage musical also contains a lot of talky-talk scenes and songs about boooring stuff like love and revenge and living your best life. If you expect a preschooler to sit quietly through that, you’re asking too much.

Older kids (and adults) should have a great time, though, because “Disney’s The Little Mermaid” is a story that appeals to some of our deepest hopes and fears: the need to be not just loved but also understood and accepted, and the feeling that you don’t belong where you are.

Title mermaid Ariel (Madeline Ellingson) asks an eternal question: “What if home isn’t the place you were born? What if it’s a place you have to discover for yourself?” Anyone who’s ever wondered about life beyond their birthplace can identify with the determined Ariel, whom Ellingson imbues with youth and optimism without a hint of sappiness.

Ariel is no simpering cipher: As a mermaid she questions the status quo and as a human she stands on her own new feet rather than acting helpless and in need of rescue.

Ellingson’s voice at times overwhelmed the space (possibly a microphone issue), but mostly it was big and true. Her signature number, “Part of Your World,” left Tuesday’s audience poleaxed. A few soft utterances of “Whoa” were heard before the applause began.

The evil sea witch, Ursula (Cynthia Ferrer) was also a crowd-pleaser. With her tentacle-y black and purple gown and her huge, growly voice, Ferrer made a deliciously comic villain. But hers was not a one-note character. While singing the creepy “Daddy’s Little Angel,” Ferrer somehow suggested that things might have been different had Ursula not been neglected and shunted aside.

As the crab Sebastian, Eric B. Anthony was by turns a fussbudget worried about his own hide and a concerned friend. When he gently tells Ariel, “Child, it was for your own good,” we believe him. She doesn’t, of course — until later, when it’s almost too late.

There’s growth in the musical. The hunky Prince Eric (Tyler Scherer) wants to be a carefree sailor, but ultimately decides to accept his birthright and be the best king he can. He also holds out for true love rather than marrying dutifully and for advantage.

Ariel grows up, too, learning (almost too late) that choices have consequences — not just for her, but also for the people who love her. King Triton (Christopher Showerman) realizes that his prejudice against humans is wrong and, worse, that his inflexibility has put his beloved child in danger.

Showerman is the least effective actor in the bunch, affecting a stentorian voice and officious manner that come across as parodic. As one viewer noted, it was like watching a teenager trying to play what he thought an adult would be like.

Props go to the rest of the cast, though, especially the hard-working chorus members who play sailors, sea creatures, swans, frogs, Ariel’s sisters, maids, seagulls, footmen, chefs and princesses. Their portrayal of animals was particularly intriguing: gliding in and out of the action on skates or wheeled shoes while wearing fish, frogs or swan heads on their hands. As with Japanese bunraku theater, you quickly learn to see only the animal rather than the puppeteer.

The undersea action is suggested mostly by backdrops, iridescent tinsel, green-blue lighting and undulating projections of water and bubbles. Many characters “swim” on those wheels or skateboards (the sea turtles are particularly fun), but the merfolk mostly do it with a certain shimmy in their walk (their tails do most of the work).

The production is challenged by frequent scene changes. The need to go from Triton’s kingdom to the surface to the castle to Ursula’s lair and back again means the action is choppy at times. There’s really no help for it, as the story is not exactly linear, but it can be tough for younger audience members to understand what’s going on.

And a confused kid is a restless kid. At Tuesday’s show, one not-quite-4-year-old squirmed and yammered and ignored the shushing of his parents; about 20 minutes before the end the child said, said quite audibly, “Wow, this is long.” Another youngster who clearly didn’t want to be present kept kicking the seat in front of him.

Again: Take the money you would have spent on a seat and get a babysitter for any kid under age 5 or so. Otherwise you run the risk of annoying people who paid good money to hear a musical, not your children.