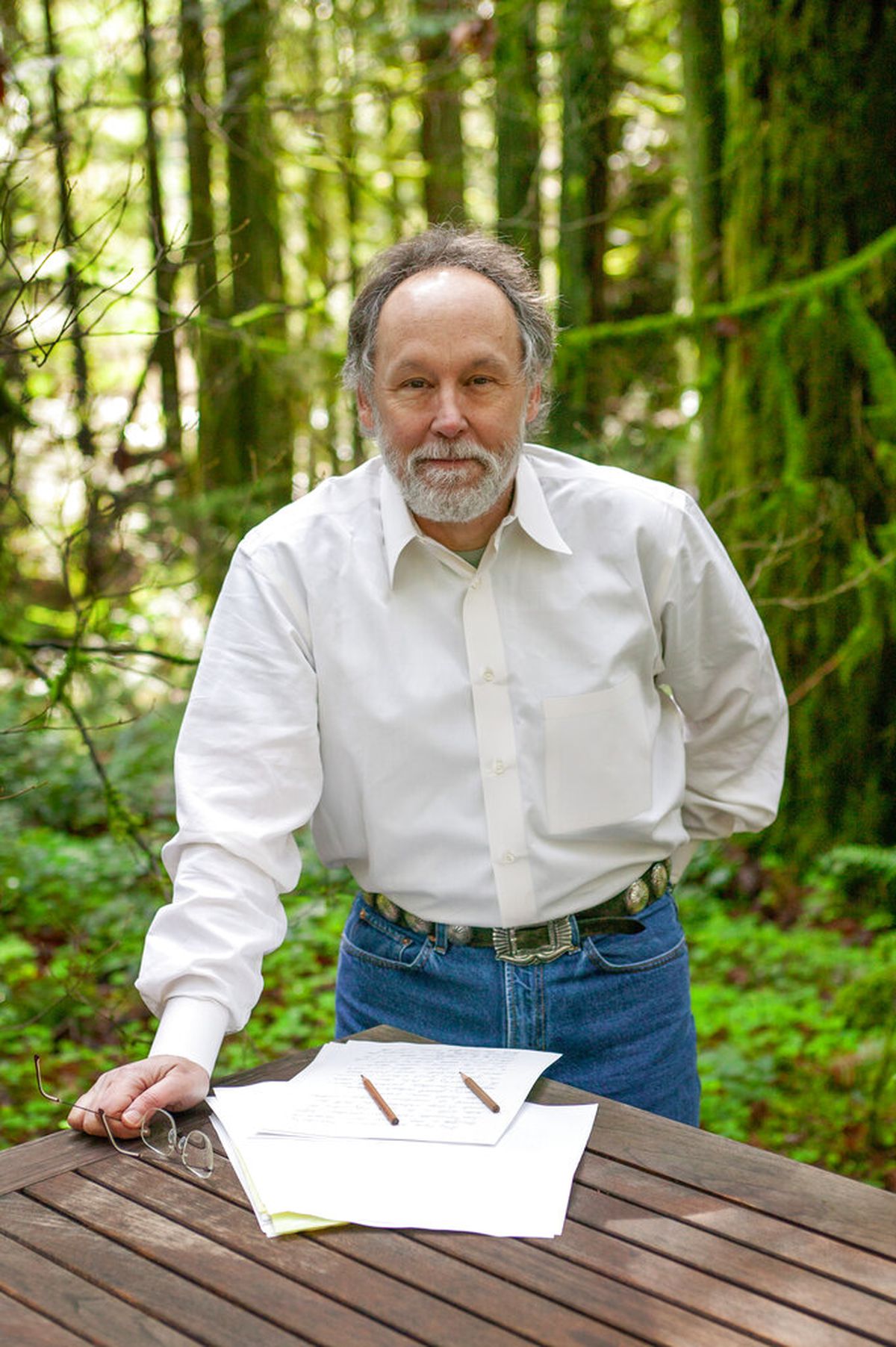 This March 24, 2003 courtesy photo released by Natural History photographer David Liittschwager, shows writer Barry Lopez near Blue River, Oregon. Barry Lopez, an award-winning writer who tried to tighten the bonds between people and place by describing the landscapes he saw in 50 years of travel, has died. He was 75. His family said Lopez died in Eugene, Oregon, on Friday, Dec. 25, 2020, after a years-long struggle with prostate cancer. An author of nearly 20 books on natural history studies, along with an essay and short story collections, Lopez was awarded the National Book Award in 1986 for "Arctic Dreams: Imagination and Desire in a Northern Landscape." It was the result of almost five years of traveling the Arctic. (David Liittschwager via AP)

This March 24, 2003 courtesy photo released by Natural History photographer David Liittschwager, shows writer Barry Lopez near Blue River, Oregon. Barry Lopez, an award-winning writer who tried to tighten the bonds between people and place by describing the landscapes he saw in 50 years of travel, has died. He was 75. His family said Lopez died in Eugene, Oregon, on Friday, Dec. 25, 2020, after a years-long struggle with prostate cancer. An author of nearly 20 books on natural history studies, along with an essay and short story collections, Lopez was awarded the National Book Award in 1986 for "Arctic Dreams: Imagination and Desire in a Northern Landscape." It was the result of almost five years of traveling the Arctic. (David Liittschwager via AP)

Lopez’s most recent book was “Horizon,” a roughly 500-page autobiographical work that reflects on a lifetime of journeys in more than 70 countries. It was the latest in a string of nearly 20 books ranging from natural history studies to essay and short story collections.

“His books are landmarks that define a region, a time, a cause,” said former Oregon Poet Laureate Kim Stafford, a longtime friend. “He also exemplifies a life of devotion to craft and learning, to being humble in the face of wisdom of all kinds.”

Lopez was broadly respected for his deep reportage, his thought-provoking ruminations and his carefully honed writing – descriptors applied to his work included “evocative,” “felicitous,” “lovely,” “magnificent,” “perfectly wrought” and “sinewy.” He received numerous literary prizes, fellowships and other accolades, including a 1986 National Book Award for “Arctic Dreams: Imagination and Desire in a Northern Landscape,” which drew on nearly five years of research and travel in the Arctic.

A single trip could provide fodder for his writing for decades, as with a 1999 stay in Antarctica to assist scientists cataloging meteorites embedded in ice. Looking back in the January 2019 essay “Polar Light,” Lopez wrote of the experience: “This isolation encourages you to think in a different way about what it means to be human, and to consider the long stretch of humanity’s epoch.”

“What Lopez is after,” fellow Oregon author Robin Cody once said, “is nothing less than a fuller synthesis between humanity and place.”

Lopez’s passion for environmental issues took him to the woods along the McKenzie River east of Eugene, where he purchased land and built a home that was his haven for decades, until it was damaged in the September 2020 Holiday Farm fire; in a Nov. 5 Facebook post, he mourned the loss of “25 acres of mature, temperate-zone rain forest.” He and his wife, fellow author Debra Gwartney, relocated to Eugene.

The late Oregon author Brian Doyle called out that home when he wrote of his fellow University of Notre Dame graduate, “When I have dark days, I remember that Barry is at work, in a room in the woods by a crystal river, and hope rises up again in me like a fist clenched against the dark.”

Lopez was still being lauded in his final days, with an induction into the American Academy of Arts and Letters and with the literary organization Sun Valley Writers’ Conference announcing this week that it had awarded him its inaugural Writer in the World Prize, which recognizes and honors a writer whose work expresses a “rare combination of literary talent and moral imagination, helping us to better understand the world and our place in it.”

“On every level, Barry Lopez is the ideal recipient for our first Writer in the World Prize,” said Robin Eidsmo, the conference’s executive director, according to the LitHub website. “A writer full of curiosity and compassion, he has gifted us with words of optimism and of alarm about our planet and our need to protect it and each other.”

Lopez also worked in other fields, including photography, theater and music, where his collaborators included noted composers John Luther Adams, a former Alaskan, and Arvo Part. The film director John Fowles is said to have accepted an invitation from the Portland Arts & Lecture Series in order to meet Lopez.

The author was born Jan. 6, 1945, in Port Chester, New York, to Jack Brennan, a billboard advertising executive, and Mary Holstun, a newspaper columnist. When Lopez was 3, his family moved to southern California’s San Fernando Valley. His parents’ marriage did not last; in 1955, his mother married magazine publisher Adrian Lopez, who moved the family to New York City.

During those growing-up years, Lopez recalled in “Horizon,” he developed a yearning, “… a desire simply to go away. To find what the skyline has cordoned off.” He was influenced in part by the authors he was reading, he said in a November 2019 appearance at the Portland Book Festival: They awoke a need to get away “from the ordinary assumptions and hierarchies in which I had matured,” he said.

Lopez might have had another, grimmer reason for seeking escape. In 2013, he revealed in the essay “Sliver of Sky” that he had been sexually abused by a family friend for four years starting when he was 7.

After graduating from Loyola School in New York City, Lopez attended Notre Dame, where he earned bachelor’s and master’s degrees. In 1968, he and his then-wife, Sandra Landers, moved to Oregon so he could begin work on a master’s degree in folklore and journalism at the University of Oregon; he settled in Finn Rock in 1970.

But after arriving in Oregon, Lopez decided to leave academia. Instead, he wrote in “Horizon,” “I wanted to see and write about landscapes I thought I could have an informing conversation with, and about the compelling otherness of wild animals.”

His books, stories and essays cast his name far and wide. In a 2016 interview in The Alpine Review he recalled being on an archaeological dig in the Canadian Arctic in 1987 when a tour group approached and Lopez learned from the guide that his entire business consisted of taking people to the landscapes described in “Arctic Dreams.”

Lopez’s legacy also includes a collection of his personal papers at Texas Tech University, which in the 1990s decided to start archiving the papers of writers “who cared about the natural world as much as about human communities,” according to the journal Interdisciplinary Studies in Literature and Environment. Lopez was the writer chosen to anchor the Sowell Family Collection in Literature, Community and the Natural World, which now houses the papers of two dozen authors, including several other Pacific Northwest writers.

In 2018, he was named the first American recipient of the University of Texas at Austin’s Dobie Paisano International Residency Prize for writers who have “demonstrated an abiding connection to the natural world.” The prize’s administrator, Michael Adams, told The Oregonian/OregonLive that when potential recipients were considered, Lopez’s name kept rising to the top. “It was Barry that gave me goosebumps when (I) read his work,” Adams said.

“Barry’s writing puts us in a place where learning happens,” Stafford said. “He’s not so much the guru, the teacher, as the guide, the host, to lead us to a place of wonder and resolve.”

Wednesday, Stafford posted a poem titled “For a Dying Friend” to his Instagram account, adding the hashtag #barrylopez. The poem began, “How may times has the same rain / run in the river past the house to find / the sea, the sky, the high springs, and / down again? How many ways has sunlight / lit your hands as you touched moss, / leaf, fur, and stone with a pilgrim’s love?”

Lopez ultimately saw his mission as elevating the human experience. At the 2019 Portland Book Festival, he remarked that the traditional role of the storyteller was to recognize when there was disturbance and to help others get through it. He said of writing: “This is a social act.”

Lopez recently wrote of how Alaska wolf biologist Bob Stephenson influenced his book “Of Wolves and Men” and later writings. Lopez held an honorary doctorate from the University of Alaska.

The Anchorage Daily News contributed to this article.