From Yakutat to Hollywood 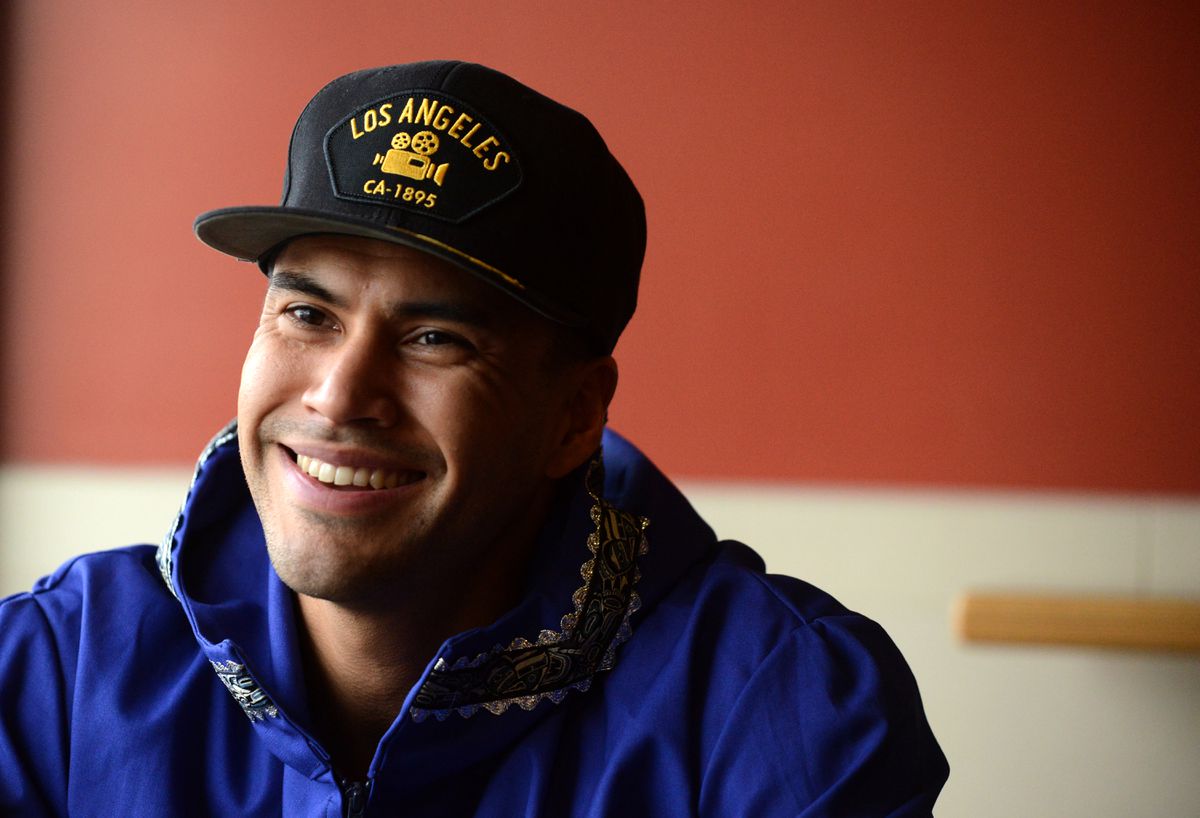 Martin Sensmeier talks about growing up in Yakutat, working on the North Slope and breaking into the movies before the opening of “The Magnificent Seven” at the Regal Cinemas Stadium 16 at the Tikahtnu Commons in Anchorage on Friday. Sensmeier is one of the stars of the movie that opened nationwide on Friday. (Bob Hallinen / Alaska Dispatch News)

Martin Sensmeier talks about growing up in Yakutat, working on the North Slope and breaking into the movies before the opening of “The Magnificent Seven” at the Regal Cinemas Stadium 16 at the Tikahtnu Commons in Anchorage on Friday. Sensmeier is one of the stars of the movie that opened nationwide on Friday. (Bob Hallinen / Alaska Dispatch News)

The latest incarnation of the classic Japanese film "The Seven Samurai" features some ethnic diversity that previous versions lacked. The leader of the seven outcasts who defend a village against impossible odds is black (Denzel Washington). The company includes an Asian (Korean actor Byung-hun Lee). And the six gunslingers are joined by a kick-butt Comanche archer named Red Harvest.

But the actor who plays that role in "The Magnificent Seven," which opened nationally on Friday, is not a Comanche. Martin Sensmeier is an Alaska Native from Yakutat, a fishing town of about 600 without a road in or out.

Just before the 7:40 show on Friday night, he met family members in front of the Regal cinema at Tikahtnu Commons in Muldoon. About 30 were on hand, most of whom had flown in from the village, 366 air miles southeast of Anchorage.

"You look like you're swaggering, son," said Sensmeier's father, Raymond, with a broad grin. And who wouldn't grin to see his kid's name on the poster in front of the box office? And in the same-size letters as the names of big-time stars Washington, Chris Pratt and Ethan Hawke.

Martin Sensmeier was born in Anchorage in 1984, "at the Alaska Native Medical Center," he said. "The old one," on Fourth Avenue. His father is Tlingit and his mother, Eva, is a Koyukon Athabascan from Ruby on the Yukon River. He grew up in Yakutat and first caught the acting bug there.

His other passion was basketball. But in Yakutat, a career in either sports or show business was only a dream.

Instead, he studied welding. By the end of high school, he was making trailers that were sold to fishermen. When he graduated, he came to Anchorage and took welding classes at the University of Alaska Anchorage for two years, working much of the time. When he was 21, he got hired by Doyon Drilling and began a stint of two-weeks-on, two-weeks-off schedules on the North Slope.

It turned out to be five years but it wasn't wasted time. Sensmeier started using his two weeks off to fly to Los Angeles, where he attended acting classes. He made friends in the film industry and attended some festivals. But nothing seemed to be coming of the effort and he finally settled back in Alaska, living in Anchorage, Yakutat and even Barrow for a time.

He picked up some modeling gigs and worked his way onto sets whenever he could. He hosted a television magazine show focused on Native American entertainment, "The Hub." Through that he met Chris Eyre, the director of "Smoke Signals."

"Chris saw something in me," Sensmeier said.

He had been thinking about attending film school and had been accepted to a couple of them. But Eyre told him: "Film school is always going to be here. You should pursue this acting thing. There's a wave coming. Be ready to ride it."

He called up one of his former teachers, Terrance Hines, and said he wanted to go back to acting class.

"He's had thousands of students but he remembered me. He said, 'I'm retired from teaching. I'm only managing now. But is anyone managing you?' "

Hines took the Alaskan under his wing, saying: "I think you can make it in this business. But it's going to take a while."

"I got occasional auditions and eventually got small parts," Sensmeier said. "There was an indie film. I worked hard at it, studied with several different teachers. But I hadn't booked much of anything."

Then came word that an elder in Yakutat had died.

"We're very connected," Sensmeier said. "I'm Eagle of the Teikweidi Bear Clan. He was of the opposite clan. I should have been there. But I couldn't afford to come back. I struggled with that.

"I thought, here I am in L.A., chasing this dream. And for what? Everyone at home is getting older. I'm missing out on hunting, fishing, family, cultural events. If I was at home, I could be a better hunter, fisher, mechanic, teacher.

"I decided, I'm going to give this two more solid years. Then I'll cut my losses. And in the meantime, I'm going to work harder than I've ever worked before."

Shortly afterward, he landed the role in "The Magnificent Seven."

The audition process was grueling. He had to come back several times. He had to show that he could ride a horse Comanche-style, even though he had little experience. Yakutat, Alaska, isn't exactly horse country.

When he got the job, the real work began. He went to Baton Rouge, Louisiana, where the film was to be made, a month before the shooting began and practiced riding bareback for an hour and a half each day. He did a 45-minute cardio workout followed by an hour and 15 minutes of weights and a half-hour of stretches every day, read histories of the Comanche people and took coaching from a Comanche language instructor to speak the lines written for Red Harvest. He watched classic Westerns to get a sense of what director Antoine Fuqua wanted. He analyzed the character and created a back story.

"Antoine gave me an idea and let me put it through my filter. He said, 'I'm not going to tell you how to act Native. You're Native and I'm not.' He's a very smart guy and respectful of the culture. He'd give me suggestions and I'd listen to him, but basically he let me create the character, or work with him in creating the character."

The fictional Red Harvest has some attributes that are also evident in Sensmeier. Red Harvest is a loner, separated from his people. Sensmeier is an Alaska Native driven to a profession that keeps him far from home. As a result, both draw on inner resources to a greater extent than most other people.

"When I'm working, I like to isolate myself, be in my own element," Sensmeier said. "I try to get inside the head of the character."

Both the actor and his character are respectful, earnest and humble, despite their talent and prowess.

"As Natives we have a storytelling tradition," Sensmeier said. "Storytelling in film is my way of honoring my tradition. I take it seriously."

And both embrace the duty to help others. On Monday, Sensmeier will go to Washington, D.C., for a summit of Native youth groups. He's an ambassador for the Boys and Girls Clubs of America and the Native Wellness Institute.

"The youth are our future. The elders say everything we do is going to influence them. I have a platform now and I have a responsibility to use that platform to inspire and influence others."

One of the most moving moments of his life came when he heard Billy Mills speak. The Olympic gold medalist from the Pine Ridge reservation in South Dakota told his audience that many, perhaps most, Native Americans are impoverished, and not just materially.

The message comes from all different parts of a community and society at large but it's particularly crippling when it comes from parents, he said. So he's grateful that Raymond and Eva were not like that.

"There's no such thing as an unrealistic dream," he said. "I don't believe it. I've never believed it. Some people would have said that it couldn't happen. I was a kid in Yakutat. I was a roughneck for five years. And now I'm doing what I've always wanted to do.

"My parents told me I could be anything I wanted. They told me, dream and work hard and you can do it. Even if you don't reach your goal, if you give your all, that's a form of success."