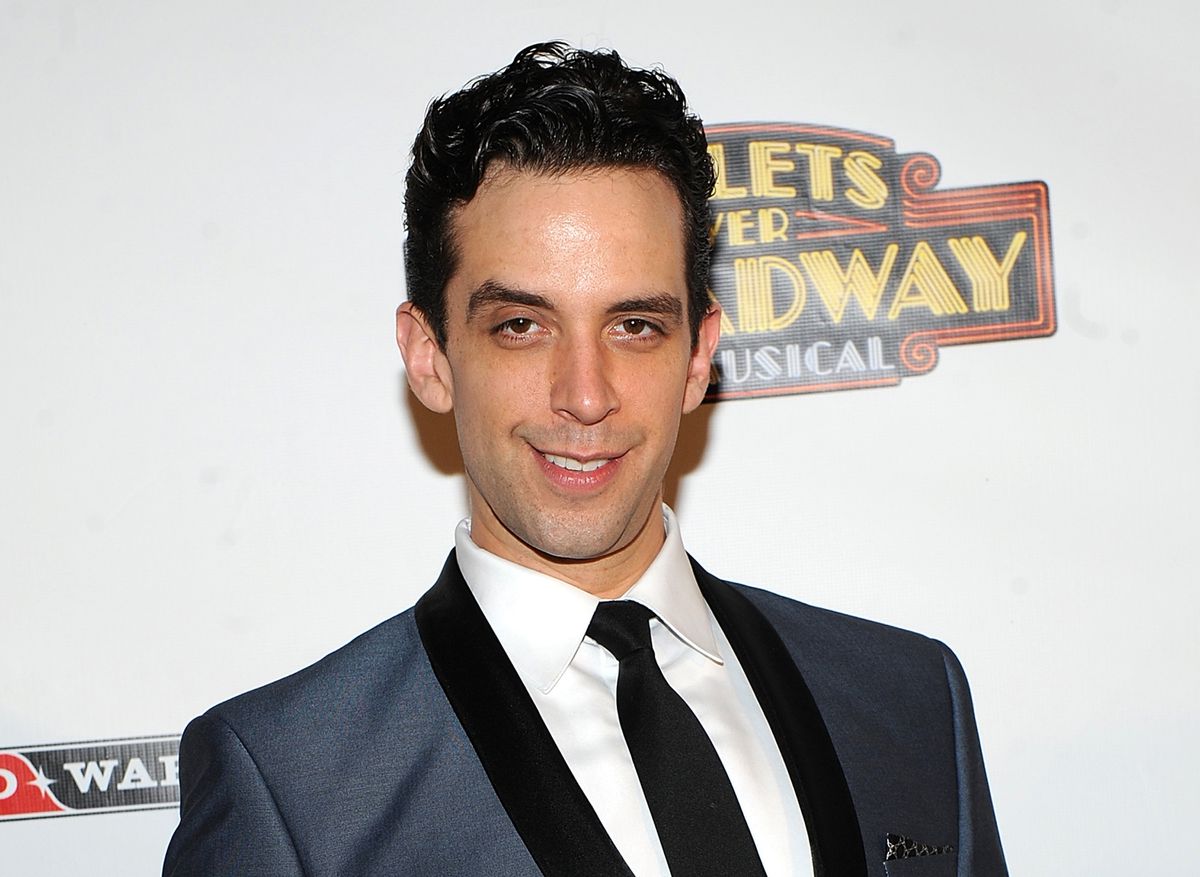 FILE - In this April 10, 2014, file photo, actor Nick Cordero attends the after-party for the opening night of "Bullets Over Broadway" in New York. Tony Award-nominated actor Cordero, who specialized in playing tough guys on Broadway in such shows as “Waitress,” “A Bronx Tale” and “Bullets Over Broadway,” has died in Los Angeles after suffering severe medical complications after contracting the coronavirus. He was 41. Cordero died Sunday, July 5, 2020, at Cedars-Sinai hospital after more than 90 days in the hospital, according to his wife, Amanda Kloots. (Photo by Brad Barket/Invision/AP, File)

FILE - In this April 10, 2014, file photo, actor Nick Cordero attends the after-party for the opening night of "Bullets Over Broadway" in New York. Tony Award-nominated actor Cordero, who specialized in playing tough guys on Broadway in such shows as “Waitress,” “A Bronx Tale” and “Bullets Over Broadway,” has died in Los Angeles after suffering severe medical complications after contracting the coronavirus. He was 41. Cordero died Sunday, July 5, 2020, at Cedars-Sinai hospital after more than 90 days in the hospital, according to his wife, Amanda Kloots. (Photo by Brad Barket/Invision/AP, File)

Nick Cordero, a Canadian actor who earned a Tony nomination for the 2014 musical “Bullets Over Broadway” and seemed on the cusp of an even more prominent career before being hospitalized with the coronavirus, died July 5 at a hospital in Los Angeles. He was 41.

His death was announced on Instagram by his wife, Amanda Kloots. Cordero had been hospitalized in late March and was subsequently diagnosed with covid-19, the disease caused by the novel coronavirus. He reportedly had no underlying health conditions but, after being put on a ventilator, developed blood clots that led doctors to amputate his right leg.

Cordero's wife, a fitness trainer and former Radio City Rockette, had posted regular updates on his health, launching a daily singalong with the hashtag #wakeupnick to show support for Cordero during the six weeks he was in a medically induced coma.

Standing 6-foot-5, with dark hair and a baritone voice, Cordero was a menacing presence on TV shows such as "Lilyhammer," "Law & Order: Special Victims Unit" and the police drama "Blue Bloods." But he was best known for his work on Broadway, playing charismatic brutes in musicals including "Bullets Over Broadway" and "A Bronx Tale" - two shows in which his character was previously portrayed on-screen by Bronx-born actor Chazz Palminteri.

Those roles gave Cordero a chance to take major parts, after years of being passed over in favor of shorter actors who, he once joked, looked "better next to the leading lady." Before he was cast in "Bullets Over Broadway," he had appeared in the off-Broadway musical "The Toxic Avenger" and as a replacement performer in the jukebox hit "Rock of Ages," but was preparing for a fallback career by taking real estate classes.

Adapted from Woody Allen's 1994 black comedy film of the same name, "Bullets Over Broadway" featured Cordero as Cheech, a tap-dancing mob enforcer who dumps rival gangsters into the noxious Gowanus Canal in Brooklyn. "The producer kept telling me, 'Get tough. Get mean. Get angry,' " Cordero told The New York Times in 2014. "But I'm a nice guy. I'm Canadian."

With a score of 1920s standards and an ensemble cast helmed by Zach Braff and Marin Mazzie, the show received six Tony nominations, including best featured actor for Cordero. He ran away with the show, wrote Times theater critic Ben Brantley, but lost to "Aladdin" star James Monroe Iglehart.

"Chazz Palminteri received a deserved Oscar nomination as Cheech, and Mr. Cordero is just as good," Brantley wrote. "It's not that Cheech's lines are any more outrageous than a lot of what the other cast members have to say. But unlike most of those others, Mr. Cordero never pushes for effect, even when he's leading a homicidal dance number to ' 'Tain't Nobody's Biz-ness if I Do.' "

Cordero later starred in the crowd-pleasing musical "Waitress" as Earl, the abusive husband of actress Jessie Mueller's title character. He left the show in September 2016, six months after its opening, to play Sonny in "A Bronx Tale," adapted from a one-man play by Palminteri that had inspired a 1993 film starring and directed by Robert De Niro.

With De Niro co-directing, the show ran for 700 performances, most starring Cordero, who received a Drama Desk Award nomination as a killer whose brutal crime is witnessed by an impressionable boy, Calogero, played - at different ages - by Hudson Loverro and Bobby Conte Thornton.

Nicholas Cordero was born in the steel city of Hamilton, Ontario, on Sept. 17, 1978. His parents were schoolteachers, and his father was a Costa Rican immigrant. Cordero recalled participating in Latin dances as a boy, dancing with older girls ("I thought I was super cool") years before he learned to tap-dance for "Bullets Over Broadway."

"Theater kept me out of trouble," said Cordero, who began performing cabaret at age 14 and later sang on a cruise ship. He studied acting at Ryerson University in Toronto for two years before dropping out to play guitar and sing with his rock band, LoveMethod.

By the early 2000s, he had begun focusing on acting, performing in Canadian stage productions and appearing in an episode of the Showtime series "Queer as Folk" before moving to New York City in 2007.

Soon after arriving, he was cast in a New Jersey production of "The Toxic Avenger," which ran off-Broadway beginning in 2009. Written by Joe DiPietro and Bon Jovi keyboardist David Bryan, the musical was adapted from a schlocky 1984 movie about a geek named Melvin who is thrown into a vat of toxic waste and becomes a slimy green superhero.

As Melvin in the stage adaptation, Cordero played a comically deformed crusader against environmental destruction who tries to save his home state of New Jersey while winning the love of a blind librarian and singing pop-rock songs with titles such as "Hot Toxic Love" and "Thank God She's Blind."

"All of this is carried out in deliciously bad taste that somehow isn't really offensive," Stephen Wells wrote in The Times, reviewing the original production in New Brunswick.

Cordero took on another unusual superhero role in 2015, playing the Avenging Angelo - a villainous character with the special gift of locating empty parking spots - in the off-Broadway musical "Brooklynite."

In 2017 he married Kloots, who had danced in "Bullets Over Broadway." They had a son, Elvis, born in 2019, and recently moved to Los Angeles, where Cordero starred as the Hollywood nightclub owner Dennis in a new production of "Rock of Ages."

Complete information on survivors was not immediately available.

Even Cordero seemed taken aback by the timing and success of his breakout role in "Bullets Over Broadway." Had he not been cast, he said, he would probably be working in real estate somewhere.

“I guess I was always hoping for a moment like this, but I kept wondering if it was ever going to happen,” he told the Toronto Star after receiving a Tony nomination. “But now that it’s come along,” he added, “it seems like a validation of my whole career, everything I worked for and struggled for all these years.”