For first time since grunge was huge, '90s punk rock stars The Offspring return to Alaska 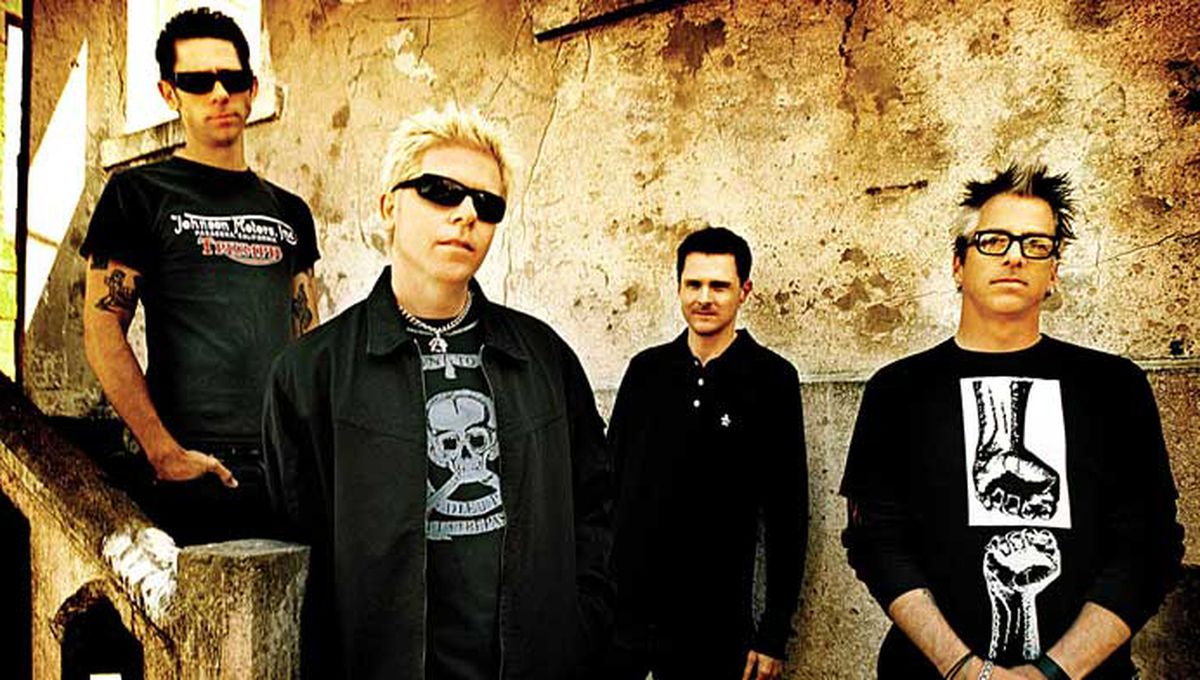 The Offspring will play Saturday, Oct. 29, at the Alaska Airlines Center in Anchorage.

The Offspring will play Saturday, Oct. 29, at the Alaska Airlines Center in Anchorage.

It'd be nearly impossible for The Offspring guitarist Kevin Wasserman to forget his first trip to Alaska.

The trip coincided with the biggest achievement in the band's career, as well as one of the most tragic events in recent rock history.

The gig, playing the King of the Hill snowboard competition in Valdez, was April 8, 1994, the day the band's album "Smash" — which produced the hit singles "Come Out and Play," "Self Esteem" and "Gotta Get Away" — was released. Living up to its billing, the album was the group's greatest triumph and marked a turning point in their career.

It was also the day legendary Nirvana frontman Kurt Cobain was found dead in his home in Seattle.

"It was crazy, it was really nuts," said Wasserman, who goes by the stage name Noodles. "(The trip) was so much fun. The weather was good. It was in April, and I got to snowboard for the first time. We were up there for three to four days just hanging out and drinking. It was a blast."

"Smash" went platinum six times over, producing massive hits for a band that had already spent nearly a decade grinding it out on the California punk rock scene.

And while Nirvana was closely associated with the grunge scene in the Pacific Northwest in the early 1990s, they were really closer relatives to the fiery punk favored by The Offspring.

Noodles credits Nirvana for creating an opportunity for The Offspring and others of their ilk to reach larger audiences.

"They changed the music industry," Noodles said. "Everything was overproduced and overdramatized. Nirvana just said 'We're three guys. This is who we are. We don't always have time to shave and shower and we love making music that's real and raw.' And that's what rock 'n' roll was all about. Nirvana took off and blew the doors off and changed everything."

Dexter Holland and Greg Kriesel decided to start a band in 1984 after watching a Social Distortion show in Garden Grove, California. By 1986, the duo had added Noodles and James Lilja on drums.

The group started out making connections through punk zines like Flipside and touring on the scene in California and beyond.

"You'd go through these magazines and climb in a van or a pickup truck," Noodles said. "You sort of had pen pals across the country and setting up tours across the country. It was really our hobby. We didn't expect it to be more than our hobby. We loved going out and playing punk rock and making music with and for a bunch of knuckleheads like us."

By the early '90s, the band had developed a fairly rabid following on the punk scene, signing with Epitaph Records alongside bands like Rancid and Pennywise, which co-headlined the Valdez show in 1994.

The 1992 release of "Ignition" gave The Offspring something on par with the releases from their label mates.

"We wanted to do something as good as they'd done," Noodles said.

With the release of "Smash" in 1994, The Offspring started producing massive hits, while proudly sticking to their punk roots. "Come Out And Play" and "Self Esteem" helped The Offspring set a record for most sales from an independent release.

"We made 'Smash' on a shoestring budget," Noodles said. "We had to call in and if nobody was using the studio, we'd get it for half price."

As is standard when punk bands hit it big, there was some backlash, but Noodles said it was from "neophyte punkers," not among longtime fans.

"We did get a lot of s— for that, but it wasn't from our fans," he said. "Our fans were stoked. They saw we weren't doing anything different. It wasn't just for them anymore. It was for everybody."

In a time where Guns N' Roses was spending "millions of dollars" on videos, Noodles said "we went into somebody's backyard and shot ours for $10,000 and most of that was on beer and food."

"I'd like to say it didn't get to our heads too much but I'm sure it did," he said. "At the same time, we knew how we were as a band and how we worked together. We realized it wasn't us that changed. It wasn't any better or worse than we were before. The world we live in has been altered. That kept us keeping our heads down and our feet on the ground."

The band is working on a new album, set to be released in early 2017 with a half dozen songs ready for recording.

"We're still planning on getting in the studio soon," Noodles said. "We might still have a video. It'll be interesting to see what happens."