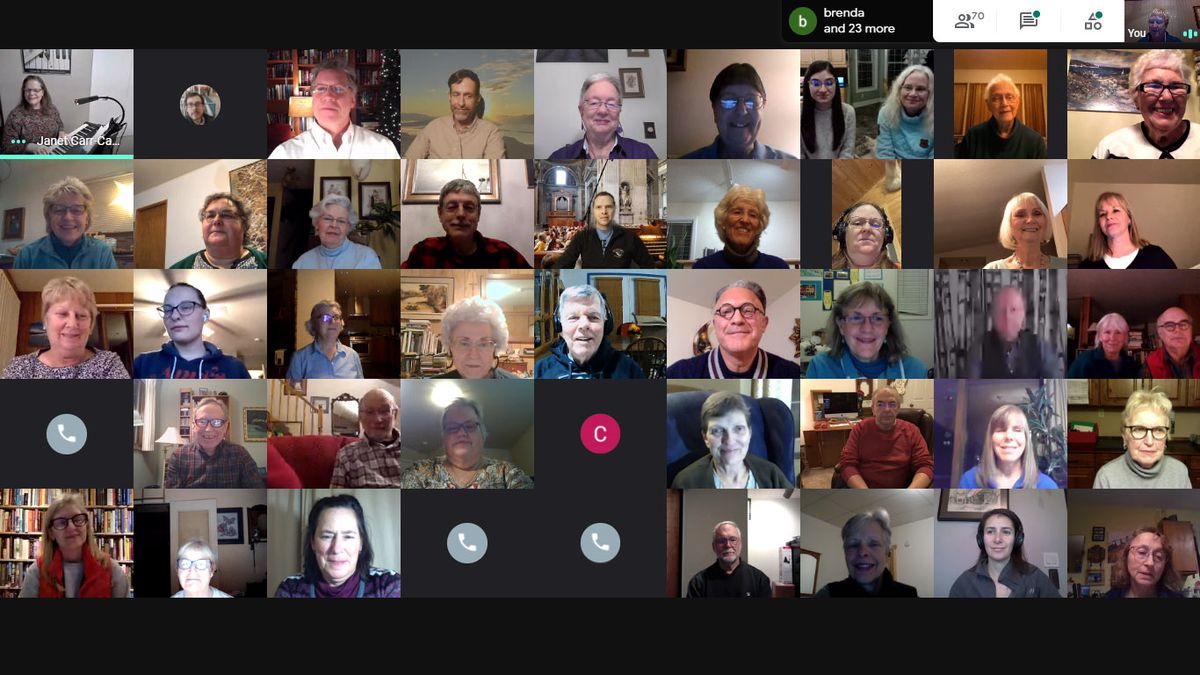 The Anchorage Concert Chorus gathers virtually on Monday, Nov. 23, 2020. There were 71 people on the GoogleMeet call, but only 45 show on a screen at a time. (Screenshot by Becky Oberrecht)

The Anchorage Concert Chorus gathers virtually on Monday, Nov. 23, 2020. There were 71 people on the GoogleMeet call, but only 45 show on a screen at a time. (Screenshot by Becky Oberrecht)

For roughly the last 60 years, Brenda Davis has looked forward to Monday night.

That’s when Davis joins a group of roughly 150 singers in rehearsal for the Anchorage Concert Chorus. Davis loves to sing, but that isn’t what’s kept her coming back year after year. It’s the friendships and connections she’s made.

“I’ve met so many lifelong friends in the chorus,” she said. “And I’ve often told people that I don’t know where I would be on a Monday night if it wasn’t for the chorus.”

But since the pandemic began here in March, those friends are now small squares on her computer screen during virtual practices.

“I’m going to the virtual rehearsals, but I don’t find it very rewarding,” she said. “My big thing with choruses is the social aspect — being with people and singing with people.”

The loss of in-person interactions has hit many in the chorus community hard, said Grant Cochran, who conducts the Anchorage Concert Chorus and the choir at the University of Alaska Anchorage.

And nothing makes that more apparent than the holiday season, when music and tradition are closely intertwined. Normally at this time of year, Anchorage Concert Chorus members would be preparing for their holiday pops show, performing at the city’s annual Christmas tree lighting ceremony and getting ready to help with Anchorage’s 74th annual community “Messiah.”

“If the community is going to be missing us at all this year, it will be during the holiday season,” Cochran said.

Of the performing arts, singing in particular has been drastically impacted by the pandemic because it can easily transform into a superspreader event. In March, a Washington state choir made national headlines when a socially distanced rehearsal led to a COVID-19 outbreak among members. Two died.

Cochran said that news shook the choral community worldwide. He canceled all performances and in-person rehearsals. It was clear to him that singing could not be safely done in person and many members of the group are older, which puts them at a higher risk for becoming seriously ill from COVID-19, he said.

“We’ll definitely feel a real absence,” he said. “Maybe like a family member who can’t come home for Christmas — a daughter who lives out of state and won’t be able to come home this year — It’ll feel like that. You know, just this big hole in your life.”

Stephen McLallen, managing director of the Anchorage Concert Chorus,, said it’s been important to maintain the group’s routine and provide some sort of normalcy, even if it means rehearsals are now being done online.

“The big push for us was to just keep our community together and to keep people in contact,” McLallen said. “This group has been around for over 50 years and they’ve been meeting every Monday to rehearse for forever. As soon as they lost that, that was a really big blow, especially to a lot of our older and more isolated members.”

Benton said the switch to digital has been a challenge, which is evident by declining participation in rehearsals. Up to a third of the group’s 70 members do not regularly attend rehearsals now.

“It’s hard because I have some members that work full time and they’re Zooming all day long, so you really have to make it interesting for them to want to log on on a Tuesday night for two hours,” Benton said.

Cochran said he’s lost members for the time being, also. Many older members had challenges figuring out the technology or found they just didn’t enjoy the digital rehearsals.

The Anchorage Concert Chorus is preparing an online version of their holiday pops concert now, Cochran said. It’s not the same, but it still helps carry on tradition.

Singers are recording themselves performing at home and McLallen will edit together the clips to play simultaneously, as if they were all singing together. The final product will be posted on YouTube.

Cochran hopes the performance will bring people joy. While traditions will look different this year, he hopes people will take this time to create music with their families.

As for Benton, she said she keeps reminding herself that someday, things will go back to normal. And when they do, the songs will seem even louder, and the voices all that more vibrant.

“The arts give us that depth and colors and choices and angles and connection to the community and ourselves, and it’s one dimensional now. ... We will get on the other side of this, because I want that full dimension life, and the arts can give that to me, and to the community,” she said.

Tuesday, Dec. 22: The Anchorage Concert Chorus will present a virtual holiday pops performance. Look for more information at anchorageconcertchorus.org or check out their channel on YouTube.