Why is K-pop so popular? 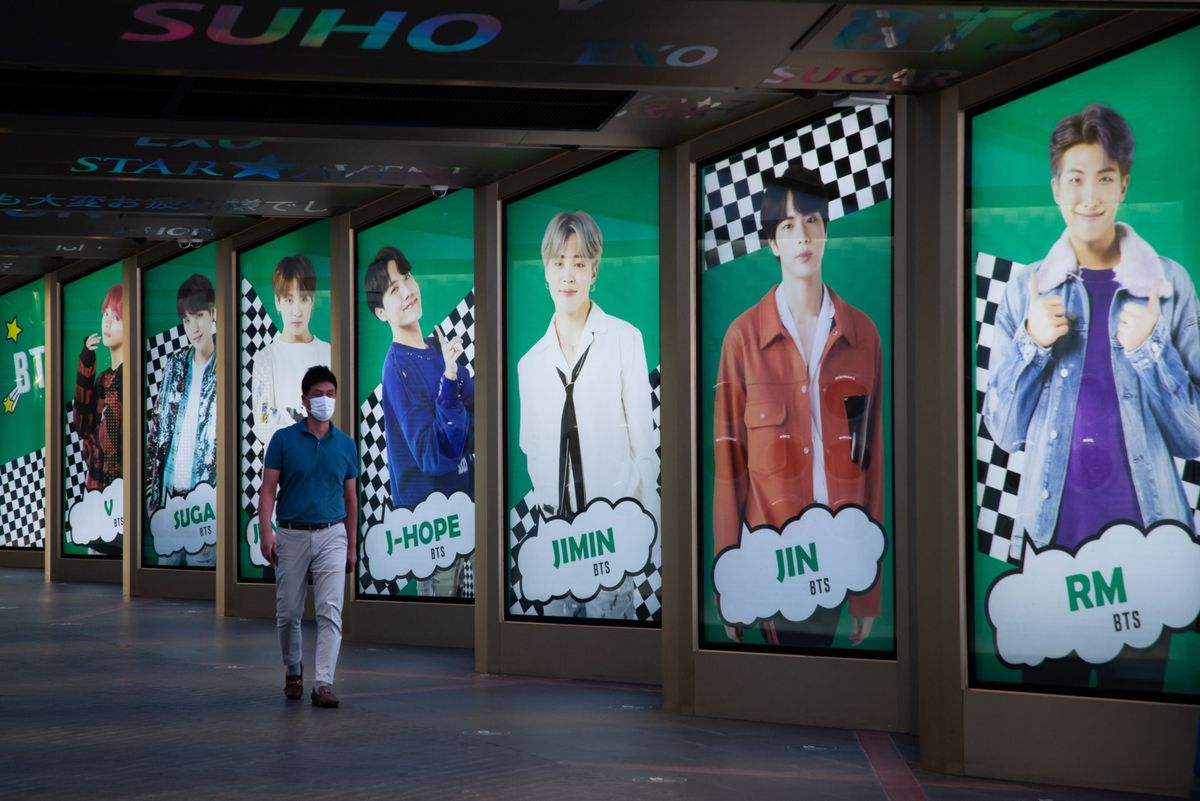 The main ingredient - a catchy hook song - gets paired with a signature dance move and is wrapped up in a flashy video. The entire package is optimized for social media, where a devoted fan base gives the song a life of its own.

Many K-pop songs follow a classic song-writing style: an intro and a verse with hooks in the chorus. These “hook songs” emphasize catchiness through devices like repetition, said Dal Yong Jin, a professor at Simon Fraser University.

Put more simply: “There’s always like this catchy part,” fan Jason Nguyen said. “You just can’t get it out of your head.”

One song that exemplifies this pattern is “Tell Me” by the group Wonder Girls, which topped Korean music charts when it was released in 2007. The repetitive lyrics and upbeat tempo make for an incredibly catchy hook.

“The hook song has become one of the most popular types in K-pop,” Jin said, adding that K-pop stars, or idols, have focused on this type of music because it’s easy to memorize and easy to dance to.

Another popular song, “Sorry, Sorry” by Super Junior from 2009, similarly repeats both English and Korean phrases, making it easy to sing along to, even if you don’t know the language.

Music videos on YouTube also helped K-pop appeal to fans globally. Nguyen was only 8 when he first saw the music video for “Gee” and he was instantly hooked. Memes weren’t a concept yet, but the video is full of them - it sets Girls’ Generation’s infectious bubble-gum pop against a fantasy story line of mannequins coming to life.

Nguyen, who now co-directs a K-pop dance troupe at the University of Washington, said the video’s synchronized dancing, colorful outfits and intricate sets pulled him in. “You don’t really see that with American pop music.”

The visual appeal of K-pop videos is universal. Choreography in particular can transcend cultural barriers, which is why most K-pop videos contain a signature dance move. Like the crab dance in “Gee” or the “Up & Down” dance from EXID, these moves - called point dances - are intentionally easy to imitate.

Lia Kim, a choreographer who has worked with groups like Girls’ Generation and Wonder Girls, said labels will specifically request choreography that is memorable and easy to follow.

The universal nature of point dances also makes them easy for fans to share as dance challenges on social media. Their explosion on Twitter and TikTok, and even in the game “Fortnite,” has helped further expand K-pop’s global reach. In fact, the preview video for BTS’s newest single, “Permission to Dance,” was framed as a dance challenge with sign language for “dance.”

“Trendy dances are what makes K-pop, K-pop,” said choreographer Sienna Lalau, who has worked with BTS, Jennifer Lopez and Missy Elliott, “because it reminds us that in some ways, the movement is as important as the music in today’s ‘content is king’ era.”

K-pop labels have found innovative ways to promote their content globally. One of their marketing strategies is to give up copyrights and release songs and albums to stream on YouTube at the same time they become available for purchase, Jin said.

Of the 10 music videos with the most views in their first 24 hours, nine are songs by the K-pop groups Blackpink and BTS, as of July 13. The only non-K-pop song is Taylor Swift’s “ME!” at No. 8.

Other Asian pop styles, such as Japanese pop, have tried to cross over into global markets, but as Jin pointed out, K-pop succeeded because of its timing with technology. Today, roughly 90 percent of views for K-pop videos on YouTube come from outside of South Korea.

One of the first K-pop songs to break through in the United States was Psy’s “Gangnam Style” in 2012. Musically, it followed a similar formula as earlier songs with its catchy lyrics, signature dance moves and delightfully ridiculous video. But its success included one other key ingredient: social media.

“That video that was just this kind of early look at like how to create a virality on YouTube,” said YouTube music trends manager Kevin Meenan, who described the video as “snowballing” through the platform.

“Gangnam Style” became the first video to surpass 1 billion views on YouTube and is still the fifth most-viewed music video on the platform. Offline, the song hit No. 2 on the Billboard Hot 100 chart, making Psy the second K-pop artist to rank (Wonder Girls was the first at No. 76 in 2008). Psy even became part of the American cultural zeitgeist by performing in Times Square on New Year’s Eve.

Gangnam Style’s success was fueled in part by celebrities like T-Pain and Britney Spears sharing the YouTube video on Twitter, which generated thousands of retweets each.

“The 2012 global popularity of ‘Gangnam Style’ was triggered by exposure through two large platforms: YouTube and Twitter,” said YeonJeong Kim, the head of global K-pop and Korean content partnerships at Twitter. “Before Psy ... it was a very difficult process for K-pop artists to enter the U.S.”

The 2010s marked the beginning of mutual growth for K-pop and Twitter. Today, the #KpopTwitter fan community is the largest shared-interest group on the platform.

In 2020 alone, there were nearly 6.7 billion K-pop-related tweets globally. To put that in perspective, in the first six months of the coronavirus pandemic, there were 28 percent more tweets about K-pop than covid-19.

And the interest is growing. This year, Twitter users posted an additional 1.4 billion tweets about K-pop, an increase of 23 percent over 2020.

“Twitter has been called the ‘holy place of K-pop,’ " Kim said, not only because of the way artists engage with their fans, but also the way fans interact with each other.

BTS, the first K-pop act to be nominated for a Grammy, has had a huge impact on K-pop’s growth on Twitter, Kim said. The group started tweeting before their official debut and used the platform to have close conversations with fans. This approach was groundbreaking in 2012 but has now become a formula for success for new idols.

“Artists like The Boyz, Stray Kids, Ateez, Tomorrow x Together ... are advancing to the global stages faster than the previous generations,” Kim said, adding that digital platforms like Twitter play a significant role in growing new fandoms.

As fans use social media to glimpse into the personal lives of K-pop stars, they feel more connected - and loyal - to these artists, which further drives engagement.

Fans will coordinate the use of specific hashtags - a tactic called a “total attack” - to support artists and spread fandom culture. Through these “attacks,” they publicize information about everything from streaming a video on YouTube to voting participation and award celebrations.

“K-pop fans are one of the biggest, most organized, fastest groups on the internet,” said David Kim, who runs a YouTube channel analyzing K-pop’s influence. “When they have a common goal to achieve ... they concentrate their firepower until they reach the goal.”

In May, fans used this firepower to promote BTS’s latest hit, “Butter.” The single got more than 108 million views on YouTube in the first 24 hours, driven in large part by conversation about it on Twitter. According to YeonJeong Kim at Twitter, fans tweeted about the single more than 31 million times on launch day.

The song, which is entirely in English, quickly climbed to No. 1 on Billboard’s Hot 100 and Global 200 charts, marking BTS’s fourth No. 1 hit in nine months and establishing the septet on the same international plane as artists like the Beatles, Jackson 5 and Justin Timberlake.

But the power of K-pop fans now extends beyond the music industry, as many use their vast network to support digital activism.

After George Floyd’s murder, various fandoms came together to help. Blackpink fans, for example, organized to promote #BlackLivesMatter instead of #SourCandy, the group’s new release with Lady Gaga.

Around the same time, BTS’s fandom - known as ARMY - raised more than $1 million for organizations like Black Lives Matter and the NAACP. Fans coordinated this effort using the hashtag #MatchAMillion, with the aim of matching the money that BTS themselves donated to the cause.

“ARMY had immediately mobilized like many people around the world,” said Erika Overton, from the BTS fan collective that coordinated the campaign. “It has become a fandom culture to participate in charity because we’re aware that we have the potential to make an impact.”

Lady Gaga may have her Little Monsters, Justin Bieber his Beliebers and Megan Thee Stallion her Hotties, but K-pop fans are in another league.

“The fans for K-pop are unlike anything I’ve seen in my life,” said K-pop choreographer Kyle Hanagami, who has also worked with artists like Justin Beiber, NSYNC and Britney Spears. “They find each other from across the globe.”

Most groups’ fandoms have physical identifiers - colors, names, glowsticks and chants - and an incredible amount of influence and buying power.

In elementary school, Areum Jeong’s very first concert was Seo Taiji and Boys, the group that arguably started the K-pop fandom phenomenon after fans protested the censorship of their 1996 song “Regret of the Times.”

As she got older, Jeong was part of Yellowkies, the fandom for the group Sechskies, which was part of the first generation of K-pop in the 1990s. Jeong, who is now an assistant professor at the Sichuan University-Pittsburgh Institute, has been collecting the group’s merchandise and attending shows for more than two decades.

Early K-pop fandoms had a top-down relationship, Jeong said, with K-pop labels facilitating interactions by running fan clubs and events. But over time, fandoms have evolved to become more horizontal and reciprocal, with fans coordinating their own clubs and promotions.

“It is becoming increasingly difficult to discuss K-pop in isolation from its fandom,” she added, “because an idol cannot become popular without fans’ labor.”

Fans of the first generation of K-pop stars laid the groundwork for organizing together and utilized search engines to create individual fan pages.

Third-generation fans of groups like EXO, Red Velvet, BTS and Blackpink are actively involved with how the groups are portrayed in the digital space, going so far as to reorganize search keywords and keep track of negative comments. Fancams, or fan videos of live concerts or their favorite groups, are also used to create community online.

This evolution has led to powerful K-pop fandoms that transcend the music industry.

“The power you have on social media is basically power in the real world,” said YouTuber David Kim, “which is why K-pop fandoms definitely have the ability to access buying and political power.”

There is no better example of this than BTS fans. Industry insiders say they will buy everything the group touches, from cars and makeup to Barbie dolls and fast food.

The group’s recent chicken nugget collaboration with McDonald’s was so popular that some used paper bags with the BTS logo are selling for thousands, with one bid as high as $20,000, on eBay.

“BTS is ... the definition of a global phenomenon,” said Jennifer Healan, vice president of U.S. marketing, brand content and engagement for McDonald’s. “They have a hugely passionate and loyal fan base - many of whom are our customers and crew.”

While K-pop’s success is driven by a variety of factors, Twitter’s YeonJeong Kim says it’s the fans that set the genre apart. “(K-pop has a) dedicated, organized and smart fandom culture that is particularly difficult to find in other types of content,” she said.

For many fans, it’s not just about the music, but the sense of community. Jackie Alvarez, the chief financial officer of the US BTS ARMY, agrees.

“It feels like one ginormous family,” said Alvarez about the BTS fandom. “We can ... give back to them what they’re giving back to us.”