Is Anchorage real estate slowing or returning to normal? The answer might be both.

In Anchorage, selling more expensive homes is getting harder.

More listings, slower sales and flat prices in Alaska's largest city are apparent across the housing market this summer, but it's the upper reaches of the market, above the $750,000 mark, that are most sluggish.

Thomas sees a wide-open window for those with above-average financial means who are on the hunt for a more expansive layout.

There are "good opportunities for local residents to upgrade if they are in stable economic circumstances," he said.

The expansion of choices at better prices is the silver lining to a market that is reverting to what realtors are describing as more balanced.

The number of active single-family home listings in Anchorage as of June stood at 1,026, up 38 percent from June 2015, according to data provided by Thomas from the Multiple Listing Service. The tail end of the last recession, in October 2011, was the last time home listings broke the 1,000 mark.

Closings recorded by MLS totaled 1,268 for the first six months of 2016, a 7 percent drop from the first half of 2015. The year-to-date average sales price of $365,811 for a single-family home, while just barely lower than last year, is nonetheless significant for breaking a four-year trend during which the average sales price increased by 3.3 percent each year.

Thomas described the data as "a tale of two markets." While buyers hold the advantage at the upper end, the market favors neither buyers nor sellers at the lower to upper-middle price ranges, below $500,000, as an inventory shortage has eased, according to Naomi Louvier, owner and chief executive officer of Jack White Real Estate.

"Compared with last year, we're not seeing as many bidding wars," she said. "To compete against the other listings, you have to do more preparation. You might have to stage your home." 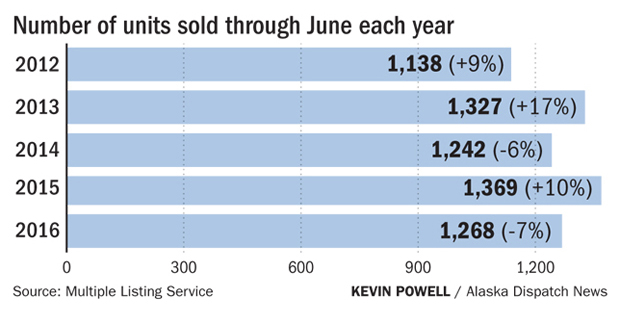 Louvier said her company had projected a bigger slowdown for this period, given widespread fears about how the state would handle it's $4 billion deficit.

"It's a very healthy market. It really is. It's holding strong," she said.

Mortgage rates, another key factor in the home-buying calculus, are still low, which is good news for buyers.

Meanwhile, home foreclosures are at their lowest point in a decade, according to Karinne Wiebold, an economist with the state Department of Labor and Workforce Development.

What should newcomers know about Alaska? Here’s what a 1956 pocket guide from the military says.