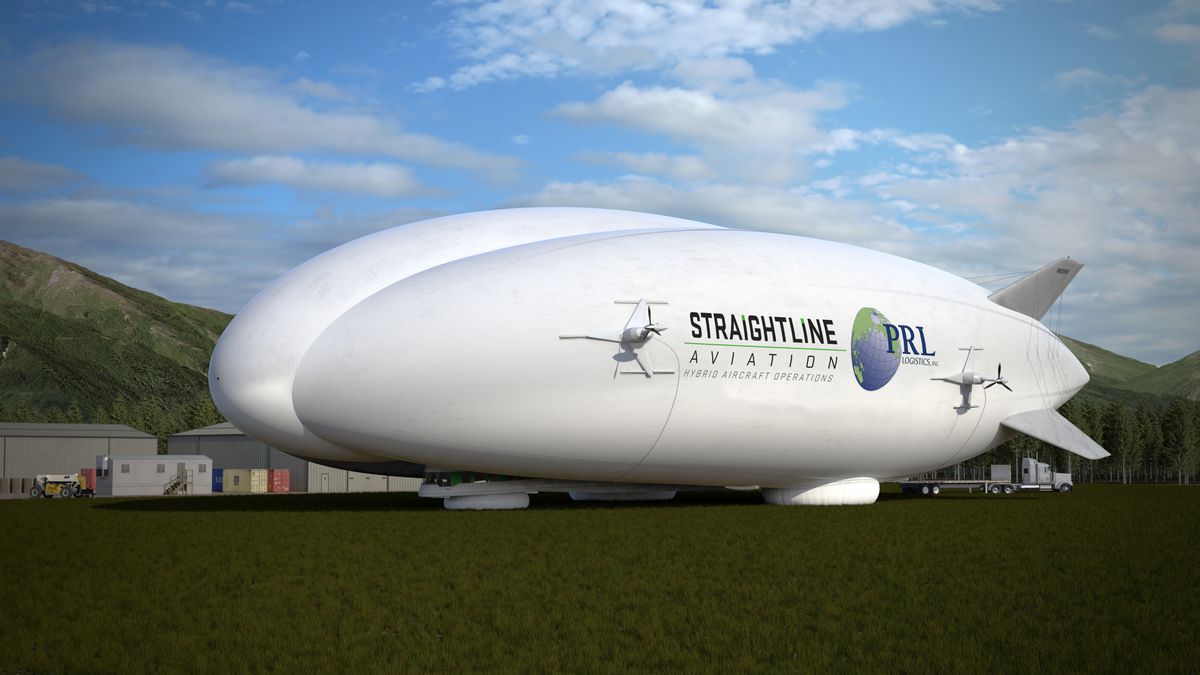 Alaska could be the home of the world's first modern cargo airship once the aircraft rolls off Lockheed Martin's assembly line in 2019, officials said last week.

The deal involves an Anchorage logistics company that hopes to use the helium-filled airship to haul freight and workers to remote sites, officials said last week.

The owner of PRL Logistics said the blimp-like airship will safely support remote Alaska resource projects, including some that might not be developed without the airship, while also giving emergency personnel another tool to rescue people in hard-to-reach areas.

PRL has become a partner with Straightline Aviation, a British company consisting of executives who once ran the Virgin Airship and Balloon Co., formerly owned by billionaire Richard Branson.

Several companies are racing to develop airships they hope will transform air travel. But the Straightline team was most impressed with the plans and prototype developed by Lockheed's Skunk Works team, based in Palmdale, California. Skunk Works also designed the U-2 spy plane and the F-22 Raptor fighter jets stationed at Joint Base Elmendorf-Richardson.

In March, Straightline became the first company to buy Lockheed's LMH-1, ordering 12 of the airships for $480 million.

Hyde said the first cargo airship Lockheed produces will be housed at his company's facility at the mouth of the Kenai River. Later airships will be deployed elsewhere, such as in Canada or in Africa.

PRL Logistics will provide the ground support, such as loading and offloading freight, in Alaska and other places, Hyde said. Straightline will operate the craft.

"We don't want to oversell it and say it can do everything and anything," Hyde said. "Like any transportation asset, it will have limitations and those will become more known. But from an engineering perspective and everything we've been able to assess, we think this is a dependable and reliable option to move cargo and people."

The airship in Alaska will likely conjure up comparisons to beluga whales, with its long, white and puffy body. It will crawl across the sky against traditional aircraft standards, moving about 65 mph compared to speeds by commercial jets of more than 500 mph. Helium will provide 80 percent of the lift, with help from four engines with adjustable thrust.

It will be bigger than a 747 airplane at 285 feet long, and capable of carrying 22-ton loads, comparable to a C-130 Hercules military cargo plane.

The ship uses hovercraft engines to cushion landings and allow near-vertical takeoff. It can land on isolated clearings — snowfields, ponds and frozen lakes — potentially saving money at mines, drill sites and other projects by eliminating the need for runways used by traditional cargo planes, said Hyde.

"It can land on water and pull up to the beach, so it will be world's largest floatplane for sure," Hyde said.

It can carry 18 passengers in addition to its big payload, and could also have advantages over freight helicopters that can access rugged spots but require multiple flights at great expense.

"You can put 10 helicopter loads in the airship and do one trip," Hyde said.

Chris Hladick, Alaska's commissioner of economic development, called the aircraft "amazing." He immediately sees its environmental benefits, including reducing the heavy barge traffic that will be needed on the Kuskokwim River for the proposed Donlin Creek mine 275 miles west of Anchorage, if the mine is built.

But Hladick said there are key questions, such as how the airship will perform in Alaska weather that can go bad quickly, and whether it will reduce costs enough to win contracts.

"Are we talking 30 percent off the price, 25 percent? And how will it handle the wind?" he asked.

Hyde acknowledged the airship will have weather limitations, perhaps more than traditional aircraft. But he asserted it will save money in the long run on some projects by extending shipping seasons and allowing year-round access to areas that were previously too difficult to reach.

"It's showing to be in some cases 90 percent cheaper than traditional methods," with the savings largely related to the elimination of infrastructure, such as roads and runways, that often must be built to support projects, he said.

Hyde said safety and protecting the environment will come first.

Hyde, 55, grew up in the Southwest Alaska village of Goodnews Bay with a bush pilot for a father. After serving the village as a safety officer, he became police chief in the 1980s.

Hyde also worked at the family guiding business in Goodnews Bay, organizing camps for hunters and sightseers. He later joined Jacobs Engineering in Anchorage where he supplied and organized remote camps associated with the cleanup of former defense sites. He realized there was a niche for a logistics company that could allow firms to focus on project technology instead of camp needs.

"It was, 'Let me take the Alaska factor out of your problem,'"  he said of his decision to create PRL Logistics.

In recent years, PRL Logistics has organized the movement of cargo, people and fuel for ExxonMobil's $4 billion Point Thomson field that began light-oil production in April, he said. Hyde said the airship could have saved money on that project by reducing the need for costly ice roads built each winter.

PRL's flawless safety record on that project in 2015 earned the company the Alaska Oil and Gas Association's Contractor of the Year Award for safety in May, after the company moved vast amounts of cargo and personnel to the remote field.

Mike Kendrick, Straightline's co-founder and CEO, said in a phone interview from London that Hyde and his company were recommended very highly by a prominent oil company, but he would not say which one. ExxonMobil declined to comment.

"It was the right fit," Kendrick said of PRL and Straightline.

Kendrick said Straightline is purchasing the LMH-1 airship because Skunk Works developed a key innovation — the air-cushioned landing system can be reversed to use light suction to stabilize the ship on the ground. The feature eliminates the need for a mooring tower that tethers airships by their bow, a system that causes the ships to move in the wind like a weather vane, making it difficult to offload passengers or cargo, he said.

"That's the game-changing technology we were waiting for," he said.

Kendrick said the Virgin airship company once owned the largest fleet of airships in the world, though they weren't designed as cargo ships.

"This will be the world's first cargo airship," he said of the LMH-1.

Can it be flown safely? Dirigibles conjure up flaming images of the Hindenburg disaster in 1937.

"This is not the Hindenburg, which was hydrogen," Hyde said. "This is helium, so it's not a flammable gas and it will be safe."

Kendrick said the ship is built of durable, Kevlar-like material. Airships he's flown in the past have been punctured numerous times — including by bullets fired from the ground — but helium escapes the airship very slowly, so the holes don't threaten the ship's safety.

"You could put a meter-sized hole in it, and you'd want to get it repaired, but you could get down safely," Kendrick said.

Lockheed has also developed a small robot known as SPIDER that uses magnets to cling to the airship's skin. The Self-Propelled Instrument for Airship Damage Evaluation and Repair scouts for punctures and repairs them, he said.

Kendrick said he kept Branson, his billionaire boss, safe on many years of around-the-world airship flights. He said he expects Lockheed's airship will perform well in Alaska.

"We know they are very, very safe," he said.