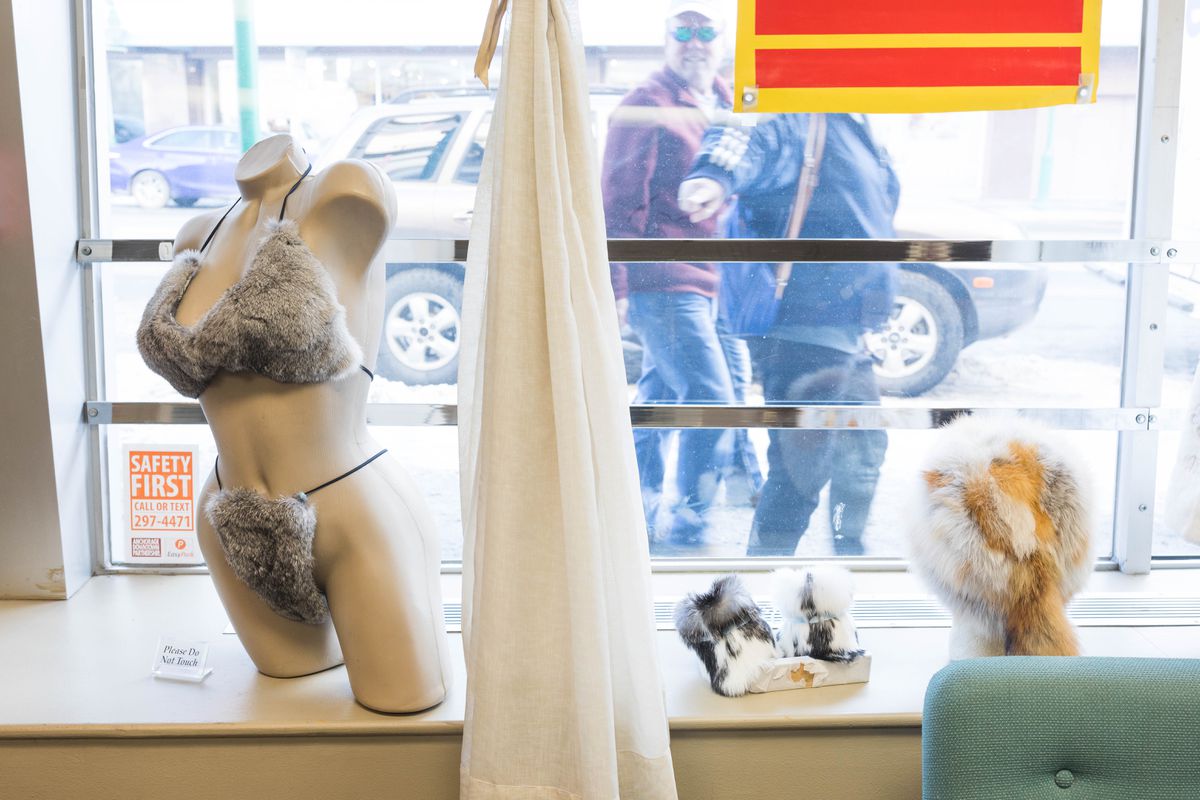 A fur bikini in the display window of Fur Traders of Alaska on Friday, March 10, 2017.

A fur bikini in the display window of Fur Traders of Alaska on Friday, March 10, 2017.

During summer, Fur Traders of Alaska can sell 100 of its signature fur-and-string bikinis, but it's been a few years since business was anywhere near as exciting as the store's No. 1 product.

Especially during the winter, if you look past the white mannequins and rabbit-fur swimwear in the window of the shop across from the Anchorage Fifth Avenue Mall downtown, you probably won't see much happening inside.

"Every year, it's getting slower," said Roberto Cuautle, the shop's owner. "Maybe the economy, or I don't know — but it's slower."

"Business is going down," said Rose Glazer, who is married to Adam and runs the shop with him.

The items people want are changing, too. In the past, she said, their big sellers were boots and jackets, but it's not as common now for customers to come in hunting for the extravagant pieces they might have sought even just a few years ago.

Adam Glazer said he has had to lower some prices to try to generate revenue. A black, sheared mink jacket that's regularly $3,500 is now priced at $1,299. A down-filled jacket with a chinchilla collar is slashed from $499 to $350.

"Everything is moving toward smaller accessories now," he said. "That's what people want, less expensive things. … I think it's the economy, not fur itself."

Just a couple of blocks east on Fourth Avenue is David Green Master Furrier, a store complete with a whole sewing shop on an upper level. Racks of patterns and in-process garments hang to the side of workbenches. The building is a labyrinth of rooms for storage vaults, shipping, fur cleaning and, of course, shopping.

David Green, whose father and uncle own the store, said shorter, lightweight pieces are the trend now.

"It's not just a jacket to go to the opera or church," he said, standing in one of the store's many chilly vaults, where rows and rows of sleek fur coats hang high and low. "It's like putting mink and Patagonia together. The crowd that goes to Girdwood."

That's one way of trying to attract a younger customer set.

"People — they really have to think about wanting to come and look at a fur piece," said Green. Fur at his shop mostly comes from North America and Scandinavia. Adam Glazer said maybe 80 percent of Wild Furs' product is farm-raised in Scandinavia, Canada and the U.S., with about 10 percent coming from Alaska.

In the 1920s, fur farming was Alaska's third-largest industry. Today, the industry is much smaller, but fur remains a feature of the distinctly Alaska winter festival Anchorage Fur Rendezvous, and last year the Alaska Department of Fish and Game issued more than 39,300 fur trapping licenses to state residents.

One Alaska Dispatch News columnist wrote as recently as 2014 about how it remains common to see people wearing their long fur coats to the grocery store during winter.

"The fluffier furs, we're not selling as much as we used to," said Glazer, pointing to a platinum fox jacket. "It's more fun, everyday (items)."

People looking for the lavish fur coats are definitely still around, though. Elizabeth Maseuli, 32, is one of them.

Maseuli works as a tattoo artist at Southside Tattoo in Anchorage, and lives in Eagle River. She loves fur and wears a fur coat almost every day — lately, a men's beaver-fur coat that hits a bit below the waist, which she got from David Green's for a bargain $800. She said she's probably owned about 20 fur coats and loves gifting them to friends. But her coats still take people by surprise around town.

"I don't think it's popular at all, which is crazy to me. People make a big deal out of me and my fur but — I'm in Alaska," said Maseuli, who is originally from Southern California. "People ask, 'What kind of fur is it?' 'Can I touch it?' "

Anti-fur activism could be one reason fewer people are wearing extravagant pelts, but furriers downtown suspect fizzling tourist foot traffic in recent years is one reason they're seeing less business. These days, shop owners say, tourists don't spend as much time downtown, meaning fewer opportunities to wander in and spend money on mukluks, earmuffs or a shawl.

"I think I see more people being shuffled through Anchorage than I see them stay here. … People coming in, checking on their watch," especially among cruise ship passengers who only have a few hours to spend downtown, said Green. But he said he hasn't noticed a slowdown.

Cuautle said tourists are huge for his business. May through September is usually the shop's busiest time. But even tourists don't usually come in looking to spend upward of $1,000 on a jacket.

"They buy accessories, small accessories maybe," he said, a tape measure hanging around his neck. "Local people, they don't buy."

The $125 fur-and-string bikini featured in the window is his No. 1 seller (prices vary by fur type). Still, business is tough enough that he's had to reduce prices on some items as much as 50 percent.

Adam Glazer at Wild Furs also bemoaned the general lack of foot traffic past his store.

"Downtown isn't thriving," he said. "The streets are empty."

Glazer recalls a man waiting outside the store before it opened during one Iditarod weekend maybe 10 years ago. He was waiting to buy 12 fox hats — around $350 apiece, the kind that come with the head still attached. While Glazer acknowledges that was an "exceptional day," the shop didn't see a sale like that this year, though business was good during Fur Rondy.

One recent weekday at the store, a customer named Queen Walker came in looking for fur head wraps for her mom, who lives in Tennessee.

Walker, who wore a sheared blue, reversible fur coat, said she worked at J.C. Penney downtown six or seven years ago, and that's when she noticed "the foot traffic started to change."

But it's not all on the gloomy side at shops that sell fur.

A scrolling marquee out front advertises furs of all kinds. Inside, past the knickknacks, jewelry, refrigerator magnets and taxidermy animals, rows and rows of pelts hang by the heads. Albino Russian raccoon goes for $375. Alaska lynx goes for $350. Black bear pelts range from $349 to about $1,000.

"Business is still strong," said Gillespie. "Might not be as strong as it used to be, because skin sellers are passing and young people aren't picking it up as much."

The shop doesn't sell as much to the Bush as it used to as elders die, she said, but schools in rural Alaska will buy fur directly from the shop and then teach students how to make things with it.

One young fur designer, Sitka-based Alaska Native Peter Williams, said he's focused on doing most of his business out of state because "it's more profitable." He works with seal and sea otter, which he hunts personally.

"Certainly in Alaska there's Alaskans that appreciate seal and sea otter fur … and then there's the tourist market, and that's challenging too," said Williams, who is Yup'ik and got into fur for cultural and spiritual reasons. His company, Shaman Furs, was on display at New York Fashion Week in 2015.

Cuautle, who is originally from Puebla, Mexico, thinks the family store will remain open for years to come, even though times are tough.

"It's a hard business, yes," he said. "But I don't have nothing to do but furs. It's my profession."