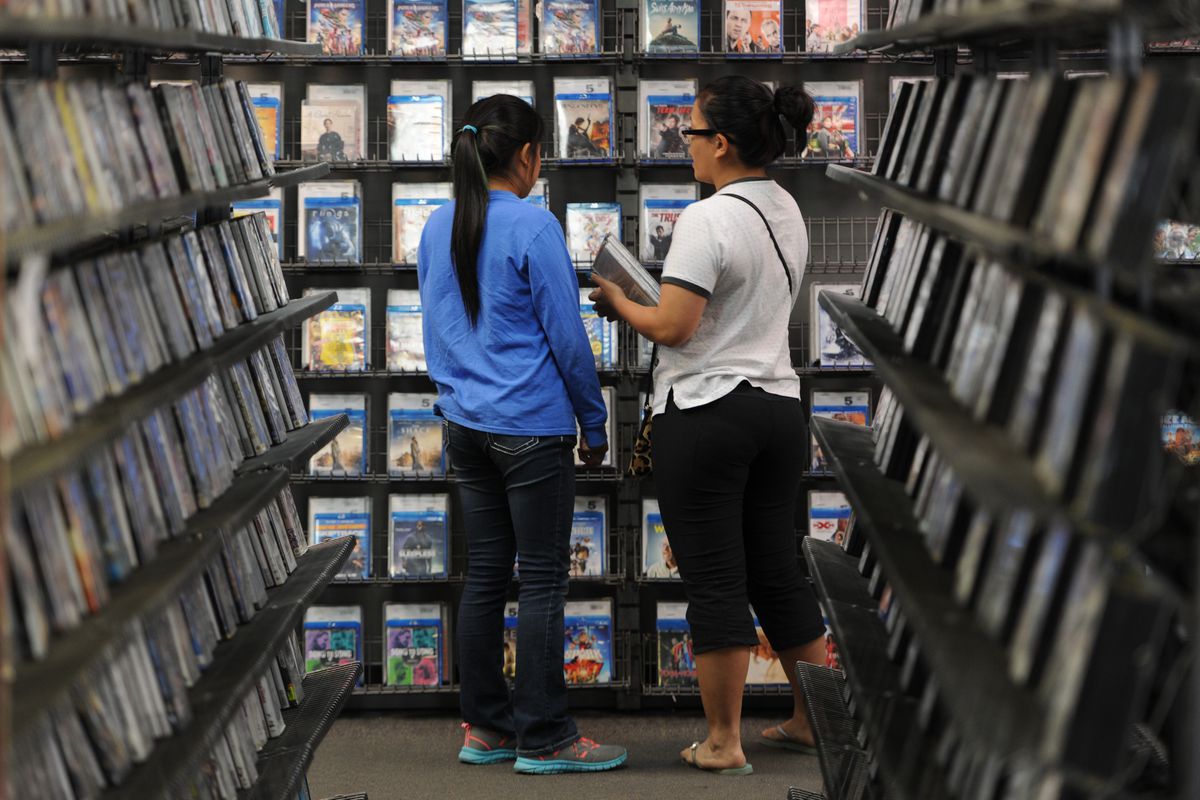 At the Blockbuster store on DeBarr Road in Anchorage, people don't just come for the movies.

General manager Kevin Daymude said he's seen people wander in because they're excited by the very existence of the store itself. He's watched some buy T-shirts bearing the store's name and then go out in front to take photos under the iconic blue-and-yellow Blockbuster sign.

The sight throws a lot of people back to the '90s or early 2000s, when spending Friday or Saturday night at the video store picking movies with the family was a weekend ritual. Shelves of popcorn, candy and sugary drinks accompany rows and rows of horror, comedy, special interest films and more, many of which you can rent for 99 cents for five nights or 49 cents for one night.

Alaska is one of the few places in the U.S. where Blockbusters still exist, and it has more left than any other state. There are also independent video stores from Homer to Anchorage to Fairbanks that have managed to stay in business even though so many people now choose online streaming to watch their shows and movies.

"Obviously you've got more competition," said Daymude, a general manager at the DeBarr store who has worked at Blockbusters in Anchorage since 1991. "A lot of people are so old-school, they want to come in and talk to people face-to-face. They like that personality."

In Alaska, pricey internet can put a damper on binge watching. At Video City on Muldoon Road, general manager Maurice Hamby said he once saw a woman come in with an internet bill that topped $900 from downloading movies. Daymude has similar stories about customers with internet bills from $300 to $700.

On Monday at Video City, customer Jesse DeLaney was searching for a copy of "The Big Lebowski" and ended up buying around a dozen DVDs. He was driving past on his lunch break and decided to stop in.

"I looked over and saw, 'Oh, there's a movie shop, don't see those anymore,' " said DeLaney, 24. He guessed he was probably 17 years old the last time he was in such a store. He's used Netflix in the past but doesn't now, "because the internet out here sucks."

Even though people who don't want to pay for streaming services are a help to Video City and the like, business has still dropped off dramatically since the heyday of the video store, Hamby said.

He retired from another job a few years ago and said he doesn't get paid for his time working at the shop, which mostly sells movies instead of renting.

"You gotta be diversified," he said. Past the blue shelves full of DVDs and carts full of bargain VHS tapes, the shop boasts a glass case full of memorabilia cards of famous athletes and musicians, some of them signed.

The shop also sells large plush blankets, vinyl records and used electronics. A sign reads "Adult Room" above a pink curtain that hangs, far from touching the ground, in a doorway that leads off the main room.

In Homer on the Kenai Peninsula, an independent rental shop called Barb's Video & DVD, first known as Millie's Video Store, has been open since 1981. Charles Higley — known as Chucklez — bought the store in 2008, and his wife Janet Higley helps run it.

She said they've been ordering fewer videos as business has slowed. The store has been up for sale in the past, she said, but the couple hasn't been able to find a buyer.

"As long as it's paying its bills, it will be open," she said. "We have not had to put any money into it, but we have not really gotten any money out of it."

Up in Interior Alaska, Keith Toman owns an independent store called E.T.Z. Video in Fairbanks. (The area also has two Blockbusters, one in North Pole.)

E.T.Z. has been open since 2005, and Toman said one reason he's still in business is that many of his customers can't afford internet. Still, he attributes struggles in the video industry to a culture of "instant gratification" among today's consumers.

"I'm constantly having to re-educate my consumers on — they need to be patient. It's a real issue. It's all across the age range," he said. People have also come into his store, held up a movie and asked him, "Is this on Netflix?"

Alaska's Blockbusters are owned by Austin, Texas-based licensee Border Entertainment. Alan Payne, owner of Border, said technology like Netflix and Hulu or video rental kiosks like Redbox aren't the only factors at play.

The Great Recession is when he first felt pains in what he once considered a "recession-proof" business. Competing for people's free time with the distractions of social media is another challenge.

"There was no social media when video was at its peak. Think of all the hours spent on Facebook, whatever else," he said.

The overall strength of retail in Alaska has helped keep those stores alive, Payne said. Like at other stores here, he said the price of data in Alaska helps his business, too. Some customers are drawn in by the sentimentality, but that only goes so far.

"When we close a store, we hear it over and over: 'I love y'all, why are you closing?' And it's like, 'When was the last time you were here?' And they're like, 'Well, can't remember.' It's the memory of it," he said. The loyal customers "know our days are numbered."

On a recent Friday afternoon at the DeBarr Blockbuster, Micheal Cook and his family stopped in to browse titles, but not with much intent to rent or buy anything. He's in the U.S. Air Force, and they just arrived here a few weeks ago from Tennessee.

Browsing through the new release shelves nearby, 59-year-old Mike Menzel had picked out "The Fate of the Furious" and "John Wick: Chapter 2." He works on the North Slope, two weeks on and two weeks off, and said he doesn't use any streaming services.

"Eventually I might have to," he said. "It'll be a sad day when this place closes."

Glenn Howson, 70, was back for the second day in a row and also renting action movies. He uses Netflix, but not as much as he stops by Blockbuster. Like most brick-and-mortar customers, he likes being able to walk actual aisles and see signs that alert him to new releases.

[Alaska is about to lose another Blockbuster video store]

Earlier this year, a CBS News story about this location drew national attention to it. Daymude said since that story ran, the store has received calls from all around the country.

"One guy called from South Carolina and opened up to me and said, 'You guys were a huge part of my childhood. Can you mail me a membership card just to have it?' " said Orvic Espino, a part-time manager. So, they mailed him the card.

But neither novelty nor regular customers appear to be total saviors for Blockbuster. Three of the stores in Alaska have closed in the last year or so — one in Anchorage, one in Kenai, and one that's shutting its doors in Eagle River this month. After that, the state will have six left.

Just the opposite may be in the works for Video City. Hamby said the shop is looking at opening two new locations perhaps later this year or next year, one in Midtown and another in South Anchorage.

He and Toman both point to the comeback of vinyl records as a hopeful indicator that, maybe, something similar will happen with DVDs.

"I hope video stores will be around for years to come, but that's up to the consumer," Toman said.