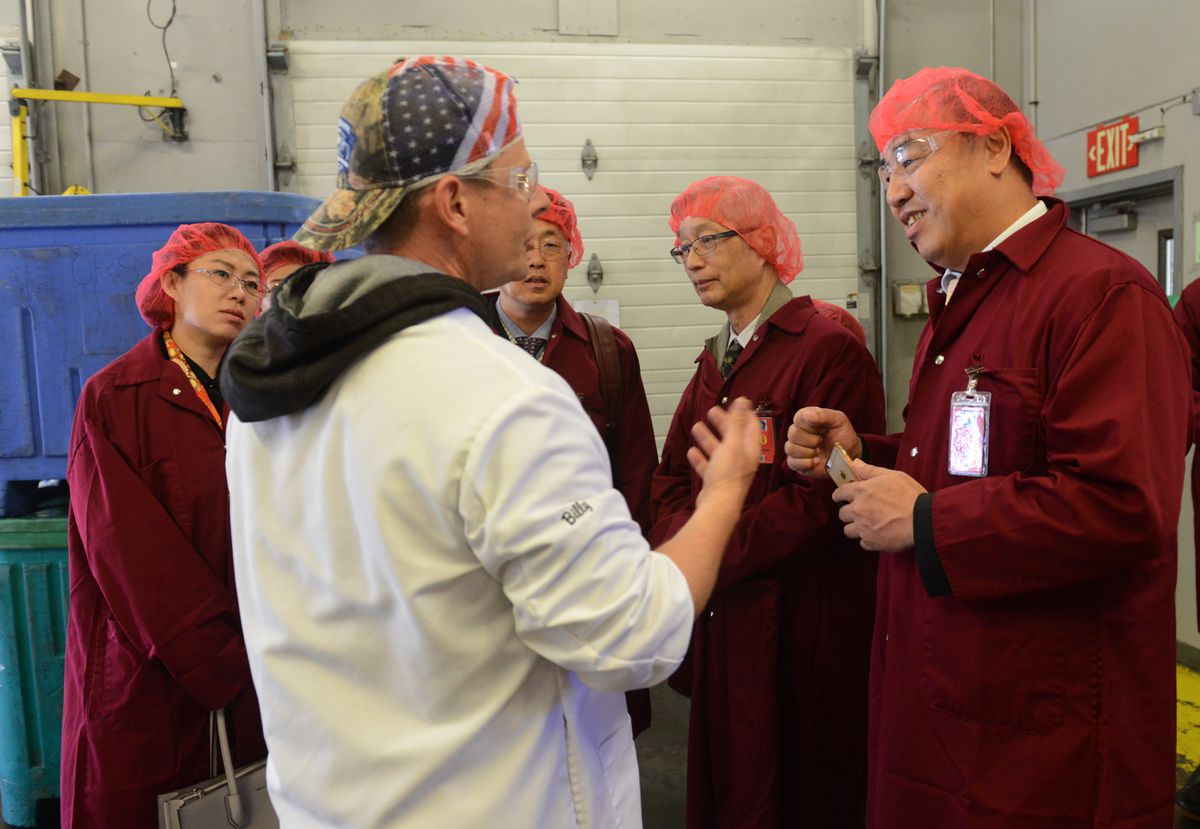 Billy Green, general manager of the Copper River Seafoods Anchorage plant, talks with Ming Sun, director of the World Trade Center in Harbin, China, during a tour of the seafood plant in Anchorage on Friday. (Bob Hallinen / ADN)

Billy Green, general manager of the Copper River Seafoods Anchorage plant, talks with Ming Sun, director of the World Trade Center in Harbin, China, during a tour of the seafood plant in Anchorage on Friday. (Bob Hallinen / ADN)

A Chinese delegation visited Anchorage this week to talk to local business leaders about opportunities for trade between Alaska and Harbin, a city of about 10 million people in northeastern China.

The Hua Hong Group, a Beijing-based conglomerate and developer of the World Trade Center Harbin, met Friday morning at the Anchorage Economic Development Corp. offices with representatives from companies that work in shipping, engineering and more.

The visit in Anchorage is just the latest example of interest from both China and Alaska in strengthening trade ties with each other. It comes on the heels of Gov. Bill Walker's trade mission to the country last month.

Sui Jin Kon, a vice president at Hua Hong Group, said the trip was an offshoot of Walker's visit. She added that the delegation has recognized "huge opportunities" between Harbin and Alaska. That's in part because of commonalities in terms of latitude and climate, she said, and the short (6 1/2-hour) transit time to and from Anchorage.

"That presents a lot of opportunity for us to explore trading of live seafood, obviously, because that's one of the things Alaska is obviously famous for," Kon said. "It's a prized commodity in China as well. We're looking very much at how we can exploit short transit times."

There's a "huge emphasis" on seafood, Kon said, because there's a growing interest for non-farmed seafood in China and consumers are willing to pay more for it.

Shipping company Matson had a representative both on Walker's trip to China and also at Friday's meeting.

"Today, from what I gathered from the meeting, they're looking at opportunities for building and growth in their region," said Matson spokeswoman Lindsey Whitt. "So Matson is going to research all business opportunities, including in that region."

Asked about concerns over President Donald Trump's comments about tariffs on China and a looming trade war, Kon said she believes that's something that stakeholders will be able to work through.

"I would say that we have to be aware of all the political ramifications of whatever we do, but that's just business," she said. "It's business all over the world, it's not particular to the U.S., not particular to China, it's everywhere. And we just have to work with what we have, but business will go on as usual."

Sean Carpenter, spokesman at the AEDC, said that because China is already Alaska's largest trading partner, it just makes sense to further develop that relationship.

"They're the ones who make decisions and they have a lot of influence," Carpenter said, referring to this week's visitors. "If we impress them and they like what they see, it bodes well for us and for them."