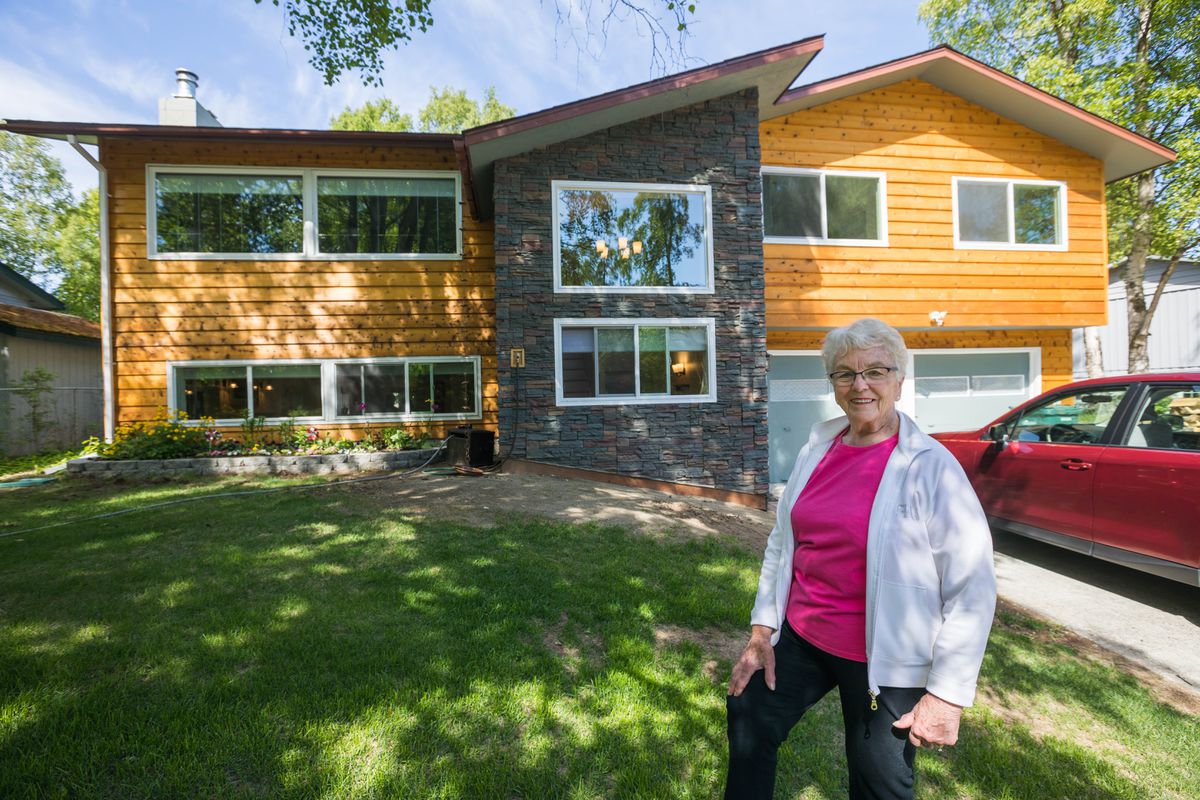 Former Alaska state legislator Alyce Hanley poses outside the apartment she had built into the bottom floor of her home in Sand Lake on Thursday, June 7, 2018. Hanley, who is 84, wanted to live with her children but have her own living space. (Loren Holmes / ADN)

Former Alaska state legislator Alyce Hanley poses outside the apartment she had built into the bottom floor of her home in Sand Lake on Thursday, June 7, 2018. Hanley, who is 84, wanted to live with her children but have her own living space. (Loren Holmes / ADN)

On his 1.5-acre lot near Kincaid Park in Anchorage, Chris Herman wanted to build a detached garage with an apartment on top, as a future home for his aging parents.

In the past, Herman's plans never made it past the city permitting department. But recently, Anchorage became the latest city to overhaul its regulations to make it easier for people to build small houses or apartments next to or inside existing homes.

Popularized by shows like HGTV's "Tiny Homes," living small is a national trend toward multigenerational living, a smaller urban footprint and downsizing. But in Alaska, particularly in communities hemmed in by mountains and water, officials are increasingly turning to "accessory dwelling units" to contend with limited land and high energy and housing costs, according to planners and community development officials.

In recent years, cities like Juneau and Kodiak have opened up regulations to allow stand-alone backyard cottages up to about 1,000 square feet in single-family neighborhoods. The same goes for "mother-in-law" apartments, or separate living units built into a main house. (Planners avoid the phrase "tiny home," because it typically describes a house on wheels.)

The living units have to be connected to water, sewer, gas and electric service. It isn't cheap to build one. Architects and developers say the costs usually exceed $100,000.

Since 2015, the city government in Juneau has handed out $6,000 grants to homeowners who want to build backyard cottages or apartment attachments. Nearby, in Sitka, policymakers are drafting laws to ease restrictions on apartment additions, as existing laws have led to little construction.

In Kodiak, a small island community populated by an expanding Coast Guard base, the cost and availability of housing is a major issue, said Jack Maker, the acting director of the Kodiak community development department.

As well as allowing larger accessory apartments, officials there last year created a special zoning district for smaller lots. The minimum lot size had been 7,200 square feet. The new district cuts that in half, in hopes of encouraging smaller-scale development, Maker said.

Then, this month, the Anchorage Assembly significantly opened up the city's regulatory framework for building backyard cottages and accessory apartments. Among other changes, the Assembly allowed the units in single-family neighborhoods for the first time.

[Condos on tops of shops: A Dimond Boulevard plan signals a new kind of Anchorage growth]

The administration of Mayor Ethan Berkowitz advocated for the changes, calling it a way to meet housing demand and generate income for residents. So did a group of architects and developers who make up a committee within the Anchorage Economic Development Corp. and helped craft the new laws.

"We've all tried to build these," said Anchorage architect Melissa Morse, who has had clients start on accessory apartment projects but drop them because of the regulations. "It's not as easy as it should be."

Some residents pushed back against the changes. The most heated opposition came from Rogers Park, an old neighborhood near downtown with a lot of smaller lots. Neighbors said they were worried about parking problems, property values, overcrowding and intrusion on adjacent homes. Some questioned whether it was a quiet attempt to provide housing to people who were homeless, though city officials have said that is not the case.

Community councils in Rogers Park and Turnagain sent letters urging the Assembly to limit the size and height of the structures. The councils also wanted the city to maintain a ban on detached small homes in single-family neighborhoods. Midtown Assemblyman Dick Traini, who represents Rogers Park, tried unsuccessfully to limit the size of the structures; the other assemblyman for Rogers Park, Felix Rivera, voted in favor of the new regulations, sparking talk of a recall from some constituents on social media.

The worries mirrored controversies that have played in other cities in the Lower 48 that have adopted similar reforms, including Lawrence, Kansas; Santa Cruz, California; and Portland, Oregon.

"The (accessory dwelling unit) is the truly sustainable option to meet affordable housing," said Michael Scarcelli, the director of planning and community development for the city of Sitka. "Plus, I think it is more realistic in a place like Sitka, where we probably don't want a big high-rise blocking the view."

In Juneau, the grant program has led to a number of smaller units that are either attached to or separate from bigger homes, said Brenwynne Grigg, who works for the city's community development department. Grigg said most of the program participants are now renting the units out to strangers. But some are building in anticipation of an elderly parent, she said.

Similar demand for senior housing is expected in Anchorage, where there is a fast-growing senior population.

As she entered her mid-80s, Alyce Hanley didn't want to live alone in her big house. She wanted to live with her adult children.

But the former Republican state representative from Anchorage also wanted her own space in the house, with a separate full kitchen and living area. She toured several dozen homes in Anchorage that offered "mother-in-law" apartments, but couldn't find anything that fit what she wanted.

In the end, Hanley and her son, former education commissioner Mike Hanley, gutted the longtime family home in the Sand Lake area to build Alyce her own apartment. Her unit is on the bottom floor of the split-level house. Hanley and his wife live upstairs.

Hanley moved in in December. She loves her full kitchen and walk-in closet.

"To me, this is just absolutely perfect," Hanley said.

At the time, accessory apartments weren't allowed in single-family neighborhoods. The Hanleys had to negotiate with the city and sign a written promise not to rent it out.

Susan Fison, a former Anchorage planning director who is friends with Hanley, toured accessory apartments in Portland by bike last fall. Most people living in the units were family members, Fison said. She also has aging parents, and right now, there are few options in Anchorage that are one level and in a residential neighborhood.

"You can get a condo, but you aren't living with family," Fison said.

Anchorage developer Andre Spinelli, a member of the city Planning and Zoning Commission, said he's planning a development on a lot he owns in South Anchorage where the homes all come with accessory apartments. The new regulations allow double the number of kitchens, Spinelli said. He also said people buying into the neighborhood would know what they're getting.

While often pitched as a way to boost a city's housing supply, the smaller units are also popular as vacation rentals through sites like Airbnb. Cities are grappling with how, or if, to regulate or restrict the use of accessory apartments as vacation homes.

Sitka, for example, does not allow accessory apartments to be rented for less than 90 days. But that may change — Scarcelli, the community planning official, said that high housing prices make short-term rentals more attractive for people who need an extra income stream.

Herman, the Kincaid Park-area resident who has wanted to build a garage apartment, said he and his wife plan to meet with an architect soon, now that Anchorage has revised its regulations. He said he plans to immediately put the unit up for rent, possibly through a vacation rental site.

But the long-term plan, he said, is to move his parents in when they need it.