Condos on top of shops: A Dimond Boulevard plan signals a new kind of Anchorage growth 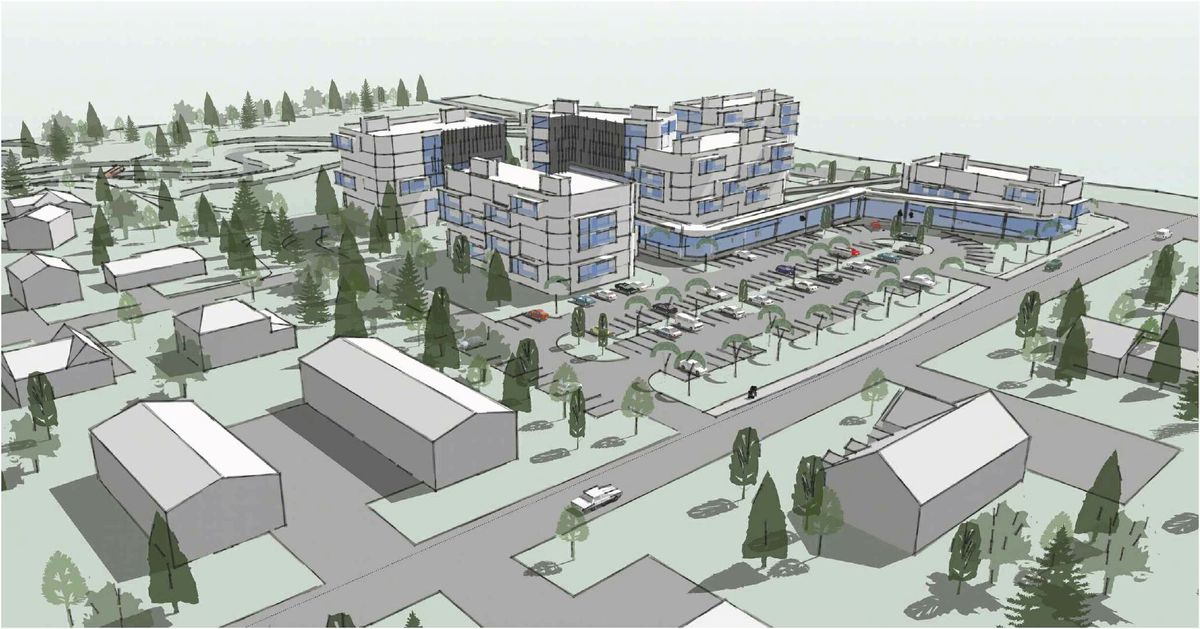 Emerald Hills is a proposed development on the corner of West Dimond Boulevard and Arlene Street. It would include condos built on top of retail space as well as restaurants. (Artist rendering provided by JR Wilcox)

Emerald Hills is a proposed development on the corner of West Dimond Boulevard and Arlene Street. It would include condos built on top of retail space as well as restaurants. (Artist rendering provided by JR Wilcox)

A corner of West Dimond Boulevard in South Anchorage may be transformed into more than 200 condos built on top of shops, eateries and green space — a proposal that signals how city officials hope Anchorage will grow in the coming decades.

The proposed development at the northeast corner of Dimond Boulevard and Arlene Street is in its early stages. At this point, owner and developer J.R. Wilcox said he imagines a mix of underground parking, slender towers and condos with small floorplans.

He'd like a ground floor that includes a coffee shop and bakery, and a pedestrian-friendly layout that connects to surrounding neighborhoods.

"We kind of spent a century (in Anchorage) filling up all the green spaces in not necessarily the most efficient way we could," Wilcox said, standing recently in front of the wooded six-acre property recently. "How we continue to have places where people can work and live is I think, a really big issue."

The project, known as Emerald Hills, reflects a push by the administration of Anchorage Mayor Ethan Berkowitz for compact developments of apartments or condos on top of stores and offices. City planners predict Anchorage will be short on housing for several thousand people by 2040, even amid the state recession and a stagnating local population. To avoid land shortages and higher costs, the city's formal plan for long-term growth recommends mixing housing and retail in areas like downtown, Midtown, Muldoon and Fairview.

[Smaller homes, less sprawl: How Anchorage could grow over the next 20 years]

Such buildings are common in urban areas of the lower 48 and rare in Anchorage. But city planners hope that will soon change. Earlier this year, the city Assembly authorized a new, high-density zoning district aimed at blending housing with retail.

Wilcox's project, known as Emerald Hills, is the first application.

"I'm happy to be test case 001 on whether we can do this," said Wilcox, a former president of the board of the Anchorage Chamber of Commerce.

In rolling out the proposal, Wilcox and his partner, Michael Bullock, have encountered resistance from neighbors who are raising concerns about congestion, among other issues. Earlier this year, the Sand Lake Community Council declined to offer support for the project.

Nikki Rose, the council president, said members of the group want the developers to come back and give more details on the plans.

Wilcox pointed to a detailed traffic study that made recommendations for easing congestion. But he said that for now, developers are just offering a vision for what's possible.

They first need to successfully rezone the property. The application heads to the city Planning and Zoning Commission next month, then the Assembly.

Wilcox and Bullock, are among a few developers currently experimenting with mixed-use. Last year, the nonprofit Cook Inlet Housing Authority opened a building at 36th Avenue and Spenard Road with 33 apartments on top of retail. The nonprofit is planning a similar development in downtown Anchorage.

Developers David Irwin and Mark Lewis have proposed a hotel and housing in an overhaul of Anchorage's downtown transit center, and a grocery store and housing in a major new development at the intersection of Tudor and Elmore Roads.

Wilcox's property sits in a residential zone east of a Skinny Raven Sports store and south of a residential neighborhood. There's a park to the west at the bottom of a bluff. Campbell Creek runs alongside the park, and residents can use a fish-viewing platform. Further west on Dimond Boulevard is a bustling commercial area with a Fred Meyer grocery store, strip malls and gas stations.

Under the current zoning, Wilcox and Bullock could build about 80 townhomes. At first, the developers planned a re-zone that would allow a few hundred condos to be built, but no businesses.

Then, a few years ago, Bullock said, he met with Mayor Ethan Berkowitz and city development director Chris Schutte. He said the mayor and Schutte encouraged him to pursue the mix of housing and business.

Schutte said city planners offered the specific recommendation for the zoning change. He also said the proposal would align with the city's 20-year plan for the area.

With the current application, Wilcox and Bullock would be able to build up to about 260 housing units on the property and about 20,000 square feet of retail space. Wilcox estimated the project would cost up to $50 million if the developers build the maximum number of homes, but he said the price tag and number of units isn't known yet, or whether it will be condos or apartments.

Wilcox is the former president of the board of the Anchorage Chamber of Commerce. He said he's given a lot of thought to city plans and how Anchorage's population will grow. He and his family bought the Emerald Hills property in 2013 after a bank foreclosed on it.

He said he'd like to help make the area more connected with the Campbell Creek trail system, and make it easier for people to walk or bike to small businesses.

"This is such an incredibly positive thing for this part of town," Wilcox said. "A lot of people live here, but you've mostly just got the big-box stuff going on."

Note: This article has been edited to correct the spelling of Michael Bullock's name.