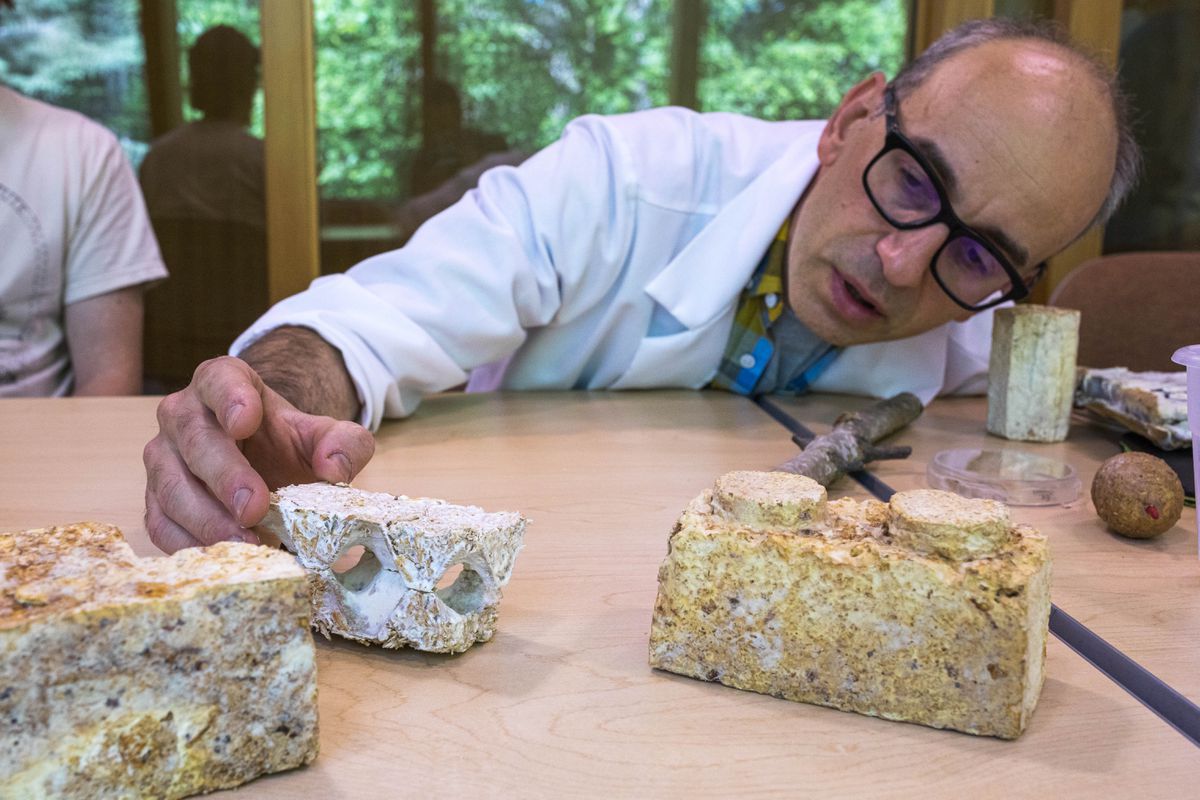 Dr. Philippe Amstislavski with samples of insulation made from fungi, in his lab at the University of Alaska Anchorage on June 21, 2019. Amstislavski is a co-founder of Rhizoform, a biomaterials company. (Loren Holmes / ADN)

Dr. Philippe Amstislavski with samples of insulation made from fungi, in his lab at the University of Alaska Anchorage on June 21, 2019. Amstislavski is a co-founder of Rhizoform, a biomaterials company. (Loren Holmes / ADN)

In a University of Alaska Anchorage laboratory, researchers have been growing lightweight and fuzzy panels from mushroom tissue that they say could be used as insulation for shipping frozen fish.

The panels are the latest example of efforts to find biodegradable alternatives to plastics like Styrofoam, which can’t be recycled in Alaska and have been building up in oceans. Researchers want to replace the Styrofoam-lined boxes found at major retailers and sporting goods stores in Alaska.

Commercial fishing companies are expecting to give the so-called “bio-boards” a real-life test run this summer.

The researchers believe the technology can go beyond insulation. They imagine that someday, day-to-day objects like chairs will be biodegradable and grown instead of manufactured.

“We’re not saying it’s going to be solving all the world’s problems,” Philippe Amstislavski, an associate professor of public health at UAA who has led the research effort. “But it’s addressing it in a way that’s thinking bigger.”

At UAA’s Engineering and Biomaterials Lab recently, Amstislavski, an associate professor of public health, showed off a sample of one of the panels. It was lightweight and looked almost like honeycomb from the side.

After the tour of the lab, Amstislavski walked into the woods outside, to a place where he had buried a sample of the insulation in 2017. The pieces he picked up were crumbling and had roots growing through them.

Amstislavski was born in the Ural region in western Russia to biologist parents and spent his early childhood harvesting mushrooms. His father studied salmon migrations in the Russian Arctic and showed him the damage industrial pollution had caused to salmon spawning grounds.

Amstislavski studied the biology of mushrooms and fungi at Yale School of Forestry. He also became interested in human health, architecture and urban sustainability. As an assistant professor of environmental health at the State University of New York, Amstislavski started to explore creating material biologically instead of synthetically. Mushrooms, he knew, grew quickly into tiny, resilient, strong networks called kitin, and he wondered if that material could be a substitute for synthetic wall insulation.

He brought his research to Alaska in 2013, where he initially took a job running a Fairbanks-based itinerant nursing team in rural villages. The team delivered vaccines and medications in Styrofoam boxes.

Nearly every village Amstislavski visited had a dump overflowing with plastic. There wasn’t an easy way to get rid of the Styrofoam. Villages have struggled with plastic litter for years, with plastic bag bans dating back to at least 2000. One man recently posted a photo on the website Reddit showing five boatloads of Sytrofoam he’d collected from a lake near the tiny northwest Arctic community of Bettles.

Amstislavski moved into a teaching job at UAA in 2014 and began testing out microorganisms in a lab. He wanted to see which fungi could match the properties of Styrofoam. The tests involved putting different fungi into a block of sawdust to see what happened, Amstislavski said.

One early model looked like a giant mushroom that charred when it was lit on fire. The surface felt like the exoskeleton of a crab.

The lab also brought in Alaska Native students with the Alaska Native Science and Engineering Program to brainstorm uses for the foam-like material as insulation. The idea emerged to try to use it for shipping fish, Amstislavski said.

It wasn’t clear if such a thing was practical or cost-effective. Since insulation materials were all synthetic, there was no information or knowledge or publications about a similar product, Amstislavski said.

To find out, Amstislavski started working with Joey Yang, a civil engineering professor at UAA who has extensively researched engineering in cold-climates. A $25,000 UAA Innovate grant and Conoco-Phillips Science and Engineering Endowment helped launch the research and provided seed money for a lab.

Amstislavski and Yang also co-founded a startup, Rhizoform, that would be aimed at commercializing the technology.

Before long, the researchers started to hear from fishermen.

Ryan Peterson is the co-founder of Su Salmon Co., a small commercial set netting business that harvests salmon at the mouth of the Susitna River, 27 miles from downtown Anchorage.

Peterson approached Amstislavski after a presentation at the North by North conference in Anchorage. Like the Alaska Native students, Peterson thought the material had the potential to be used in shipping frozen fish.

The company doesn’t like to ship fish now because the main option for insulation is Styrofoam, Peterson said. He said he’s seen it littering beaches in his travels, and the material seems to contradict his company’s message of sustainability.

"We’re hyper-conscious about the environment because we rely on it so directly,” Peterson said.

By the end of August, Peterson’s company plans to ship a few test kits with frozen fish cradled by the boards, possibly with thermometers and instructions on how to tell them the condition. Peterson said his company was trying to consider a range of factors, like how long the box could sit unexpectedly on an airport tarmac, or on a hot doorstep in the lower 48.

At this point, the panels, treated with a special mixture, take about eight days to grow and dry. Then they’re sliced into box-shaped pieces. A natural fuzz covers the pieces, a kind of fleece coat that traps in heat or cold, Amstislavski said.

The panels are also edible, though the taste is very bitter, said Sam David, the lab’s production manager and mycologist.

After testing that the panels work, the next step would be to scale the prototypes up to mass production, Amstislavski said. The goal is to compete with plastic Styrofoam on cost and effectiveness. Amstislavski said he hopes that businesses will help invest.

As of now, the panels may not be cheaper or more insulating than Styrofoam, David said.

“But you can throw these in the forest and two years later, you’ll have soil,” he said.