As BP exits Alaska, 1,600 employees are waiting to find out what’s next 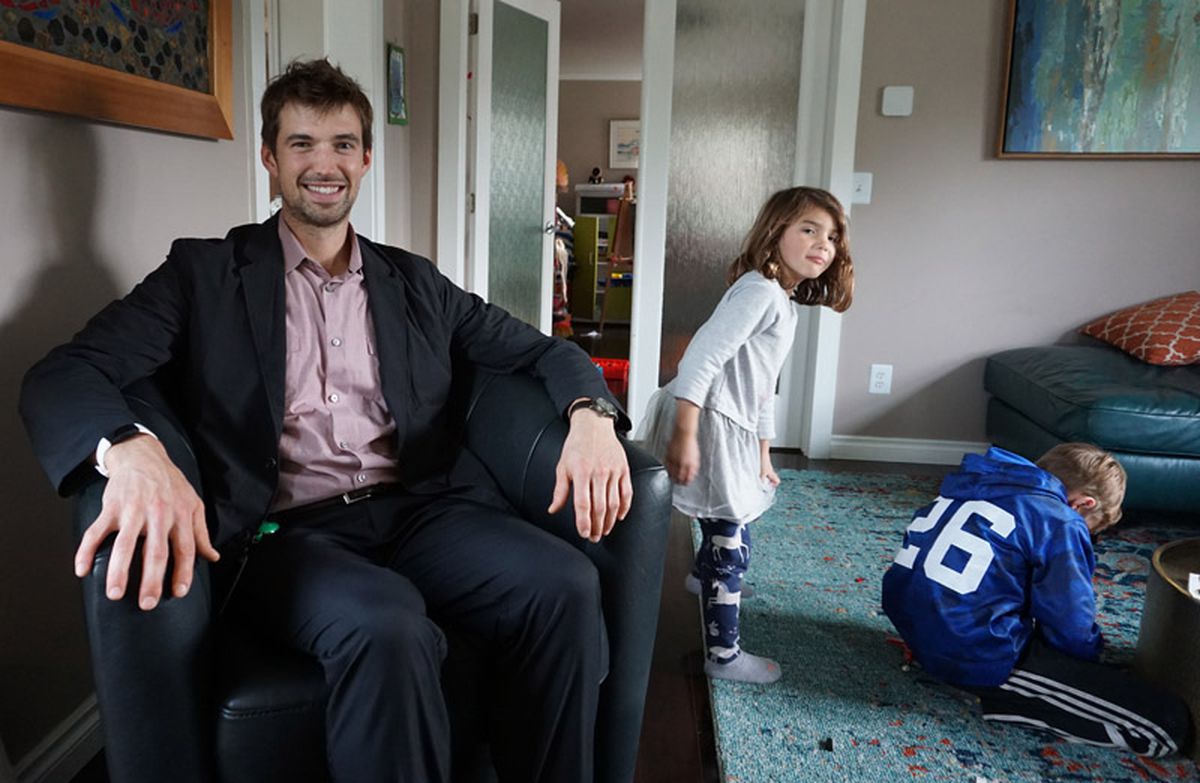 BP employee Joe Miller in his Anchorage home with his children Hadley, 5, and Liam, 8. (Photo by Elizabeth Harball/Alaska’s Energy Desk)

BP employee Joe Miller in his Anchorage home with his children Hadley, 5, and Liam, 8. (Photo by Elizabeth Harball/Alaska’s Energy Desk)

On Aug. 27, BP engineer Josh McFarland entered a packed conference room, where company leaders addressed everyone simultaneously via video conference: “Sort of like watching the finale to a TV show,” McFarland said.

That day, BP announced it intends to sell its entire Alaska business to Hilcorp for $5.6 billion. McFarland said he and his colleagues were stunned.

“A lot of people’s reaction, including mine, was emotional at first — it was sort of awestruck,” said McFarland, who has worked at the oil company for four and a half years. “Because it was like, ‘Man, what is Alaska like without BP?’”

BP has operated in Alaska for over half a century and has long had a hand in running the state’s biggest oil field, Prudhoe Bay. The company’s plans to exit the state have left hundreds of workers like McFarland in limbo.

Today, many BP employees are waiting to learn if they will get a job offer with Hilcorp, the company buying BP’s Alaska business, or if they will get an offer to work for BP outside Alaska. They have been given the choice to pursue those opportunities or they can take a severance package up front.

Employees seeking jobs with BP and Hilcorp have been told they will learn what their options are by late December.

Of the roughly 9,900 people who work directly in Alaska’s oil and gas industry, more than 1,600 work for BP. And it’s widely accepted that Hilcorp, an oil company with a reputation for cutting costs, will not be hiring back all the BP employees who are currently working there.

So now, as they find themselves in the middle of one of the biggest industry transitions in the state’s history, BP’s Alaska employees are all trying to figure out what’s next.

“There are so many choices, and there are good things about each choice,” Barker said. “But some of those options come with sacrifices, you know? Or wholesale changes.”

Barker, a drilling engineer, described getting a job at BP as getting a “golden ticket.” She was hired from outside the industry, and BP provided her with coursework and training so could get the job she has today, a drilling performance analyst.

Barker has looked BP jobs in Houston, Texas, but as someone who grew up in Alaska, she said it’s hard to imagine living there.

But Barker is thinking about much more than just spiders, traffic and hurricanes. She has a family here: two small children and a husband who is a lifelong Alaskan with a good job at the Alaska Railroad.

Barker feels many Alaskans haven’t realized the transition is bigger than just BP and the oil industry.

“This is a change in ways we can’t even begin to appreciate, that will take years to really, fully understand. There’s a whole lot of people that have a lot of things to decide in the next few months…for a lot more people than just BP employees.”

Barker emphasized she doesn’t think the change is necessarily bad. She said she’s impressed with what Hilcorp has done with the oilfields it operates. It’s more that it’s an uncertain time for a lot of people, she said, from the caterers who feed Prudhoe Bay workers to the people at the daycare who look after her children.

Another person living with that uncertainty is Joe Miller. Miller was just months into a new job at BP when the announcement landed — his first day was March 3. He said he’s feeling “cautiously optimistic.”

“One thing about the oil and gas industry is it’s taught me to deal with or manage change much better than others,” Miller said.

In Miller’s tidy blue house in downtown Anchorage, Liam and Hadley ate an after-school snack as their father described how they are his top priority as he weighs what’s next.

“Alaska is home for me and our family, we have both sides of the family here,” Miller said. “We’re very fortunate. So I’d say we are looking for Alaska opportunities.”

Miller said the day BP dropped the news was an “emotional roller coaster” for him. It happened to be Hadley’s first day of kindergarten. When he went to pick her and Liam up from school, they already knew what had happened.

“The kids were in the back, and (Hadley) had heard about the announcement and said how concerned she was and that, ‘Dad, everything is going to be OK.’” Miller said. “And I just wanted to start crying. It was a good reminder that everything with the Millers is good. We have a solid family, we are going to be OK.”

McFarland is also trying to stay positive. He’s 29 years old and doesn’t have a family here. And while he was happy to get a job with BP in Alaska — he likes the outdoors and enjoys how quickly he can get to trails and rivers from Anchorage — he sees the transition as an opportunity for change.

But McFarland recognizes that for others at BP, the situation is harder.

And for the next few months, at least, Miller, Barker, McFarland and hundreds of other BP employees in Alaska won’t know exactly what lies ahead.

This article was originally published by Alaska’s Energy Desk and republished with permission.

Elizabeth Harball is a local/state news editor for the Anchorage Daily News. Before joining the ADN in 2019, she was a reporter for Alaska Public Media / Alaska's Energy Desk covering the oil industry and other topics, and previously was a reporter for E&E News in Washington, D.C.