BP will sell all its Alaska assets to Hilcorp 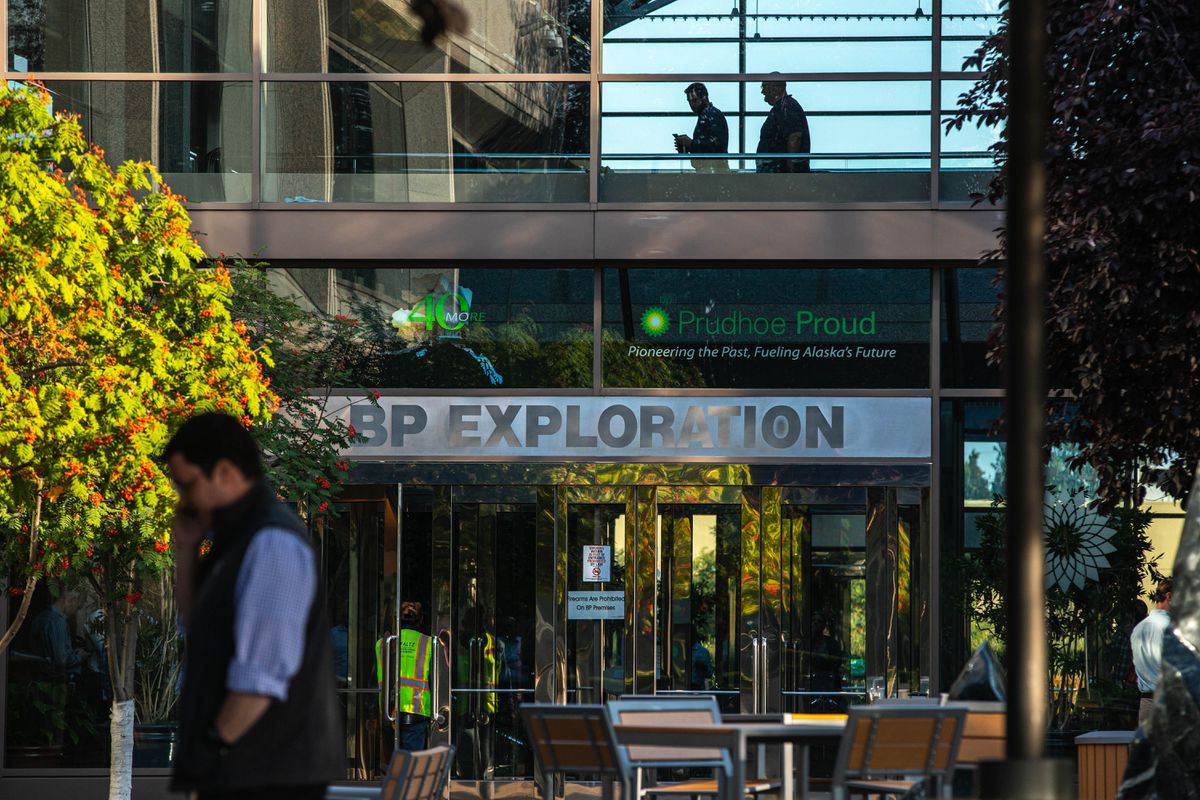 The BP building in midtown Anchorage on Tuesday, Aug. 27, 2019. BP announced Tuesday that it plans to sell all of its Alaska assets to Hilcorp Alaska for $5.6 billion. (Loren Holmes / ADN)

The BP building in midtown Anchorage on Tuesday, Aug. 27, 2019. BP announced Tuesday that it plans to sell all of its Alaska assets to Hilcorp Alaska for $5.6 billion. (Loren Holmes / ADN)

After six decades working in Alaska, the longtime operator of the giant Prudhoe Bay oil field announced Tuesday it plans to sell all its assets in the state to Hilcorp Alaska for $5.6 billion, a major shakeup in the Alaska oil industry.

BP Alaska shared the news with the 1,600 people it employs Tuesday morning.

“Saying goodbye won’t be easy, but we can all be very proud of how we have set the field up for 40 More (years) as a new chapter begins for Prudhoe,” wrote BP Alaska President Janet Weiss in an email to employees.

The deal includes BP’s stakes in Prudhoe Bay, the 800-mile trans-Alaska pipeline, the Point Thomson and Milne Point fields, and leases in the Arctic National Wildlife Refuge, on land owned by an Alaska Native village corporation.

Hilcorp will inherit the BP building, said Megan Baldino, a BP spokeswoman. The deal does not include oceangoing oil tankers owned by BP that move crude oil out of Alaska, though BP and Hilcorp are in conversations about those assets, Baldino said.

How BP’s employees will be affected is unclear, said Baldino.

“Hilcorp will have to come in, look at our business and determine what the organization looks like moving forward,” she said.

The proposed deal is subject to state and federal regulatory approval but is expected to be finalized in 2020, BP said. Changes are not expected in the next couple of months.

BP, based in London, began working in Alaska in 1959, drilling the Prudhoe Bay confirmation well in 1968. The field has yielded more than 13 billion barrels of oil since production began there in 1977, making it the most prolific in U.S. history. It remains responsible for more than half the North Slope’s daily oil production of about 500,000 barrels.

“Our people have achieved incredible success over the decades developing and maintaining these hugely important assets, but we are confident this sale is in BP’s and the state’s best interests and the business will be best positioned for the future with Hilcorp,” Weiss said in a statement. "We will do all we can to ensure they are able to quickly build on the strong foundation that we and others have built here.”

BP has said it was shooting for 40 more years of life at Prudhoe Bay, and this year conducted the first-ever three-dimensional seismic shoot of the entire field, hunting for hidden pockets of oil. BP operates Prudhoe on behalf of ConocoPhillips and ExxonMobil, and holds a 26 percent stake.

But BP has decreased its presence in Alaska in recent years, including selling two fields to Hilcorp in 2014, along with portions of two other fields. In 2018 BP unloaded its stake in the large Kuparuk field to ConocoPhillips. The company’s oil production has shrunk from about 125,000 barrels of oil in 2014, to an estimated 74,000 barrels daily this year.

Hilcorp is a privately owned company based in Houston, Texas, founded by billionaire Jeffery Hildebrand.

It began acquiring Cook Inlet assets starting in 2012, and quickly became the dominant oil and gas producer in the basin and Southcentral Alaska before expanding to the North Slope.

Hilcorp has boosted the relatively small levels of oil production in Cook Inlet near Anchorage and invested $90 million there to improve an oil delivery system and reduce the risk of spills. But state regulators in 2017 hammered the company for frequent violations of requirements designed to protect workers and the environment. And the company needed months to shut off a winter natural gas leak from a subsea pipeline in the Inlet in 2017.

But BP has also faced violations in Alaska, including in 2006 following a pair of pipeline leaks. One remains the largest on the North Slope at more than 200,000 gallons of oil. The leaks led to fines, upgrades and a BP guilty plea for negligently discharging oil after the company admitted it knew of corrosion but failed to properly monitor the pipelines.

[Timeline: BP and Hilcorp in Alaska]

“Hilcorp has a proven track record of bringing new life to mature basins, including Alaska’s Cook Inlet and the North Slope, and we have a clear understanding that an experienced local workforce is critical to success," said Jason Rebrook, president of Hilcorp Energy Co. and leader of Hilcorp’s transition team for this transaction.

Hilcorp’s pipeline company, Harvest Alaska, will take over BP’s 49 percent stake in the trans-Alaska pipeline and a similar share of the pipeline operator, Alyeska Service Company. Harvest will focus on “safety, the environment" and communities as it works with other companies on pipeline matters, said Sean Kolassa, president of Harvest Midstream.

Larry Persily, a former federal gas official for Alaska, said the impact on Alaska of the deal could largely be psychological at this point, serving as a reminder that the state’s best oil-producing days are long behind it. North Slope oil production today is about a fourth of its peak production of 2 million barrels daily in the late 1980s.

“BP has been here since the dawn of time,” he said. “For some people it’s a smack in the head that the North Slope is in decline.”

“If they perform like they’ve done in Cook Inlet, that would be good for Alaska,” Persily said.

Alaska Sen. Lisa Murkowski, chair of the Senate Energy and Natural Resources committee, thanked BP for its contributions to the state. She said she’s encouraged that Hilcorp “sees so much opportunity" in Alaska’s under-explored North Slope.

“Hilcorp has a strong record of hiring Alaskans and I hope they will continue and strengthen our record of responsible production on the North Slope,” she said.

Gov. Mike Dunleavy called the deal a “passing of the torch” and said his administration looks forward to learning more about future operational plans.

“We welcome Hilcorp to their next phase in Alaska operations and thank BP for their decades-long commitment in bringing Alaska’s mineral wealth to market," he said.

The deal will “vault” Hilcorp into the position of second largest Alaska producer, between leader ConocoPhillips and ExxonMobil, said Rowena Gunn, a Wood Mackenzie analyst.

BP’s 3-D seismic shoot this year could help prolong the life of the field, the consulting firm said.

Wood Mackenzie sees a slightly higher value in the assets than the purchase price would suggest, the company said. In other words, Hilcorp may have gotten a good deal. Hilcorp will also take over BP’s large share of the Liberty field, a big offshore prospect where Hilcorp is pursuing development.

Noting that BP has shifted its global focus to offshore fields and other assets, Gunn suggested that ExxonMobil may be the next major company to leave Alaska.

“This will not be the last deal in the region," Gunn said.