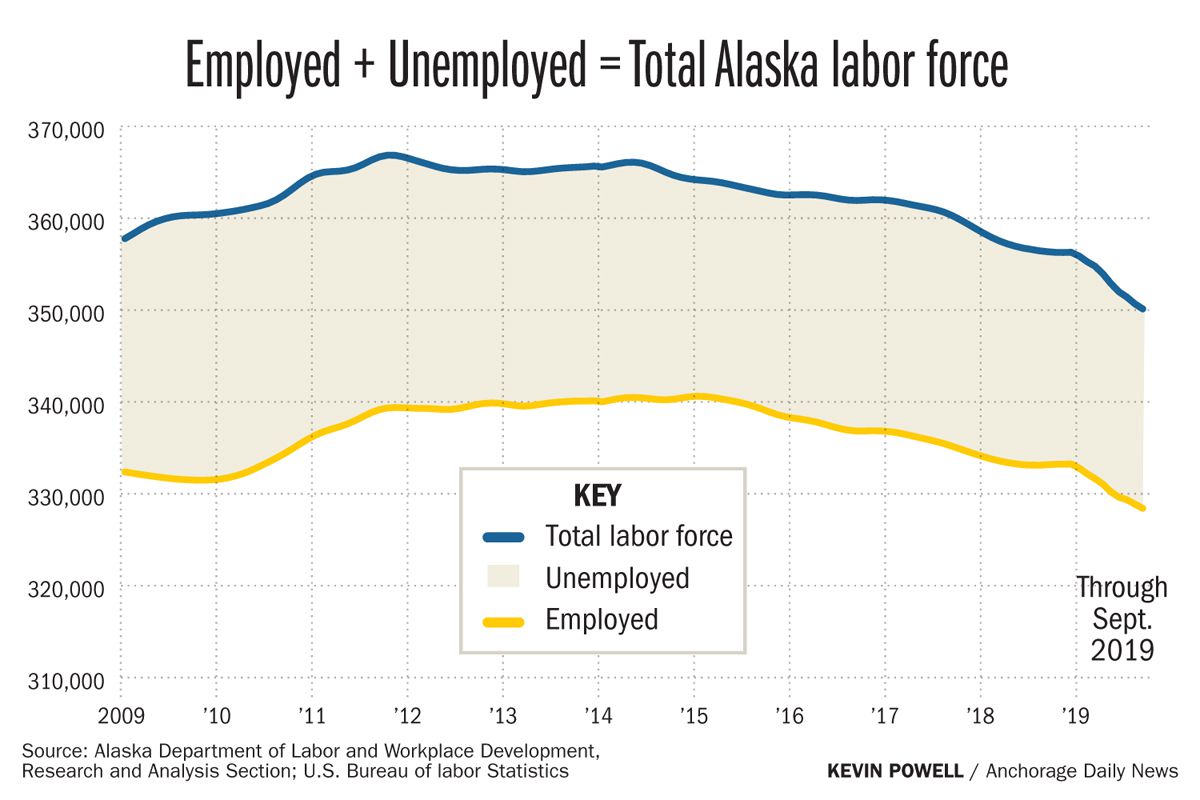 A key gauge of Alaska unemployment has dropped to a record low, even as state budget cuts hit the economy and thousands of jobs eliminated during the three-year recession haven’t been replaced.

Gov. Mike Dunleavy has touted the low numbers as a positive sign. Economists agree, but add that the data paints a complex picture that isn’t entirely good.

The recession ended this year, and jobs have grown modestly in Alaska for 12 straight months. Alaska’s seasonally adjusted unemployment rate dropped to 6.2% in August and September, preliminary figures show. If that holds, it will beat the 6.3% unemployment rate experienced in July and occasionally in previous years.

But here’s the catch: The number of people working and looking for work in Alaska has shrunk substantially since 2011. Some have left for opportunities in the thriving Lower 48, while others have stopped looking for jobs in Alaska because they’re discouraged, retiring or for other reasons, economists say.

"It’s a mixed bag,” said Lenon Weller, an economist with the Alaska Department of Labor and Workforce Development.

Yes, the seasonally adjusted unemployment rate is historically low, he said. But the diminished workforce could be a factor.

"It could indicate that there isn’t a lot of opportunity in the state,” he said.

Alaska has calculated its seasonally adjusted unemployment rate back to 1976. The figure is used as a yardstick to compare Alaska unemployment with other states, smoothing out seasonal hiring swings affected by summer fishing or other activity.

Weller explored the issue in a recent state report.

“The point is that the unemployment rate only tells part of the story; its components are just as important," Weller wrote. “In Alaska’s case, a shrinking labor force and relatively fewer people engaging in the labor force for multiple reasons, some of which aren’t yet clear, suggests we should be cautious about assuming the declining unemployment rate is a positive sign."

Theoretically, a smaller workforce has a greater burden for meeting the state’s needs, he wrote.

The governor last week cited the unemployment rate as one of many encouraging economic signs.

“Private investment is up, (gross domestic product) is up, personal income is up, and unemployment is down — these all point to an improving economy," he said.

Military projects, tourism and oil and gas activity have continued to drive “mild” but steady growth in jobs, the Labor Department said in a separate statement.

But Alaska unemployment remains the nation’s worst, above the U.S. seasonally adjusted average of 3.5%.

Alaska employment, at about 330,000 people, is roughly at 2010 levels. Thousands of jobs shed in the recession, sparked by falling oil prices in 2014, haven’t been recovered.

State government has 400 fewer workers than a year ago, following budget cuts including the governor’s vetoes of more than $200 million in August, which he said were needed to help close a giant deficit.

The effects of some budget cuts haven’t been fully felt, economists said.

One uncertainty is the impact the large cuts to Medicaid will have, said Mouhcine Guettabi, an economist with the Institute of Social and Economic Research at the University of Alaska Anchorage.

Guettabi tweeted Tuesday that the unemployment rate should tick up during a recovery, as more people return to the workforce.

“That has not happened,” he said.

During a recovery, you typically see upticks in the unemployment rate as people move back into the labor force. That has not happened.

The most pronounced drop occurred among young people, ages 16 to 19. They may be focused on getting college degrees before seeking employment, part of a national trend, Weller said. The labor force between 45 and 54 years old, a prime group, fell by nearly 11%, to 78,687.

“Certainly when you see the percent of individuals engaging in the labor force going down, that indicates there is some distress there, whether it’s a mismatch in skills, or an inability to work,” Weller said.

Now, the seasonally adjusted unemployment rate is lower than in the early 1980s, when growing North Slope oil production fueled a “red-hot” economy in Alaska, said Neal Fried, a state labor economist. At that time, the Lower 48 was in a recession.

The rate during those years hovered at 9% and higher. People were coming to Alaska from other states looking for work, boosting the labor pool — and unemployment. Not every newcomer could get work.

Since about 2012, more people left Alaska than arrived as the economy grew in the Lower 48, Fried said.

What’s left behind in Alaska is “not a bad” job market, though job growth has been mild, he said.

“You talk to a lot of employers, and it’s not that easy to find workers, and that’s been true for a little while,” Fried said.

“Long story short, it ultimately means far fewer people coming to Alaska looking for work than normal," said Fried. “Also, it probably means that a really hot labor market (in other states) is attracting some Alaskans."

“It is an odd phenomenon,” he said.