They shared a passion for reducing plastic waste. Now these two Anchorage women are opening a bulk-goods ‘refillery’ store. 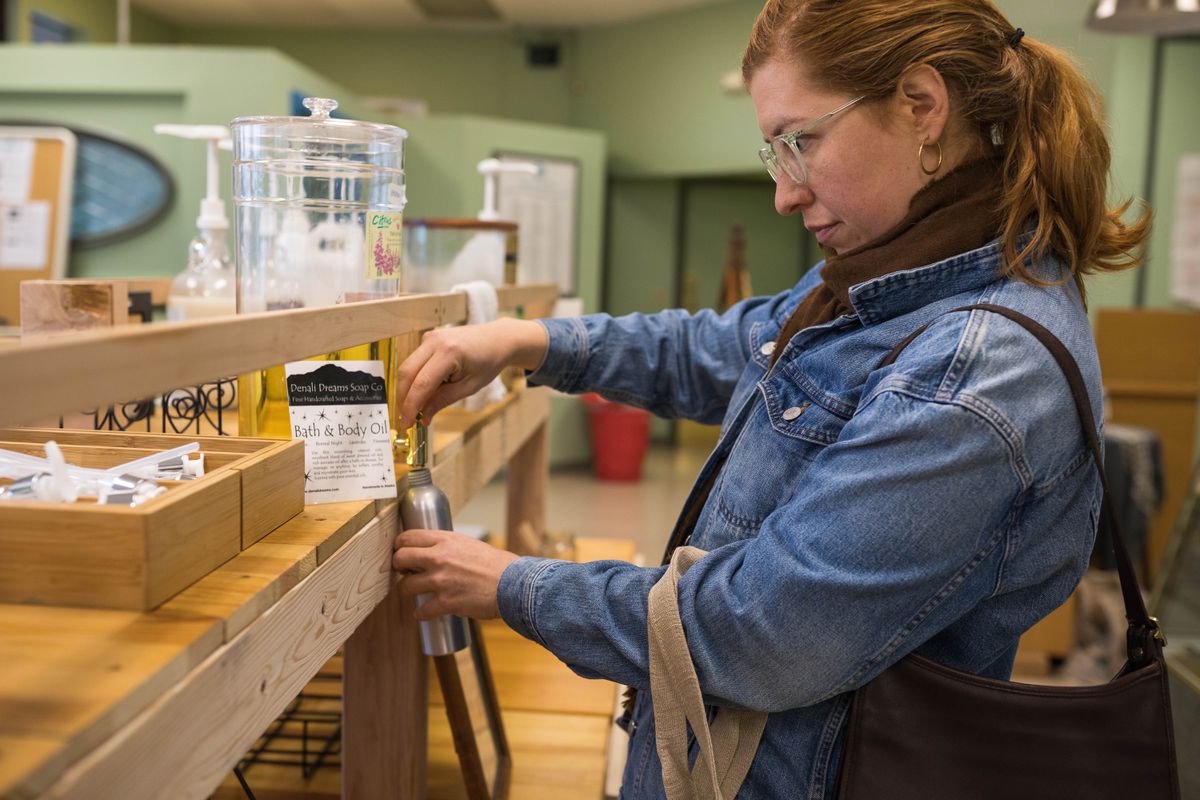 Appalled by the plastic trash piling up along roadsides and oceans worldwide, two Anchorage women will open an unusual store in Spenard this month.

There, customers can fill reusable containers with shampoo, soap, and other household items. The store will offer food products in the coming months.

Jennifer Gordon and Jess Johnson launched a version of their “unpackaged refillery” in August, from a farmer’s market cart lined with bulk dispensers. Patrons pumped products like bath and body oil or liquid cleaners into personal canisters.

The reception was "outstanding,” said Johnson. She said she found herself dashing home to grab sold-out supplies.

Their business, Blue Market AK, is somewhat similar to zero-waste stores in Europe and the Lower 48 that also seek to cut down on throw-away packaging.

With their farmer’s market venture this summer, the women aimed to raise awareness about waste-reducing ways to shop. They sold Alaska-made items, emphasizing the need to reduce imports arriving on jets and ships that add to planet-warming carbon emissions.

But they turned a small profit, and moved ahead with plans to open the storefront business. They recently raised $30,000 through online crowdfunding to supplement their own investment.

On Thursday, Gordon and Johnson were getting their new space ready in Anchorage’s Spenard neighborhood, in a building south of the Wells Fargo bank on Benson Boulevard. Occasional supporters arrived to pick up small gift packages, given in return for donating to the store’s online fundraiser.

“I just love what they’re doing,” said Corrina Rinella, an Anchorage mother, who dashed in during lunchtime to give a $150 check. She said she missed the online donation drive.

Rinella heard about the new business on the radio, and said it made her feel better about her community.

“What they’re doing is what I have tried to do personally, but it takes so much research and time, and I get discouraged,” Rinella said. “I just want to find laundry detergent that doesn’t fly here on a Costco pallet, so I’m really excited to see this.”

The store will hold a “soft opening” on Saturday, Nov. 9. It will sell non-food items until the “grand opening” in February, when fresh local vegetables, dried beans, pasta and other food will be available. The owners said the schedule will expand to at least five days a week from three.

Gordon and Johnson don’t want it to be a pricey gourmet store. They said selling unpackaged products will help cut costs.

“We want to say we are a convenience store, but that doesn’t sound right,” Gordon said.

“We are trying to make minimal waste convenient,” Johnson said.

But they want to keep trash out of the oceans. They said they’ve been encouraged by Anchorage’s plastic-bag ban.

Gordon said part of what inspired the business was an experience she had during a family sailing trip from Alaska to Mexico a few years ago. She was struck by all the litter she saw along the coast. Later, she went on a month-long, plastic-free challenge that she publicized on Facebook, and realized many people shared her concerns.

She and Johnson met after friends recognized their mutual interest in fighting waste and introduced them. Soon afterward, Johnson left her job as an attorney to open the store.

Now they’re trying to shift the shopping mindset to an earlier time, when milk bottles were cleaned and reused and when store owners scooped dried beans, rice and pasta from bins, Gordon said.

“That was all in place not that long ago, but these disposable plastics came in and the cultural knowledge just vanished," Gordon said.

The store will be like an expanded version of a bulk-food aisle at a grocery store.

Information about vendors and ingredients will be kept in a binder on site and eventually online. They’re working with companies to get items shipped without packaging, so most products won’t have labels.

The store will feature a “lending library” where customers can donate empty containers to be sanitized and used by others. It will also provide reusable shopping bags for those who forget them.

Gordon said the store will be an evolving work in progress, as they learn what customers want.

“We’re not a franchise that came with a book and guidelines,” she said. “We’re creating this from scratch.”