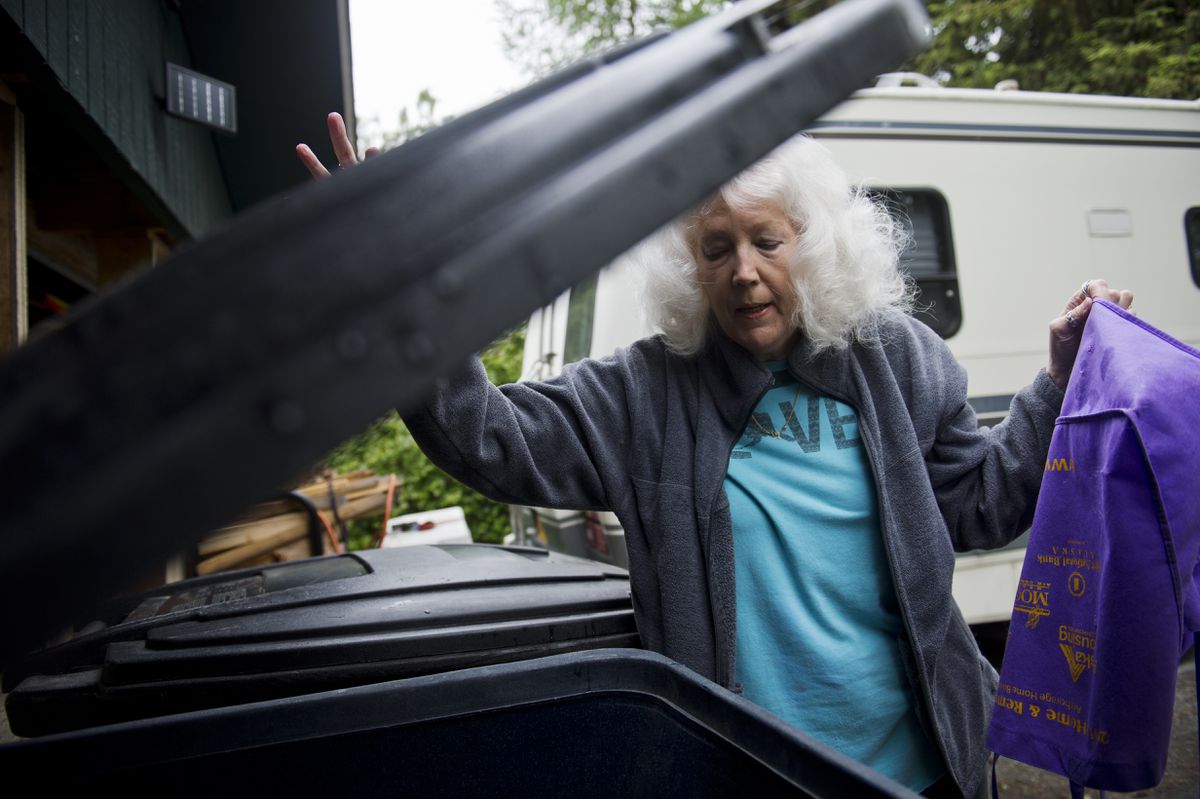 Michelle McCarten, who lives in the Turnagain neighborhood, said she has been recycling to limit her household’s waste since before curbside recycling was an option in Anchorage. Photographed on May 30, 2019. (Marc Lester / ADN)

Michelle McCarten, who lives in the Turnagain neighborhood, said she has been recycling to limit her household’s waste since before curbside recycling was an option in Anchorage. Photographed on May 30, 2019. (Marc Lester / ADN)

At her home in Turnagain, Michelle McCarten has spent years faithfully recycling her household items, washing out plastic containers, tearing tape off cardboard boxes and learning as she goes along.

When McCarten heard about China’s sweeping ban on American recyclables in the news, she got worried. She doesn’t want recycling programs to stop. But she fears there still isn’t enough information out there to help people do it.

“Confusion can stop people in their tracks,” McCarten said.

Recycling is a practice meant to extend the life of Alaska’s landfills and combat a steady pileup of global waste that is contaminating natural resources. In Anchorage, programs have morphed over the decades from dedicated volunteer endeavors to official programs run by waste companies. Program managers say they want to expand recycling to more households in the coming years.

Yet the actual act of recycling can lead to questions, anxiety and inadvertent mistakes, recyclers say.

A far-reaching 2018 Chinese ban on American recyclables doesn’t leave much room for error. Putting the wrong item in the bin hurts the value of recycling and strains the system overall, officials say. The China ban was in part spurred by the volume of trash and contaminated material in American recycling.

Here’s a 15-step guide to become a better recycler, from officials and people who do it often. Take an online quiz, Recycle Coach, to gauge your curbside recycling habits.

Not all plastics marked with a No. 1 or a No. 2 can be recycled. Plastic clamshell containers, the clear containers that hold salads and berries, and plastic cups for drinks are technically a No. 1 plastic. But those are made of a different resin than plastic bottles and jugs and are more difficult to recycle.

The same goes for plastic pill bottles with pop-off tops, which are technically No. 2 but not recyclable.

McCarten only recently learned that plastic cups shouldn’t be recycled in her curbside bin.

“I’m not going to use those anymore,” she said.

Recyclers should focus on No. 1 or No. 2 plastic bottles or jugs that have screw tops, said Mary Fisher, the executive director of Alaskans for Litter Prevention and Recycling.

Can’t find a number on the plastic? Not sure?

Throw it out, Fisher said.

2. Everyone should be recycling cardboard.

There’s a huge market for cardboard, the prices are relatively stable and a lot of it gets collected, Fisher said.

“Cardboard is king,” Fisher said. Recycle it as long as it doesn’t have a plastic or wax coating, such as waterproof boxes for mailing frozen fish.

If there’s a tiny bit of grease in a cardboard pizza box, it’s OK to go in recycling, Fisher said. Or rip off the top part if it’s clean. Throw out the box if there’s a lot of grease and food left inside.

3. Aluminum and steel cans and newspapers are also strong bets.

“If you don’t know what you’re doing, focus on high-values stuff,” Mears said.

It’s less convenient for the recycler. But self-sorting at recycling centers prevents a lot of problems and aids in broader recycling efforts, officials say.

Glass breaks in the curbside containers. The shards get trapped in the other pieces of recycling and ruin the load, so it has to be sorted out separately.

On its own, glass can be recycled locally in Alaska and used for construction projects.

Plastic bags and plastic bubble wrap can cause big problems with sorting equipment. Aluminium foil, meanwhile, is also very difficult to sort out with an automated machine, Fisher said.

There are at least two places to take these materials for recycling: The Anchorage Recycling Center at 6161 Rosewood St. and the Anchorage landfill at 15500 Eagle River Loop Road. They’re baled individually and shipped directly to manufacturers and recyclers.

McCarten has pieced together recycling information over the years by calling her trash hauler and asking questions. She suggested others do the same. The city is a good starting point for a phone call: 907-343-6250.

There’s also plenty of information online, though it’s impossible to list all the different types of products, Fisher said.

“When in doubt, throw it out,” Fisher said.

6. At best, mistakes devalue the load. At worst, they make it all go to the landfill. Try not to be that person.

A can of paint or a half-filled bottle of laundry detergent or dishwasher fluid can contaminate an entire truckload of recycling -- one to two tons’ worth -- and send it to the landfill. So do cooking oil and automotive oil.

Those are more extreme examples of mistakes that can damage the value of Anchorage recyclables. More commonly, a yogurt container marked No. 5 on the bottom might show up in a load of curbside recycling.

While it can be sorted out later in the Lower 48, that item strains the system and devalues the load, Fisher said.

The same goes for broken wine glasses, light bulbs and small metal items like nails or screws, or containers with a lot of food residue inside, according to Anchorage’s recycling guides.

7. Tape and staples are OK!

McCarten has been pulling tape off boxes for years. That’s appreciated but not necessary, Fisher said. Modern sorting equipment can handle tape.

The same goes for staples. Sorting equipment has evolved to the point of taking staples out, Fisher said.

8. Rinse containers that need it.

McCarten spends time rinsing out bottles and cans in her kitchen sink to make sure they’re clean.

Aggressively rinse out mayonnaise, peanut butter jars and other containers with food with soap and a sponge, said Suzanna Caldwell at Solid Waste Services. Rinse out and dry juice bottles and cans.

9. Don’t try to recycle cartons, including TetraPaks, or coffee cups.

A carton with the recycling symbol on it doesn’t necessarily mean the product is recyclable in Alaska. That extends to the square TetraPak cartons, which hold store-bought broth, soup or juice. The cartons have aluminum and plastic liners that can’t be easily recycled, according to Caldwell.

As a general rule, anything with two parts to it is not recyclable, Caldwell said. There are exceptions for staples, tape and labels. But coffee cups come with wax liners and aren’t recyclable, she said.

10. It’s OK to leave paper labels on bottles or cans.

As with tape and staples, modern sorting equipment can deal with labels, Fisher said.

It’s fine to keep the caps on for No. 1 and No. 2 plastic bottles and jars in curbside recycling, Caldwell said.

For glass bottles and jars, it’s best to get rid of the caps and lids, she said. Then take the glass to a recycling drop-off spot.

12. Avoid materials that aren’t easy to recycle, and reuse what you can.

Fisher sticks multiple heads of lettuce in a single reusable bag to avoid plastic bins that aren’t easily recycled. She buys apples individually, instead of Costco clamshell containers that hold a dozen apples at a time.

Will McBride, who lives on the Hillside, said he’s working on not buying plastic. Sometimes, for a camping trip, they need a case of plastic water bottles, he said.

McBride keeps cardboard and uses it to line the bed of his pickup.

“No one is perfect, we all have to live our lives,” Caldwell said. “But if you can at least try to eliminate things you don’t need, it’s just so helpful.”

13. Set up a system in your house to make it easy.

McBride set up a walk-in pantry with big Rubbermaid bins. Jeanine Firmin, in the Eagle River Valley, bought Fred Meyer bins and labeled each for the different types of recyclables.

At her house in Turnagain, McCarten has a purple reusable bag attached with magnets to her refrigerator, where she puts in mixed paper, plastics and cans.

14. Can’t put it in a bin? There are places to take some non-recyclables besides the landfill.

McBride takes Styrofoam peanuts to packaging stores, including a place on International Airport Road, he said.

“I couldn’t throw them away,” McBride says.

Batteries, electronics, refrigerants and other materials that are hazardous to dispose of in a landfill can go to Total Reclaim, an electronics recycling company, Fisher said. Some bulbs and batteries can be taken to Home Depot, Best Buy or Batteries Plus. Ink and toner cartridges can go to Cartridge World, Cartridge Connection, Office Depot or Best Buy. Take building materials to Habitat for Humanity’s ReStore, and construction or demolition debris to Central Recycling Services.

Anchorage’s landfill has a drop-off spot for household hazardous waste such as paint and chemical cleaners. Each person can drop off 40 pounds a day for free, Caldwell said. A lot of it gets thrown out at the landfill

Composting is also growing in Anchorage, through curbside programs and at drop-offs at the landfill and Central Transfer Station in Anchorage. At the drop-off points, leave fruit and vegetable scraps, coffee grounds and eggshells, but not yard trimmings, meat or bones, Caldwell said. (For customers of Solid Waste Services who have curbside composing, yard scraps and garden debris are OK.)

Donate clothing and household items, including plate and mugs, to the variety of thrift and charity stores around Anchorage.

Most people incorporate these trips into other errands, Fisher said.

“(We have to) do our due diligence to mitigate our waste footprint in the world,” Fisher said. “And it takes time, it takes effort, and it takes organization.”

McCarten, in Turnagain, started recycling even before curbside recycling was available.

But she said that to her, it was always worth the effort, and still is. She said it’s a learning experience aimed at doing the right thing.

“We just did it because it was for the good of Anchorage,” McCarten said. She added: “Anchorage is beautiful, and Alaska is beautiful. Who would want to fill up all those dump things with material that could be used, recycled?”

For more help: Try downloading an app called Recycle Coach, which can be found on the city website at muni.org/Departments/SWS/Pages/Recycling.aspx.

Editor’s note: This story has been updated to clarify that yard waste and garden scraps are accepted in curbside compost bins for customers of Solid Waste Services.