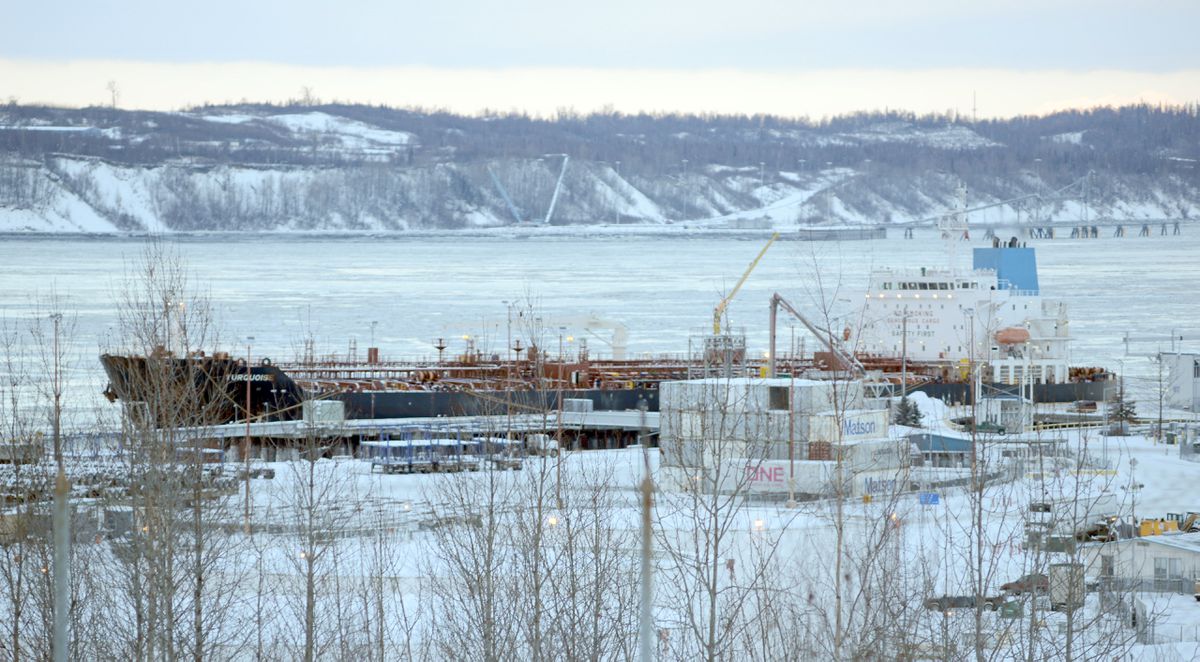 The tanker Turquoise is docked at the Port of Alaska Dec 27, 2019. The ship is headed to Daesan, South Korea after Anchorage. (Anne Raup / ADN)

The tanker Turquoise is docked at the Port of Alaska Dec 27, 2019. The ship is headed to Daesan, South Korea after Anchorage. (Anne Raup / ADN)

It’s a little more expensive for most companies to move fuel and cement across the docks at the Anchorage port.

The Anchorage Assembly approved new tariffs on the commodities on Dec. 17. While the import charges are regularly updated to account for inflation and operational costs at the port — renamed the Port of Alaska in 2017 — the latest tariff hike is significantly greater than normal in order to help fund construction of a new, roughly $200 million petroleum and cement terminal, or PCT.

The new PCT will be the first construction of new dock facilities at the aging port since 2010 when severe damage to installed sheet pile was discovered and the original port expansion project was halted. That project spent roughly $300 million of public money but left little to show for it.

No one disputes that the badly corroded docks at the port need to be overhauled or replaced, but representatives from fuel and cement companies that use the port have consistently argued against immediate major tariff increases throughout the nearly yearlong debate on the issue. They insisted changes should not be made to tariff rates until a construction and funding plan was again in place for the overall port modernization project, not just the PCT.

In February, city officials presented an analysis to the Anchorage Port Commission, an advisory board, that concluded current tariffs of 16.4 cents per barrel of fuel and $1.67 per ton of cement would need to be increased 500 to 600 percent over 10 years to fund PCT construction solely through higher tariffs.

The analysis was met with sticker shock by individuals from port user companies who said those increases would likely drive business away from the port and make it more difficult to recover the desired revenue for PCT construction.

Specifically, the 10-year tariff schedule would cover the debt service for revenue bonds the officials at the municipal-owned port would sell to fully fund construction sooner.

Municipal Manager Bill Falsey has said other fees the port levies could be raised to support PCT funding but there is a general goal to apply new or increased charges only to the port customers that will benefit from the new infrastructure.

The new tariff hikes approved unanimously by the Assembly are more gradual than those initially contemplated; charges on fuel will increase 4 to 5 cents per year to reach 56.3 cents per barrel by 2029. For cement, the final tariff will be $5.72 per ton in 2029. Port spokesman Jim Jager noted that the tariff increases for fuels and cement are equal on a per-ton basis.

The relatively more gradual tariff increases would provide debt service coverage for approximately $80 million in bonds to finish the PCT after city officials decided to put all of the funding left from the prior project and other available sources towards the terminal, rather than reserving some of it for other dock work.

Port officials also secured a $25 million development grant from the U.S. Department of Transportation in November for the PCT and the lone bid for 2020 construction came in about $20 million lower than expected.

The PCT should be finished in the fall of 2021 under the current construction schedule.

The PCT — which will be south of the current docks — needs to be built to free up space to build new cargo terminals while also allowing daily operations at the port to continue. Additionally, it needs to be done very soon so all of the port’s docks can be rebuilt before the existing infrastructure has to be closed for safety concerns, according to Falsey.

Engineering studies commissioned by port officials have concluded the corroding steel pilings that support the docks have roughly 10 years of working life left before they will not be able so safely support vessel operations at the port despite an ongoing $2 million per year program to patch the piles in the worst shape.