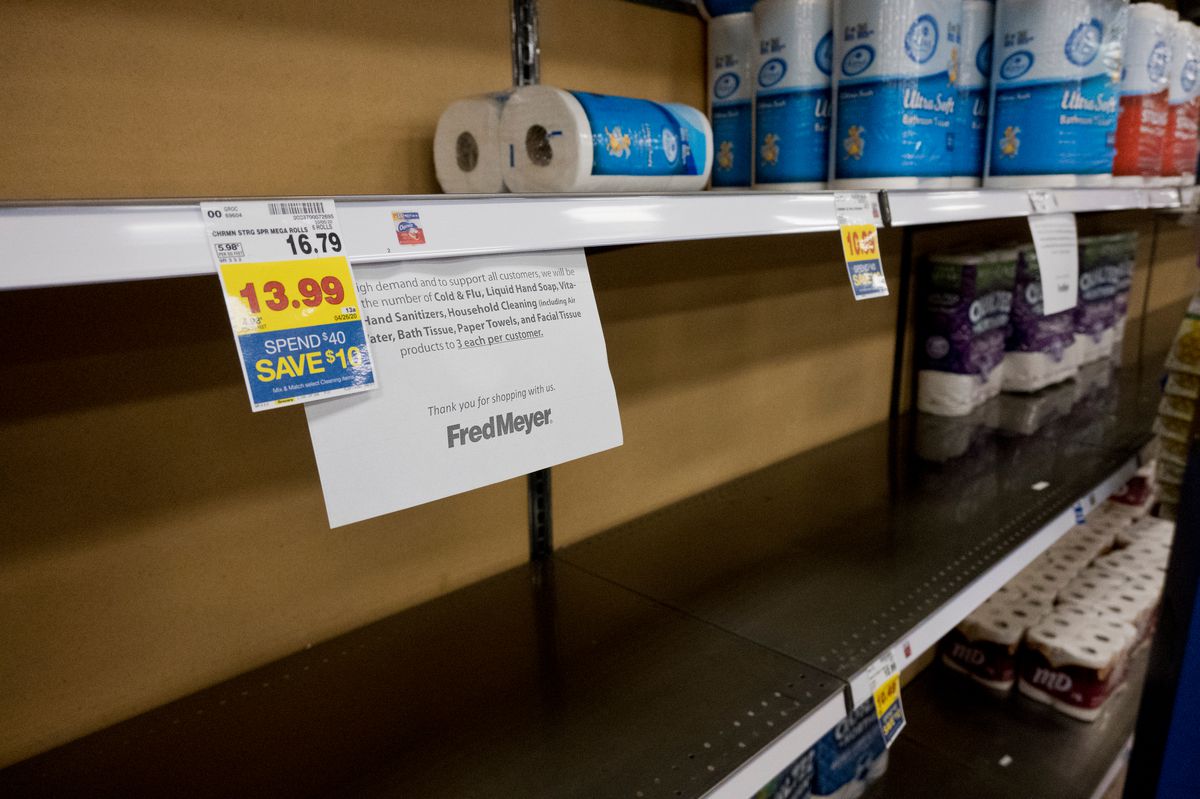 A sign in Fred Meyer in Midtown Anchorage explains the story policy limiting the quantity of certain products that customers can buy, including toilet paper, on March 13, 2020. (Marc Lester / ADN)

A sign in Fred Meyer in Midtown Anchorage explains the story policy limiting the quantity of certain products that customers can buy, including toilet paper, on March 13, 2020. (Marc Lester / ADN)

Grocery stores in Alaska are racing to keep up with surging demand for medicine, toilet paper and other home hygiene products amid the coronavirus emergency that could keep families mostly at home for weeks.

Aftin Dickey, a dental assistant, said she drove to four different retail outlets in Anchorage on Sunday before finding more than a travel-sized package of baby wipes for her 1-year-old son’s diaper rash.

She finally got what she needed at the Carrs on Gambell Street near downtown.

Federal, state and city leaders in recent days have declared emergencies, leading to closures in many places where large groups gather, including hundreds of public schools across Alaska through March. Three coronavirus cases have been announced in Alaska as of Monday night — one in Anchorage and two in Fairbanks.

[Alaska’s statewide school closure is beginning. No one knows quite how it will work.]

On Monday, Anchorage Mayor Ethan Berkowitz issued an emergency order prohibiting dine-in service for food or drink at restaurants, bars and breweries through March 31. The order also closes entertainment facilities such as theaters and gyms, and prohibits gatherings of 50 or more people.

The order added to the shopping frenzy at Costco on Monday, said Roy Olsen, a semi-retired painter.

“This is crazy,” Olsen said, standing in line more than 25 shopping carts from the cash register at the Costco in South Anchorage.

Customers behind him stretched nearly to the back of the store.

Olsen had planned to eat out for his 63rd birthday on Monday. He was picking up rice, coffee, paper towels and other items. Nothing unusual.

“I’ll be eating at home instead,” he said. “Hopefully this dies down with the flu season this spring.”

There will be “goods to purchase in our markets, in our stores,” he said. “So we don’t have to buy a large amount of items at one time.”

“We don’t have to shop in the manner that we’ve seen here in the last couple days," he said.

Officials with shipping companies Tote Maritime Alaska and Matson, which haul most groceries to the state through the Port of Alaska in Anchorage, said their container ships are arriving as scheduled and on time, twice weekly to Anchorage.

“The shelves being empty of some items has more to do with customer habits and purchasing related to COVID-19, and really nothing to do with operations or supply chains,” said Alex Hofeling, Tote Maritime Alaska general manager, referring to the disease caused by the new coronavirus.

Officials with Tote and Matson said they’re following federal guidelines to restrict the spread of the illness to crews, including requiring workers to self-report and self-isolate if they have fever or other symptoms. The ship’s master must report the illness to the U.S. Coast Guard.

The companies are working with port officials in Alaska and Tacoma, Washington, to ensure products move smoothly, officials said.

Tote has restricted crew time on shore in ports, to prevent workers from contracting the sickness from passersby, Hofeling said.

“We understand we are a virtual lifeline to Alaskans communities, from a consumer goods and pharmaceutical perspective, so we take this very seriously,” he said.

Matson said in a statement Monday that it can employ extra vessels, if needed, to ensure demand in Alaska is met.

“Matson is committed to taking all appropriate steps to ensure the continuation of services, including the deployment of reserve vessels if necessary to continue meeting the needs of our customers,” the company said.

“We have protocols in place to make sure crews stay healthy,” said Dylan Faber, community affairs manager with Matson.

Jeffery Temple, director of corporate affairs for grocer Fred Meyer in Alaska, said the extraordinary steps to keep people home have led to a sharp rise in shoppers.

“If you’re home more, you need more food and supplies," he said. “We are seeing that more now than ever.”

The 11 Fred Meyer stores in Alaska are hiring dozens of employees to help meet the jump in demand, he said.

Managers are in close contact to adjust orders as needed, he said. Fred Meyer stores in Alaska have limited purchases of cold and flu medicines, bottled water and other items, to three per customer.

“There’s no concern we’ll run out of items, so it’s just a matter of keeping up and making sure everything we do is streamlined,” Temple said.

The chain is working closely with suppliers to make sure alternative brands are available if other brands run out, said Sara Osborne, a spokeswoman with Carrs Safeway. Products reach most stores daily, she said. If the store is out of a product, it will likely have it restocked within one or two days.

“I need to stress that there is no shortage of food in the supply chain,” Osborne said in a prepared statement. “Suppliers have plenty of the essential food, medicines, and goods that all our communities need.”

Managers at the South Anchorage Costco at one point early Monday allowed 10 customers in at a time to help control shopping, they said.

Around noon, Daniel Schwab, a door checker at the store, said he counted more than 300 customers entering every half-hour.

Ryan Morse, a manager at the Costco, said it was one of the busiest days he’s seen.

“The earthquake (in November 2018) was a wake-up call, so people are being a little extra prepared this time,” he said.

As he spoke, a customer asked for toilet paper. It had already sold out. “This is so crazy,” she said.

Morse said the store is restocking items as quickly as possible.

As soon as products arrive from cargo ships, they’re put on the shelves, he said.

By noon, the few remaining pallets of liquid hand soap at the Costco were going fast, judging by the tower of empty boxes. Customers said hand sanitizer was also sold out.

Warren Hill, a small business owner visiting from Port Alsworth in Southwest Alaska, said the Costco was out of the frozen broccoli and other vegetables he had hoped to buy for neighbors in the town of about 150.

“This is insane," he said. “If this keeps up, it’s going to be hard on rural Alaskans."

Darlene Castner, placing paper towels into the back of her car, said she had come to Costco to buy food for elderly friends who are staying home to avoid the illness. COVID-19 has disproportionately afflicted older people.

Her friends needed coffee, fresh meat and bottled water, among other items, she said.

“It’s crowded in there, but everyone was very polite,” she said. “Hopefully this virus is bringing people together.”