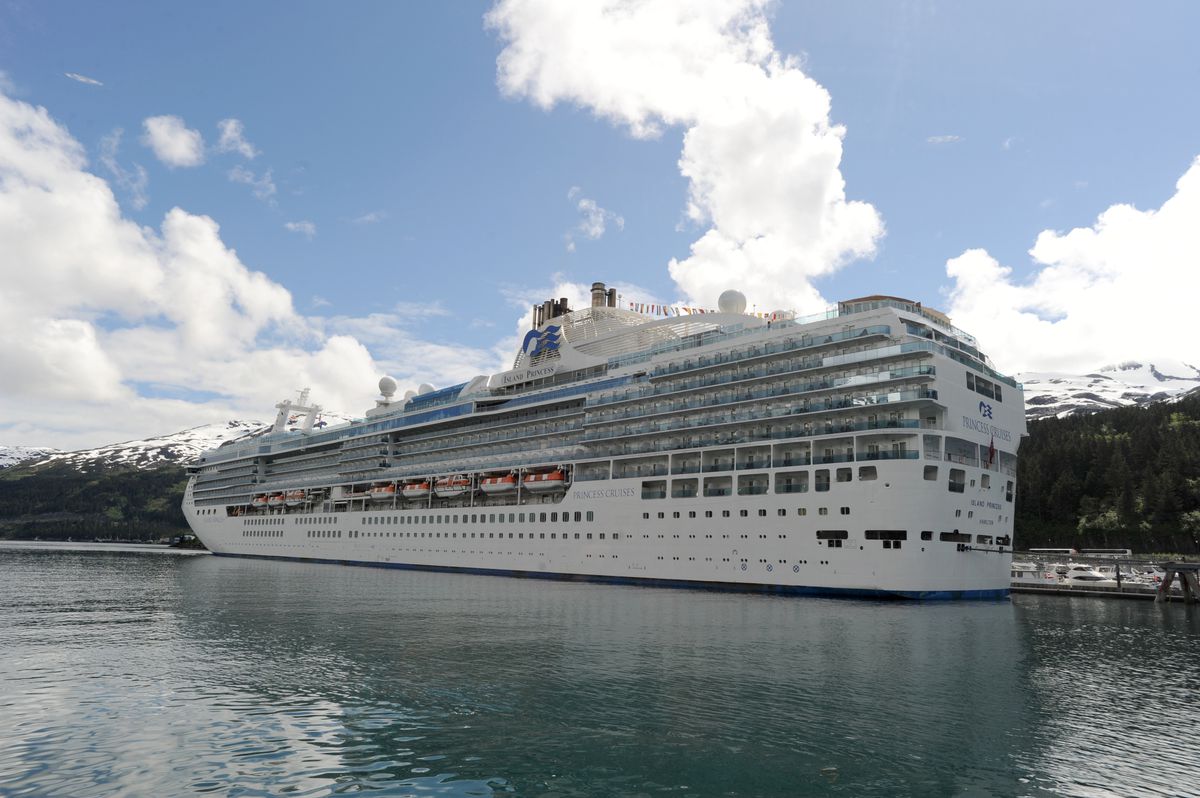 The Island Princess was docked at Whittier Thursday, June 13 , 2019. The community is not expected to get any cruise ships this season. (Anne Raup / ADN)

The Island Princess was docked at Whittier Thursday, June 13 , 2019. The community is not expected to get any cruise ships this season. (Anne Raup / ADN)

In another blow to Alaska’s struggling economy, Princess Cruises and Holland America Line are canceling Gulf of Alaska sailings for the entire season as the cruise industry grapples with the coronavirus pandemic.

The Carnival-owned lines are the state’s biggest cruise ship operators. Both companies announced the cancellations Tuesday along with broader sailing delays fleetwide until July.

About half the cruise voyages in Alaska this year have been canceled, including 175 involved in Tuesday’s announcement.

Holland America has also canceled this season’s land excursions into Denali National Park and the Yukon. The company operates Westmark hotels in Fairbanks and Anchorage.

Industry observers were expecting the biggest cruise season yet this year before the pandemic hit.

The announcement “is devastating not just to the hundreds of businesses that rely on cruise passengers for their livelihoods, but the communities that receive a large portion of their revenue from visitor taxes and fees,” Alaska Travel Industry Association President and CEO Sarah Leonard said in a statement.

Last year, Alaska’s visitor industry supported more than 52,000 jobs and created more than $4.5 billion in economic activity for Alaska, according to the association. Leonard said Tuesday’s announcement makes state and federal assistance for the state’s tourism businesses “all the more imperative.”

More than a million out-of-state tourists come to Alaska on cruise ships every year — more than by any other form of transportation.

Passengers on day excursions pour into jewelry stores, gift shops and restaurants around the state. They charter flightseeing trips and glacier cruises. From Seward and Whittier, they’re bused or take the train to Anchorage, where they stay in hotels, eat out and maybe travel farther north to Talkeetna, Denali and Fairbanks.

Princess officials say they hope two vessels — Emerald Princess and Ruby Princess — will be able to sail later this summer round-trip to Southeast Alaska from Seattle.

Holland America officials said the company hopes two vessels -- Koningsdam and Eurodam -- will be able to offer round-trip cruises from Seattle and Vancouver for part of the summer.

“We will continue to assess these plans over the next several weeks,” Holland American spokesman Erik Elvejord said in an email Wednesday.

No cruise ships will call at Whittier and a large part of Seward’s cruise traffic will be gone, industry officials say.

There are now more than 601,000 fewer passengers cruising to Alaska this season, according to Cruise Lines International Association Alaska. That includes 126,000 canceled round-trips in Southeast Alaska, 246,000 others already canceled and Tuesday’s cancellations of 228,364 in Whittier and Seward.

The state estimates each cruise passenger spends $624 in Alaska on average, according to the association.

That’s an estimated $375 million that won’t be spent here this summer.

The cancellations will also cause a direct loss of thousands of jobs, company officials said.

“We deeply regret that we will not be able to employ the approximately 3,500 teammates who help show our guests the Great Land each summer,” Princess President Jan Swartz said in a YouTube video posted Tuesday.

“Our thoughts are also with all of our small business partners throughout Alaska who we have supported every summer for decades,” Swartz said. “We know these decisions will have a large adverse economic impact on the state of Alaska which relies on tourism.”

Nationally, the cruise industry shut down about a month ago amid the rising toll of the new coronavirus that causes the infectious disease known as COVID-19. Last week, the Centers for Disease Control and Prevention extended a “no-sail order” for 100 days.

The virus has sickened hundreds of cruise ship passengers and stranded thousands -- including some Alaskans -- as well as infecting and isolating crew members. Dozens on cruise ships have died.

“Our outlook for a restart of travel continues to slip further into summer,” Princess spokeswoman Negin Kamali said in an email. “This, combined with the reality of our short Alaska operating season, has forced us to make the extremely difficult decision to cancel our 2020 Alaska gulf cruise and cruisetour programs.”

Some communities, like Fairbanks, aren’t located on saltwater but still rely on the summer surge of cruise traffic. The cruise lines advertise sternwheeler tours and gold mines as well as flights to the Arctic Circle and Yukon River.

The “cross-Gulf” cruises canceled this week generally start in Vancouver and end in Seward or Whittier, but passengers can book land tours to Denali National Park or Fairbanks.

The organization gets 86% of its budget from reinvested hotel and motel taxes taking a hit because of the virus, Hickok said. The organization laid off employees and cut its $4.2 million budget to $2.9 million -- just below the level of the state’s 2009 recession.

A 2016 study found land tours make up more than 40% of summer business in Fairbanks, Hickok said. “We know it’s over 150,000 visitors. What the exact portion of that is Holland and Princess I don’t know. But I can tell you the majority for sure.”

Chris Byrd grew up in Talkeetna and now owns the Swiss Alaska Inn, a 21-room hotel and restaurant that opened in 1976. He’s getting numerous calls a day from cruise passengers canceling room reservations.

Byrd voiced a hope shared by many in the tourism industry here: Once Alaskans can start leaving home again, they’ll be the first wave of visitors helping to rebuild the state’s tourist economy.

But even that isn’t certain, Byrd said.

“With the way the economy is going, oilfields shutting down, you don’t know what to expect,” he said. “Typically when tourism season isn’t great you’re hoping the oil fields are running and vice versa. Both of them being down at the same time is really not helpful for the state for sure.”