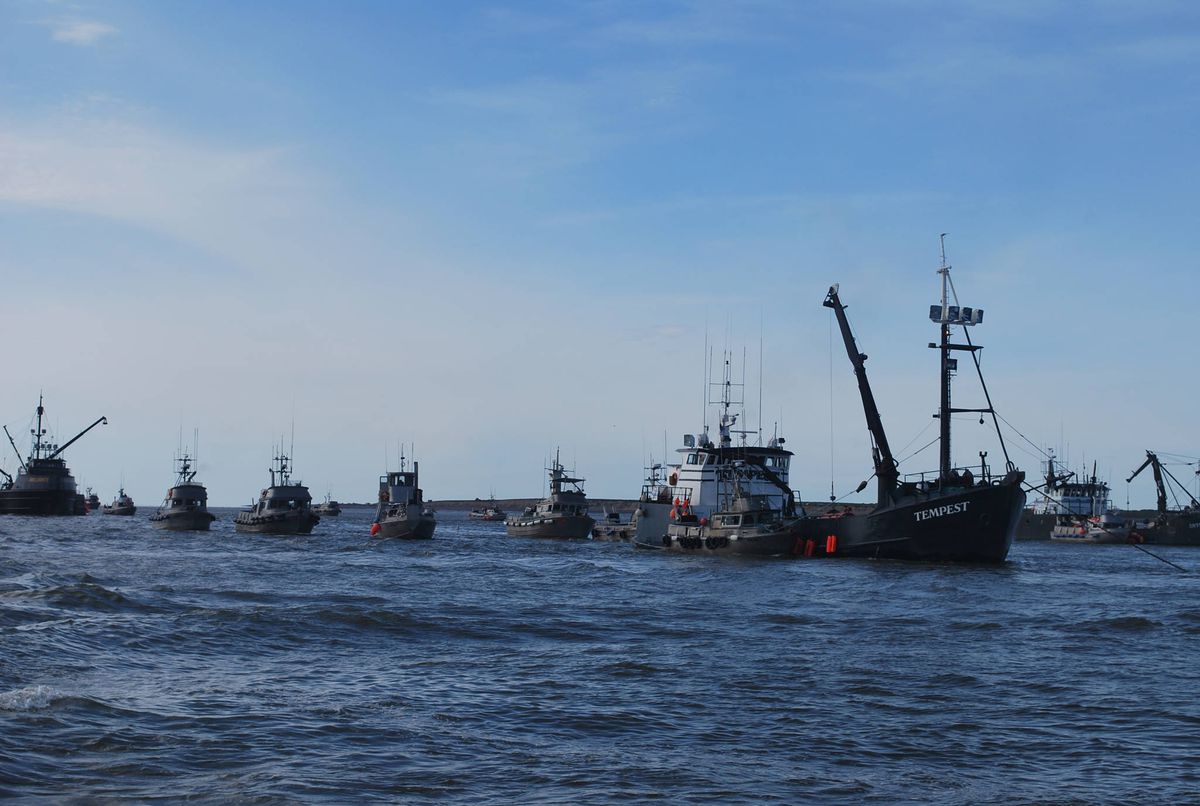 With the Copper River salmon season set to start next month and the massive Bristol Bay fishery in June, the commissioner of the Department of Fish and Game says plans are in the works to harvest fish and keep communities safe. (Alaska Journal of Commerce)

With the Copper River salmon season set to start next month and the massive Bristol Bay fishery in June, the commissioner of the Department of Fish and Game says plans are in the works to harvest fish and keep communities safe. (Alaska Journal of Commerce)

State fisheries managers insist it is too early to close commercial salmon fisheries to prevent the spread of COVID-19 despite growing concerns from many in small communities about the coming influx of seasonal workers.

Alaska Department of Fish and Game Commissioner Doug Vincent-Lang said in an interview that he is certainly aware of the issues that could arise from holding spring and summer salmon fisheries that start next month as everyone also attempts to limit the spread of the disease, but he stressed state officials are drafting plans to provide extra protection to local residents and fisheries workers.

He also noted that salmon is just one sector of the state’s diverse and year-round fishing industry.

“I think people are wondering whether we’re going to have fisheries; I think they forget that we actually have a lot of fisheries in the water right now and we’re geared up to manage those,” Vincent-Lang said.

Commercial and charter fishing have been deemed essential industries by state officials through the COVID-19 travel and work restrictions, meaning they can continue as long as participants submit operating plans to the state Commerce Department that adhere to current health mandates.

Those ongoing fisheries “have been operating fairly smoothly,” he said, and ADFG managers are learning a lot about the daily operations of a fishery in the era of social distancing and travel restrictions that can be applied to the upcoming salmon seasons.

“We’re learning how to be adaptive,” Vincent-Lang said.

For example, managers are using new ways to sign fish tickets that verify catches and take biological samples used for management from harvested fish, according to Vincent-Lang.

In Cordova, home to the state’s first large-scale salmon fishery each year in mid-May at the mouth of the nearby Copper River, residents have started a KEEP CORDOVA SAFE website, containing numerous open letters to local and state officials demanding further travel restrictions for fisheries workers and suggesting only local fishermen be allowed to fish, among other measures.

The leaders of 11 Bristol Bay processing companies followed up with an April 7 letter to regional leaders outlining their strategies for safe operations this summer in what has been a $300 million fishery in recent years.

Vincent-Lang said the department is ready for the Copper River chinook and sockeye season and the first opener will be around May 14 with normal adjustments for weather and water conditions.

“We’re expecting a fairly high participation rate in that fishery,” he said.

Cordova Mayor Clay Koplin said in a prior interview with the Journal that processor companies have submitted detailed plans to the city for managing their crews this summer and some include bringing additional medical personnel to Cordova.

As for Bristol Bay, where fishing starts in June and typically peaks in early July, Vincent-Lang said he has seen several plans from processors there as well.

Processors are protecting public health by also making quarantines mandatory for their workers upon arrival on top of state and local government mandates as well as keeping them “on campus” throughout the season to limit interaction with local residents.

“What I’m doing is telling local community leaders to be is patient; this is working its way through,” Vincent-Lang said. “We’re learning things as we conduct fisheries right now and it’s premature to make a decision to close those fisheries at this point. As we gear up we’ll be sharing our plans with you to understand what we’re doing to protect public health in those areas.”

Bristol Bay Borough Mayor Dan O’Hara said he and other officials from area fishing groups and local governments have participated in teleconferences with Seattle-area processors and state officials in recent days to more closely coordinate operations this summer.

O’Hara said the Bristol Bay Borough, which covers the communities of Naknek and King Salmon and receives more than $4.5 million in fish landing taxes each year, is not interested in closing down the salmon fishery this year. He also said it is too soon to take such a big step.

Instead, “there’s nobody coming off the water to the mainland” at Naknek’s docks, O’Hara said as long as current state work, travel and distancing mandates persist.

He said the borough assembly passed a resolution in April restricting travel into its communities beyond the governor’s health mandates but borough leaders were later informed by the governor’s office they did not have the authority to do so.

Exactly what authorities local governments have to restrict travel and other specific activities during the ongoing public health emergency is also being worked out statewide.

“We don’t need to be stepping around him,” O’Hara said of Dunleavy’s orders.

As of April 14, Bristol Bay Borough administrators had received seven plans from processors, according to O’Hara.

“They plan on either chartering in (workers) and being tested before they get here and just getting on the bus and going straight down to the processing plant, shutting the campus completely down and they’ll not come out of there until the fishing season’s over, and I think that’s a good plan,” he said.

“As mayor I’d prefer that nobody comes here prior to May 15 but we already have 400-500 people here and they’re of course following the quarantine.”

The Bristol Bay Borough will maintain the restrictions it can at least until public health officials have a better handle on the virus, according to O’Hara. If the situation improves, mandates could be lifted.

Managers also must consider what not having a fishery could mean for future runs. Nearly 50 million sockeye are expected to return to Bristol Bay rivers this summer and not catching the vast majority of them would make for salmon escapements that would far exceed the goals for each river.

At a high level, managers typically try to allow sufficient numbers of fish to escape and spawn to generate the highest return based on historic data and scientific modeling. Allowing additional salmon to escape harvest and spawn can increase competition for food among juvenile salmon rearing in freshwater and reduce the productivity of future runs.

“We don’t want to damage the long-term health of those ecosystems in terms of fish reproduction, but second of all it provides a significant economic boost to that local community in terms of income to fishermen and income to the local community,” Vincent-Lang said, while also stressing that accounting for those considerations will not come at the expense of public health.

“We’re not going to just harvest fish and put the local health at risk.”