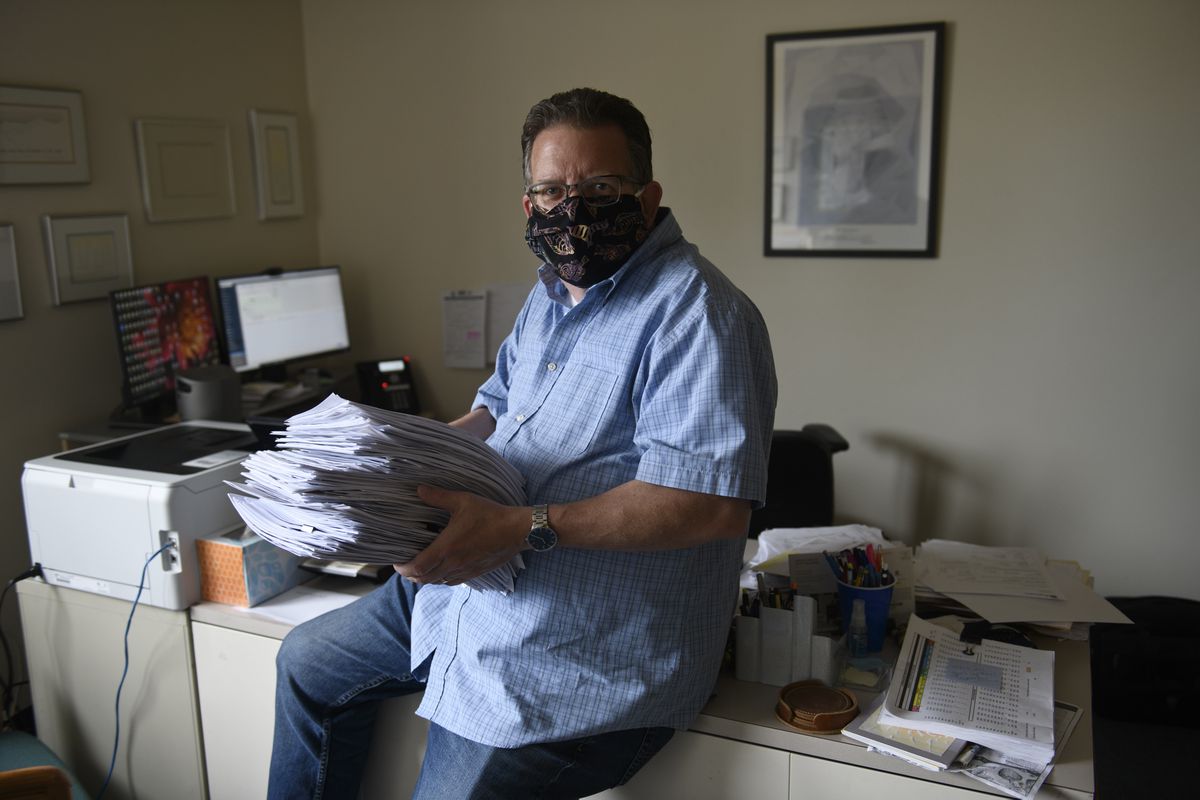 Alan Budahl, executive director of Lutheran Social Services of Alaska, holds about 2 1/2 days' worth of rental and mortgage assistance applications that have been processed through an economic relief program, funded by the city and using federal CARES Act money, for people who lost work due to COVID-19. Budahl said LSSA schedules about 60 appointments a day for applicants. (Marc Lester / ADN)

Alan Budahl, executive director of Lutheran Social Services of Alaska, holds about 2 1/2 days' worth of rental and mortgage assistance applications that have been processed through an economic relief program, funded by the city and using federal CARES Act money, for people who lost work due to COVID-19. Budahl said LSSA schedules about 60 appointments a day for applicants. (Marc Lester / ADN)

For 20 years, Brandy Harmon went to the same job. She is a banquet server working in Anchorage’s convention centers.

But in March, all events were canceled due to the COVID-19 pandemic. Harmon hasn’t had work since.

Now, she and her 9-year-old son are getting by on a safety net of social services she’s never had to depend on before, like a food pantry and a rental assistance program set up by the Municipality of Anchorage.

And after about a month without work, Harmon was approved for unemployment. The idea of accepting assistance was strange for her.

“I’ve always worked, I’ve always done what I’m supposed to do and I raise my kid by myself,” Harmon said.

Harmon, like more than 65,000 other Alaskans, has benefited from a special $600 weekly federal boost to help unemployed Americans during the pandemic. With unemployment, Harmon said she has about the same income as she did when working, so she’s been able to pay her bills and rent so far. But she’s worried about the future.

[Alaska’s unemployment rate improved in May, but COVID-19′s economic impacts are far from over]

The $600 weekly federal supplement to unemployment, responsible for pumping millions of dollars into the Alaska economy every week, is slated to end in the state July 25, Department of Labor and Workforce Development Commissioner Tamika Ledbetter said in a briefing Tuesday.

Harmon said she started using the food pantry to stock up on canned goods to last her and her son through the fall if the federal unemployment benefits expire. Factoring in the $992 Alaska Permanent Fund dividend to be dispersed in July, she said she could probably make it another few months. If she doesn’t get work again, she won’t be all right, she said.

“I’m OK now, but what happens in August?” she said. “So now I am trying to make sure I am OK up through, like, December.”

Economists warn that without an extension or some form of replacement aid, thousands of Alaska households will suffer, ushering in waves of hardship for families and businesses statewide.

Congress is discussing ideas to replace some of the income amid concerns, particularly among Republicans, that the current federal supplement is so large that it’s keeping some people from returning to work.

It’s unknown what will happen, said Lennon Weller, an economist with Alaska Department of Labor and Workforce Development.

“That is kind of the million-dollar question right now,” Weller said.

A record 66,500 Alaska workers, or about 19% of the workforce, received unemployment checks for the week ending June 13, Weller said.

The $600 weekly supplement, created by Congress in March, enhances Alaska’s traditional average payment of about $250, he said. The bonus injected about $40 million into the Alaska economy in one week.

“That is helping to keep what employment is left in the economy actually there,” Weller said. “If that support goes away, we’ll probably see another bump in unemployment and in claims.”

If more support doesn’t come, the effects could be widespread, experts say.

Terry Fields, head of the Weidner Property Management and Real Estate program at the University of Alaska Anchorage, said the extra aid and other state and federal benefits have stabilized the rental market.

But without continued support, many Alaskans will no longer be able to pay bills, he said.

Without continued support, Alaskans’ ability to cover car loans, insurance, groceries and medical supplies will all suffer, he said.

“If it isn’t done, you’ll see pretty serious effects and contraction of the economy,” Klouda said.

Alaska lawmakers are among the leaders in Congress who suggest that continuing the benefits as-is has drawbacks.

Sen. Lisa Murkowski said Congress needs to focus on ensuring that unemployment benefits are available for Alaskans who have truly relied on it as a lifeline, she said.

“As the economy begins to recover and businesses reopen, we want to make sure that we don’t create disincentives to return to work,” Murkowski said. “There are innovative ideas that are being discussed now to support returning to work, and I am engaged in those conversations and listening to Alaskans.”

House Democrats have voted to extend the $600 payment through January. Republicans have considered other ideas, including a back-to-work bonus.

Rep. Don Young’s office said the lawmaker has frequently heard from business owners in Alaska who are having trouble finding workers.

“It is no coincidence that people aren’t returning to work if they can make more through expanded UI benefits, which create a disincentive for them to jump back into the workforce,” said Zack Brown, a spokesman for Young. “The congressman will review any future proposals, but is focused on returning people to work and getting the economy back on track.”

Sen. Dan Sullivan and “colleagues are engaging in discussions with the White House as it relates to proposals surrounding unemployment insurance, return to work bonuses, and other proposals,” spokesman Mike Anderson said in an email.

Alan Budahl is the executive director for Lutheran Social Services of Alaska, which screens applications and cuts checks for the rental assistance program that’s helped Harmon.

He said people like Harmon, who have never previously relied on these sorts of social services, have become common visitors to his office.

“This is the first time they’ve ever experienced this, and they really didn’t know how to navigate the network,” Budahl said.

He said even though they are now out of work, many Alaskans still don’t think they qualify for financial assistance because they’ve always had steady income in the past. He’s had to explain that now, with no income, they do qualify, and walk them through the various programs.

[As virus roars back in US, so do signs of a new round of layoffs]

“Some are paralyzed, and several have used that word,” Budahl said. “It’s the fear, the anxiety, the uncertainty, that all this brings.”

On July 1, Alaska courts can again start holding hearings in eviction proceedings. Budahl said most of the people coming in seeking rental assistance are already a month behind on their rent, and some are several months behind.

While the state could extend the moratorium on eviction proceedings, that would only delay the date the bill is due, meanwhile the amount owed in back rent only grows.

An eviction, Budahl said, will haunt people for years as they seek new housing. These people have to find a way to pay their rent.

“People are going to have some really tough decisions to make,” he said.

On Thursday, he recalled a single mother raising an autistic son who came in to get help with rent.

After, the woman asked if she could take a moment before leaving.

“She just broke down and wept,” Budahl said. “A lot of people, when you hand them the check they say, ‘I could cry, I could cry.' And some people do.”

Editor’s note: This story has been updated to clarify that while the supplemental $600 weekly unemployment benefits will officially end July 31 nationwide, the state of Alaska — like most other states — will only pay out that benefit through the week ending July 25.