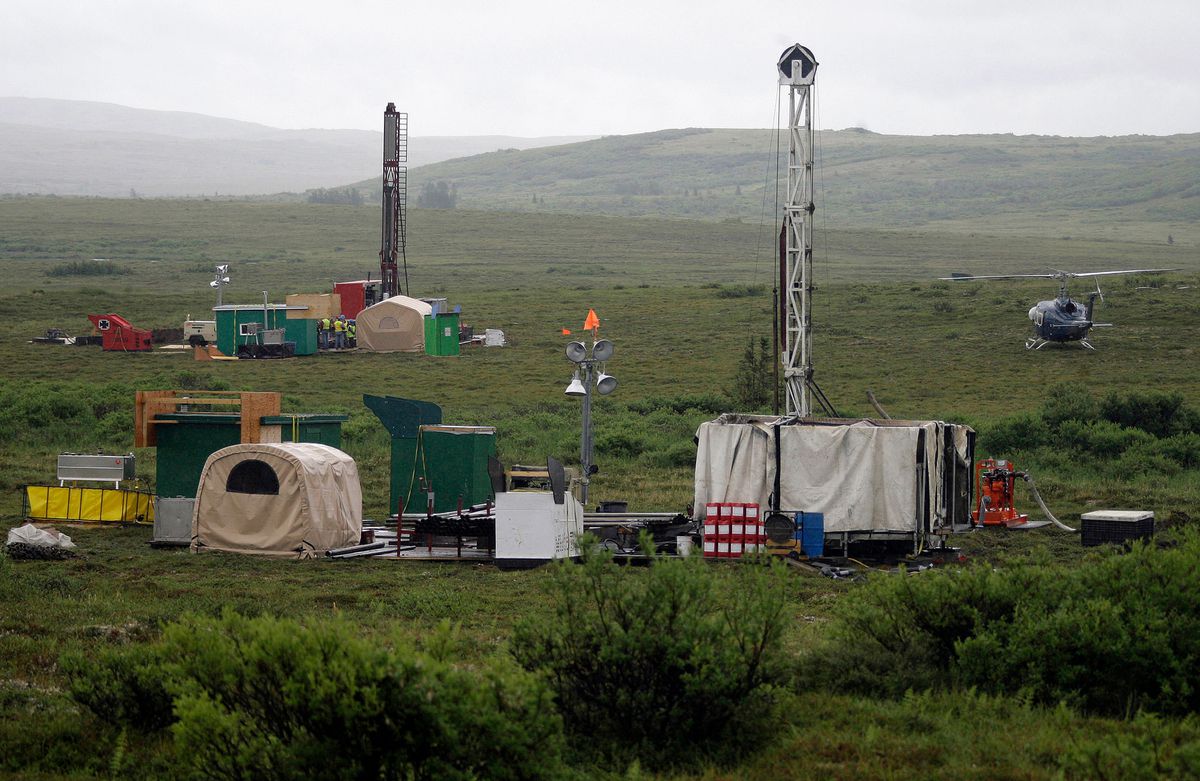 Workers with the Pebble mine project test drill in the Bristol Bay region of Alaska, near the village of Iliamna, in 2007. The Pebble Limited Partnership wants to build a copper and gold mine near the headwaters of a major U.S. salmon fishery in Southwest Alaska. (AP Photo/Al Grillo, File)

Workers with the Pebble mine project test drill in the Bristol Bay region of Alaska, near the village of Iliamna, in 2007. The Pebble Limited Partnership wants to build a copper and gold mine near the headwaters of a major U.S. salmon fishery in Southwest Alaska. (AP Photo/Al Grillo, File)

The Trump administration on Friday released a final environmental review of the proposed Pebble copper and gold mine in Southwest Alaska that smooths the path for the mine’s potential development.

The report found that the mine should not hurt the long-term health of the valuable Bristol Bay salmon fishery, or significantly impact salmon returns, a conclusion that tribal, fishing and conservation groups swiftly condemned.

The U.S. Army Corps of Engineers prepared the final environmental impact statement as as part of a two-year review process.

The analysis contradicts a 2014 report under President Barack Obama that found the mine would severely damage the Bristol Bay watershed.

Mine developer Pebble Limited Partnership praised Friday’s report as a milestone that sets the stage for the project’s development.

“I think this is the single most significant day in the history of the Pebble project,” said Tom Collier, chief executive of Pebble Limited, on Friday. “On the issue of fish, it unequivocally and repeatedly says there will be no significant damage.”

The open-pit mine would be built near the headwaters of salmon-producing rivers that support the Bristol Bay fishery, about 200 miles southwest of Anchorage. Major facilities would include a gas pipeline across Cook Inlet, a port site at the inlet, an 80-mile road to the mine site and a 270-megawatt power plant.

The entire mine site, including dams to store waste rock, would extend 13 square miles. About 70 million tons of rock would be mined annually.

Pebble Limited has said the prospect could become one of the largest copper and gold mines in the U.S., annually producing 318 million pounds of copper and 362,000 ounces of gold for 20 years.

At current prices, the gross value of those metals are worth about $1.6 billion annually. Collier has indicated the project would not be profitable in the first several years of production, until development costs are repaid.

The environmental analysis allows the Corps, in at least 30 days, to issue a permit needed to build the mine under the Clean Water Act, allowing damage to wetlands and streams in the area.

The Corps could also reject Pebble’s application, or issue a permit with modifications.

Approval of that permit, and two others from the U.S. Coast Guard and Bureau of Safety and Environmental Enforcement, would conclude the federal permitting process. Obtaining state permits could take three years, Pebble has said. Construction over four years would follow those state reviews, Pebble said.

Gov. Mike Dunleavy’s office said in a written statement that the state will provide a thorough, fact-based analysis to determine whether the project meets its environmental standards.

“Today’s release of the final environmental impact statement by the U.S. Army Corps of Engineers is only one step in a lengthy and complex regulatory process that will take place before any final determinations are made on the proposed Pebble project,” the governor’s office said.

U.S. Sen. Dan Sullivan said the project needs a rigorous, science-based review to ensure salmon aren’t traded for minerals, according to a statement from his office.

“This is a high bar,” Sullivan said. “In the coming days, my staff and I will be reviewing this document to see if the Army Corps has adequately addressed the comments and concerns raised by Alaskans and federal environmental and resource management agencies related to impacts and risks” to fisheries, the environment and subsistence resources.

U.S. Sen. Lisa Murkowski said the release of the report does not indicate the project will be approved or not. She said the project has high standards to meet to protect Bristol Bay.

“As I begin to review the document, I will continue to engage with both agency officials and stakeholders to hear all perspectives about the project and its anticipated impacts,” Murkowski said. “As I have repeatedly said, and included in my appropriations report language, adverse impacts to Alaska’s world-class salmon fishery and to the ecosystem of Bristol Bay are unacceptable.”

Now that the review is complete, U.S. Rep. Don Young will closely analyze the document with Alaska’s interests in mind, his office said.

Mining at Pebble would begin during the construction phase, and continue for 20 years during the operational phase, the Corps’ report said in a 119-page executive summary.

The analysis concluded that under normal operations, the mine “would not be expected to have a measurable effect on fish numbers and result in long-term changes to the health of the commercial fisheries in Bristol Bay.”

The Corps has not fully addressed numerous issues raised during the public review process that led to the report, said Nelli Williams with Trout Unlimited Alaska.

The agency erred in its finding that the project should not damage the fishery in the long run, she said.

“They have that wrong,” Williams said.

The report shows the mine would damage more than 191 miles of streams and 4,614 acres of wetlands, she said. In most cases, the damage would be permanent, she said.

“You have massive impact to all the streams and wetlands that contribute to the fishery,” she said.

In recent years, the fate of the mine has toggled between the politics of presidential administrations.

Pebble parent Northern Dynasty Mineral has pursued the development for about two decades. Early opposition from tribal and fishing groups about the mine’s threat to one of the world’s most valuable fisheries sparked an international outcry against the project.

The prospect survived a 2014 proposal from the Environmental Protection Agency under Obama to issue a preliminary veto that would kill the project. The agency under the Trump administration reversed course in 2019, yanking that proposal.

Major mining partners have also left the project amid the criticism, leaving Pebble Limited, a small company, in pursuit of investors that would help foot the multi-billion dollar costs.

The Corps has not thoroughly addressed multiple issues, including about the economic viability of the project, critics said.

The mine exists on state land, and would provide more than $1 billion in state revenues, Collier said.

Alaska Native corporations, including longtime mine opponent Bristol Bay Native Corp., have vowed to stop the project by refusing to allow access to the site across their lands.

Jason Metrokin, Bristol Bay Native Corp. president, said the 20-year plan would only mine 13% of the ore deposit. A future expansion is likely, he said.

Such a step would require a new permitting process.

“Put simply, the (environmental impact statement) does nothing to alleviate our concerns about the myriad risks Pebble would pose to Bristol Bay’s watershed, salmon, way of life, and economy,” Metrokin said.

The United Tribes of Bristol Bay, representing 15 tribes from the region, said in a statement the report ignores comments from tens of thousands of people who know the project will devastate Bristol Bay.

It doesn’t address concerns from state and federal agencies and a congressional directive about shortcomings in the data and analysis, the group said.

“Despite the announcement today, this fight is nowhere near over, more permitting is required, local landowners are blocking the transportation route, and the project remains too toxic for investors,” the group said.

The Corps’ final report took a new look at the possibility of a dangerous release from the giant dam-like structure that would hold most of the finely ground waste rock known as tailings.

The analysis downplayed the risk of such a release, citing differences in design between the main Pebble tailings facility and dams at other mining projects where spills occurred in recent years, such as Mount Polley in Canada in 2014.

Pebble’s design takes steps to reduce water from building up inside the tailings facility that could contribute to a spill, the Corps said. A key feature includes a drainage system that allows water or snowmelt to flow into a treated holding pond.

“Modeling of a catastrophic, very low-probability tailings release was requested by commenters, but deemed inappropriate” based on Pebble’s “flow-through” design of its main tailings storage facility, the Corps report said.

Williams, with Trout Unlimited Alaska, said the Corps has not conducted an appropriate analysis of the engineering of the tailings facility.

”There still remains some massive issues with their tailings dam plan and analysis which means this document vastly underestimates impacts,” she said.

Collin O’Mara, president of the National Wildlife Federation, said the review should have evaluated the consequences of a failure of the tailings facility that could devastate the watershed with toxic liquids left from the mining process.

“The administration should instead put a stop to this project and protect Alaska’s salmon and the communities that depend upon Bristol Bay,” he said. “Since they won’t, we will see them in court.”