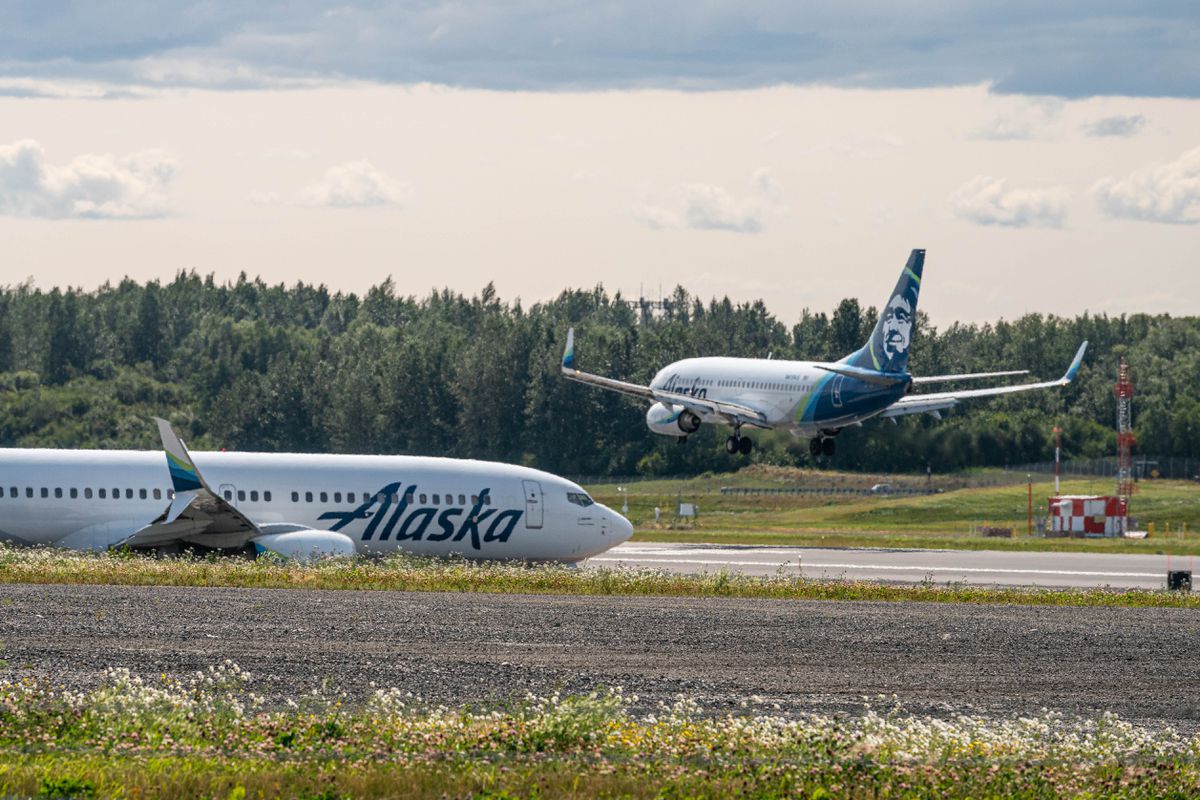 An Alaska Airlines plane lands while another waits to take off on Thursday, July 30, 2020 at the Ted Stevens Anchorage International Airport. (Loren Holmes / ADN)

An Alaska Airlines plane lands while another waits to take off on Thursday, July 30, 2020 at the Ted Stevens Anchorage International Airport. (Loren Holmes / ADN)

Alaska Airlines announced on Wednesday it will undertake widespread job cuts to survive the lull in travel during the pandemic, including in Alaska where about 330 employees are expected to lose their jobs on Oct. 1.

“We currently anticipate these separations to be permanent,” the company said in a letter on Friday to state officials, required under federal law for large layoffs.

The airline has about 2,000 Alaska-based employees, an official said in June.

The job cuts will add to staggering losses in industries across Alaska during the COVID-19 outbreak. Alaska unemployment rose to record levels above 12% in April, May and June.

Alaska Airlines announced 1,600 permanent layoffs in the state of Washington on Oct. 1, according to The Seattle Times.

More than 4,000 employees will be furloughed or laid off across the company, the airline said in a statement.

The losses in Alaska will be located in Anchorage, according to the filing with the state.

“We’re making tough decisions to right-size Alaska Airlines for future success, but it means we’re losing fantastic people,” the airline said in a written statement, provided by spokesman Tim Thompson. “Last week we issued WARN notices to 331 Anchorage employees, which is about 26% of employees in Anchorage, and includes customer service agents, flight attendants and maintenance technicians.”

The number of notices may be higher than the actual losses in October, the statement said.

“We were able to prevent involuntary pilot furloughs through a combination of voluntary leaves and early outs, which allow us to keep all of our pilots employed beyond Sept. 30, either as an active pilot or on a leave at a reduced rate of pay and with full health-care benefits,” it said.

In Anchorage, flight attendants will suffer the heaviest losses, at 135 jobs, according to the filing with the state. Ramp crews will see 95 jobs lost, customer service agents will see 76 jobs lost and aircraft technicians will see 25 jobs lost.

The employees will be “separated” from the airline, but the airline intends to bring them back when demand returns, Thompson said in an email.

“We will continue to refine our staffing modeling over the next several weeks and expect figures to be final closer to October 1,” the Alaska Airlines statement said.