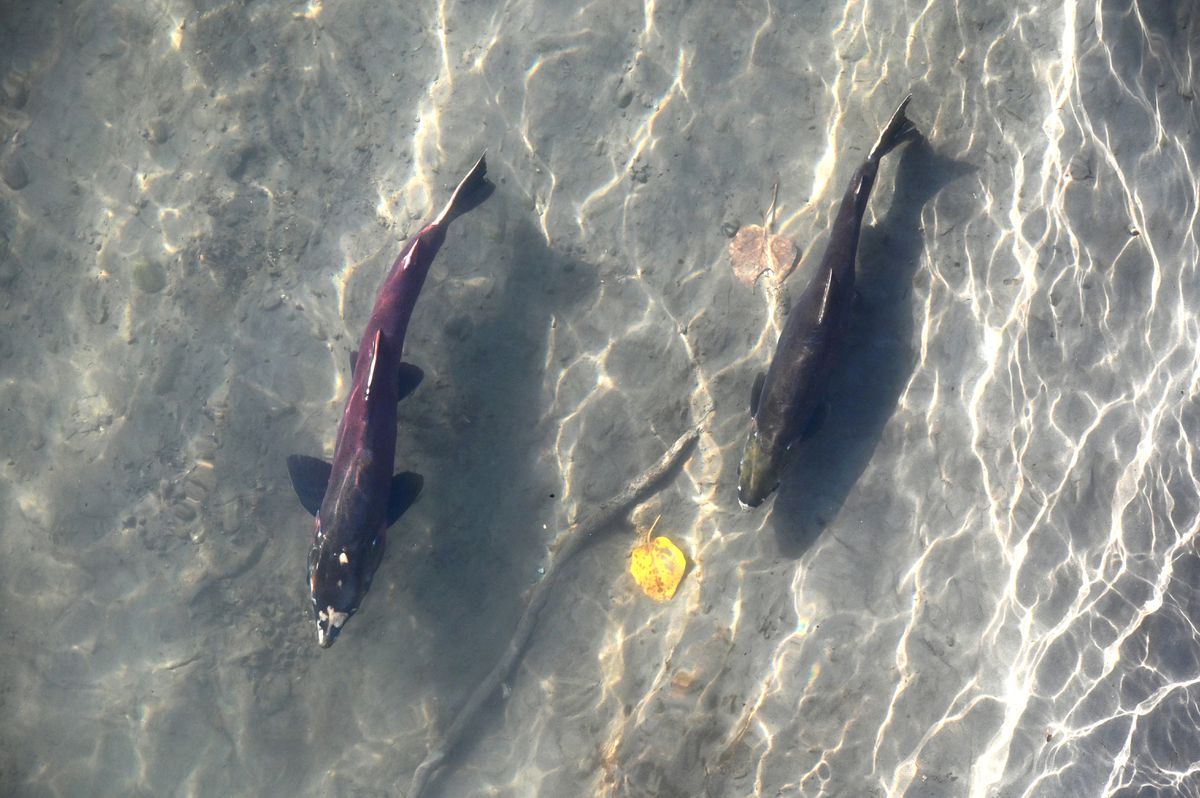 Are toxins from road runoff a threat to salmon in Anchorage’s most popular fishing streams? A Go Fund Me campaign has been launched so Alaskans can chip in to find out.

The push stems from an organic compound in tires called quinone that was newly identified by researchers at the University of Washington, said Birgit Hagedorn, a geochemist and longtime board member of the Anchorage Waterways Council.

“The little flakes that rub off of tires, especially larger truck tires, can be transported into the streams via stormwater. And they leach out the compound that they discovered was highly toxic to salmon. They were specifically looking at coho salmon,” she explained.

Hagedorn hopes to raise $5,500 to test the urban waters that run off the Seward and Glenn highways into Ship Creek and Campbell Creek. The Ship Creek salmon sport fishery is the region’s most popular and successful, with anglers targeting stocked chinook and coho salmon. Other stocked coho fisheries have been established in Campbell and Bird creeks, according to the Alaska Department of Fish and Game.

Hagedorn already has samples of snowmelt in her freezer to send to testing labs and more will be taken this summer.

“During the first really big rain event, we want to go out and sample again. We provide the sampling and the labor and we don’t take some money for that,” she said. “The fundraiser is to pay for the analysis, because it’s relatively complicated. It takes up to $500 for just one sample.”

Little is known about the compound that is used by tire manufacturers to make the rubber more durable.

“How long does it actually last in water? What is the degradation rate? Can it be absorbed? Those are really variable research studies that could be put in place to understand this compound better,” she said.

The hope is to eventually partner with the Anchorage municipality and the state university to advance further studies and encourage tire makers to stop using the toxic compound.

That’s been the case in Washington state, where a Better Brakes law passed in 2010 phases out copper from brakes completely by 2025 to protect salmon. California has followed suit and the program is advancing nationwide.

Studies have shown that copper levels as low as 2 parts per billion from vehicle brake pads and exhaust impair the sense of smell in juvenile salmon, which helps them avoid predators.

“If there are larger predators around and the fish are not able to respond to these danger signals in the water, they would be the next snack,” said Jason Sandahl at Oregon State University, one of the first to show how contaminants can disrupt the chemical balance of sea creatures.

Meanwhile, studies like Hagedorn’s highlight just how little is known about impacts of compounds in a watery mix of automotive byproducts that run off roads into adjacent waters.

“Urban runoff mortality syndrome occurs annually among adult coho salmon returning to spawn in freshwaters where concurrent stormwater exposure causes rapid mortality. It is unlikely that coho salmon are uniquely sensitive, and the toxicology of 6PPD quinone transformation products in other aquatic species should be assessed,” wrote the UW scientists in the January 2021 abstract in Science Magazine.

“To know what’s out there, I think that’s an important first step.” Hagedorn said.

Gulf crabbers go big - Crabbers throughout the Gulf of Alaska are enjoying some great hauls, especially for Tanners and Dungeness.

An 11-day winter fishery throughout Southeast Alaska produced 1.26 million pounds of Tanner crab, the fourth largest catch in the past 15 seasons for nearly 70 permit holders. At an average price of $3.72 per pound, the fishery was valued at $4.2 million at the docks, the highest since 1999.

For golden king crab, four out of seven Southeast fishing districts remain open with a combined harvest limit of 76,500 pounds. Crabbers were fetching $11.33 per pound and many were selling the crab off the docks.

Southeast crabbers also had their second-best fishery for Dungeness. Catches for the combined 2020 summer and fall crab fisheries totaled nearly 6.7 million pounds, more than double the 10-year average , and just shy of the record 7.3 million pounds taken in 2002.

The price to fishermen was disappointing, averaging $1.72 per pound, down by more than a dollar making the dockside value over $11.5 million.

Kodiak is gearing up for a Dungeness crab fishery that begins May 1 and will last into the fall. Last season produced the biggest catch in 30 years at just under 3 million pounds for a fleet of 29 boats. Prices for the two pounders dropped to $1.85, down from more than $3 in previous seasons.

The higher catches were due in part to “more horsepower on the grounds” as opposed to a higher abundance of crab, said Nat Nichols, area manager for the Alaska Department of Fish and Game at Kodiak. The stocks are very cyclical and could be the tail end of a peak.

“We’ve got 50 to 60 years of history to look at and in the past these peaks have lasted three years of so and then we kind of go down until we get another big group of crab coming through. So this could be that we’re coming to the end of this peak. This summer will tell the tale,” he said.

After sitting out a Tanner fishery this year, crabbers at Kodiak, Chignik and the Alaska Peninsula have fingers crossed for an opener in 2022. Surveys over several years showed the largest cohort of Tanner crabs ever seen is poised to grow into the fishery throughout the westward region.

“There’s been a good recruitment signal all the way out. And they seem to be growing well,” Nichols said, adding that Tanners at the South Peninsula near Sand Point and King Cove usually lag about one year behind. He agreed that fewer cod fish throughout the Gulf could account for the steady uptick in Tanners.

Seaweed stops gas – For several years, studies in Australia and Canada have proven that small amounts of red seaweed added to livestock feed greatly reduces methane from the gas they pass in burps and farts. Cow burps alone account for 26% of the nation’s total methane emissions according to the EPA, and the U.S. is only the world’s fourth-largest producer of cattle, behind China, Brazil, and India.

Now researchers at the University of California Davis have revealed that cattle eating just 3 ounces of red seaweed daily over five months gained as much weight as their herd mates while burping out 82% less methane into the atmosphere. The seaweed additive also did not hurt the cattle’s growth or change the taste of beef.

The UC Davis studies followed earlier research on dairy cows where daily seaweed dosages were used from the time they were calves until fully grown. Methane emissions dropped by 50% and the longer term use did not change the taste of the cows’ milk.

All researchers used a red seaweed found in warmer waters throughout the Pacific called Asparagopsis toxiformis. It’s one of the most popular seaweed ingredients in Hawaiian cuisine and used traditionally in poke. But the supply from wild harvests is not enough to go around.

To the rescue: startups already are underway to produce it.

SeafoodSource reports that Sweden’s KTH Royal Institute of Technology has partnered with Yale University to cultivate the seaweed in land-based tanks with intentions of providing it to livestock farmers around the world.

An Australian project called Greener Grazing is the first to develop methods to produce Asparagosis spores for ocean cultivation. And last year a dried product called FutureFeed created at James Cook University in partnership with Meat and Livestock Australia won a Food Planet Prize of $1 million. Doses of just 1-2% of their dried seaweed reduced methane emissions in cud-chewing livestock by 99 percent.

The makers claim that if just 10% of global livestock producers added 1% of Asparagopsis seaweed meal to the daily feeds of cud-chewing livestock, it would be similar to taking 100 million cars off the road.