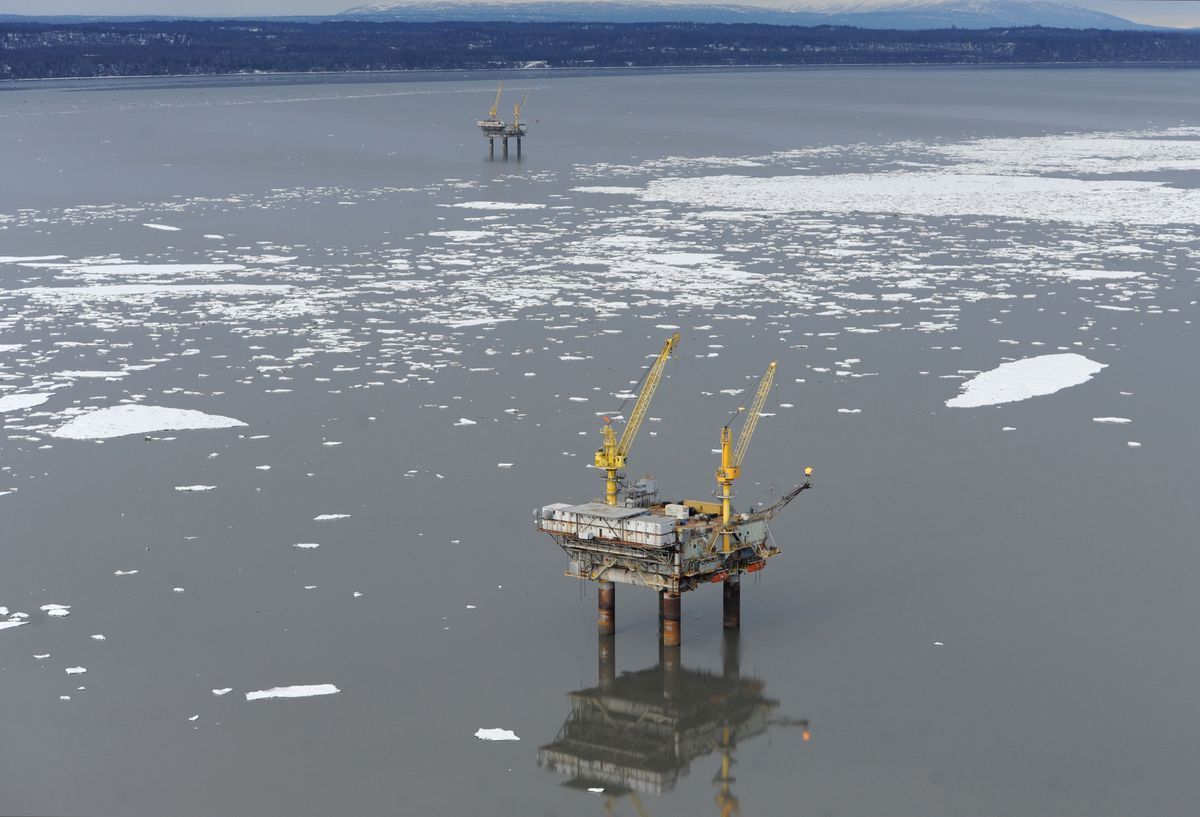 Hilcorp Alaska estimates a crude oil leak discovered in western Cook Inlet Saturday released less than 3 gallons, an amount state regulators continued to investigate Monday along with other questions, including what caused the leak following a violent impact to the Anna Platform that may have been caused by sea ice.

Observers in an initial overflight discovered large sheens on the water shortly after the leak was discovered by workers on the platform late Saturday morning. But additional flights starting early that afternoon and continuing through Monday morning found no additional sheening, according to the Alaska Department of Environmental Conservation.

The threat of an oil release no longer exists from the pipeline after Hilcorp late Sunday night finished pushing a squeegee-like projectile known as a pig through the pipeline, officials said Monday morning. That pushed out the crude oil, replacing it with the filtered seawater that had been pumped behind the pig.

A "unified command center" that had been formed in Nikiski in response to the spill — consisting of DEC, the U.S. Coast Guard and Hilcorp — was shut down Monday morning.

The state is also reviewing potential penalties to determine if they are warranted, said Candice Bressler, a DEC spokeswoman.

The leak is suspected to have come from the 8-inch, 1.6-mile oil pipeline running between the Anna and Bruce platforms, southwest of Tyonek. Hilcorp shut down oil and gas production at Anna after the leak was discovered, dramatically reducing the pressure in the pipeline to cut the leak rate.

Hilcorp is also responding to a months-long natural gas leak on the eastern side of the Inlet at Platform A, also from an undersea, 8-inch pipeline, and northwest of Nikiski.

The leaks have yet to be inspected by divers so they can be repaired.

The oil pipeline was at full capacity, which is about 19,500 gallons of oil, when the leak was discovered. The removed crude oil has been placed in a holding tank on the Bruce Platform, Ryan said.

A small amount of petroleum can cause a large sheen, said Ryan.

The state believes the leak is 10 gallons or less, she said Monday.

Bob Shavelson, with the watchdog group Cook Inletkeeper, said he doesn't believe Hilcorp's estimated spill size. The company has repeatedly been hit with violations and warnings by state oil-well regulators who say it has a "history of noncompliance" in Alaska.

"Nothing in Hilcorp's track record leads us to believe a word they say," Shavelson said. "When you have a loud impact and then a spill, and presumably some type of eruption in the pipeline, you have to assume it's larger than three gallons."

"We are trying to gather all the information we can," he said.

The cause of each leak is not expected to be known until sea ice clears enough to allow repair divers to inspect the lines. The divers' tethers to surface support crews could be damaged by chunks of ice moving on the Inlet's strong tides, Ryan said.

Hilcorp has said those dives could take place later this week.

Ice slamming into platforms and loosening bolts at joints along pipelines has been a problem for Cook Inlet platforms before. That is one suspect in the oil leak, said Ryan.

Cook Inlet pipelines have also been damaged in the past when long sections of pipe are no longer supported by the seafloor, making them subject to strong vibrations and possible rock strikes in the Inlet's strong tidal currents.

That scenario is suspected in the gas leak, located not far from the Inlet's forelands. At the forelands, the nearly 200-mile-long Inlet narrows, enhancing currents that scour seabeds and move rocks and pipelines.

Such a scenario is less likely at the Anna Platform, which is much farther north of the forelands and doesn't face such significant scouring issues, Ryan said.

The age of the facilities also raises questions. Both were installed in the mid-1960s. Ryan said the pipeline between the Anna and Bruce platforms is not entirely original and has seen some updates over the years.

She said officials with the department are wondering whether Alaska regulations need updating to prevent future problems at the region's many old facilities.

There "has been a lot of concern about aging infrastructure in Cook Inlet," and the incidents have raised questions about whether different standards are needed, said Ryan.

But she added that at the moment, the department is in "response mode" and focused on the problems that led to the leaks.

Todd Paxton, general manager at Cook Inlet Spill Prevention and Response Inc., the spill response contractor for Hilcorp, said he believes the amount of the leak could be less than three gallons.

He was part of the flight at 1:30 p.m. Saturday looking for sheen and wildlife. He found neither in an area extending 15 miles north and south of the Anna Platform. The CISPRI spill-response vessel Perseverance was also on scene through Monday morning and found no sheen or harmed wildlife.

Paxton's determination of the leak size was based on photos and comments from those who saw the sheen. They involved estimates of square footage and descriptions of sheen colors that indicate the thickness of product spilled.

He said the conditions were excellent for observation, with mostly open water rather than sea ice, plus calm winds and water.

The leaked oil "disappeared," perhaps in part by natural evaporation. In the silty Inlet, petroleum can also mix with mud and sink.

"It's unrecoverable due to the low volume and the fact it couldn't be found," he said. "You can't recover if it you can't find it."