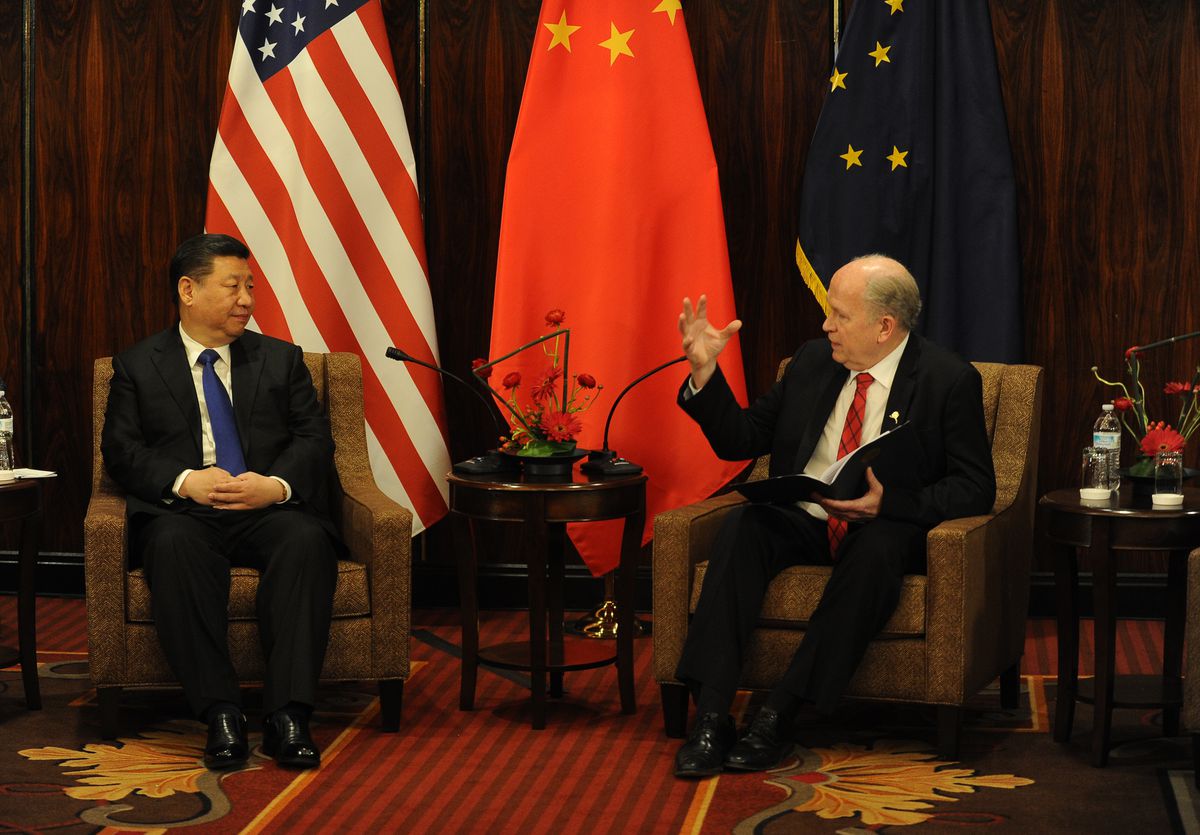 While some analysts are skeptical that the new trade agreement between the United States and China will help Alaska's gas export project, a state official who recently attended a conference in Beijing said potential Chinese investors and gas buyers were encouraged by the deal.

But Meyer, who was in China last week to market the state's LNG project, said Wednesday that the trade deal helped change that perception. The U.S. Department of Commerce announced the agreement May 11.

Meyer said his meetings with Chinese executives included a discussion with a high-ranking Chinese official for a state-owned company, who said the deal shows the "U.S. has given the green light to China for energy trade and specifically LNG and natural gas trade," Meyer quoted the official as saying.

Meyer would not name the executive or company.

The state corporation is seeking gas buyers in Asia who might sign long-term contracts, as well as investors to help with project financing. Alaska is the lone sponsor of the $40 billion to $45 billion project after ExxonMobil, BP and ConocoPhillips backed out late last year. The project involves construction of several major facilities, including an 800-mile pipeline from the North Slope and a gas export terminal at Nikiski.

Gov. Bill Walker said the timing of the trade deal was important. It came a month after the governor, Meyer and others met with Chinese President Xi Jinping on April 7. Xi had stopped in Alaska on his flight home after meeting President Donald Trump in Florida.

China, a huge buyer of Alaska fish, is the state's largest trading partner. But part of the discussion in Alaska centered on the state's LNG project. On a couple of occasions, Xi said it was important that any LNG trade barriers that might exist with the United States be removed, said Walker.

"(The trade deal) removed any optics of there being a perceived restriction,"  Walker said in an interview Wednesday.

A 2015 Reuters article indicated that the U.S. Department of Energy under President Barack Obama was advising U.S. companies not to accept Chinese investments in their LNG projects.

The agency, amid concerns that exports would lead to higher domestic gas prices, felt it faced political risk approving projects that shipped gas to China or were partly owned by the Chinese, according to the article. Its source was Michael Smith, chief executive of Freeport LNG, a Texas project.

Concern about about the federal government's stance at the time and the lack of long-term gas contracts between Chinese buyers and U.S. sellers created the perception that the Chinese were wary of U.S. projects, said Nikos Tsafos, an oil and gas consultant for the Alaska Legislature.

In that sense, the trade agreement is a clear signal that the United States wants the Chinese as partners in LNG projects, said Tsafos, whose legislative contract ends this month.

The agreement on LNG, spelled out in a paragraph, doesn't legally change anything, Tsafos said. But that expression of U.S. support might make some Chinese investors feel more comfortable.

Meanwhile, Alaska LNG will continue to be judged on its economic merits, analysts said. One obstacle is whether state officials can figure out how to produce and ship natural gas to Asia at a cost lower than that of other export projects in the U.S. and worldwide.

"I'm looking for a set of data points to convince me this current iteration (of Alaska LNG) has legs, and this isn't one of those data points," Tsafos said of the deal.

A study released last year by consulting firm Wood Mackenzie called Alaska LNG one of the least competitive projects in the world, sparking ongoing efforts by the state to lower costs.

Kristy Kramer, head of Americas gas research for Wood Mackenzie, said the trade deal could remove any political concerns that might have kept Chinese companies on the fence from signing long-term gas agreements with U.S. companies.

Meyer pointed out that Alaska's LNG terminal would be significantly closer to China than other U.S. projects, giving it an important advantage.

He said the visit by Xi to Alaska was critical for creating access in China with top executives. On May 18, he spoke at an international LNG summit in Beijing, in front of about 200 people.

During his visit to China, key Chinese government officials helped arrange meetings at energy companies and banks, Meyer said. Two other AGDC officials on the trip were Lieza Wilcox, vice president of commercial and economics, and John Tichotsky, economic adviser.

The talks with Chinese business leaders came with relatively little notice, Meyer said. Such meetings can sometimes take months or years to arrange.

"We accomplished that on our first visit," he said.

An Alaska deal with the Chinese, if one can be had, will take longer.

"It's a large project, as we all know, so it does take time," Meyer said. "We're not going to get a deal done on the first visit."