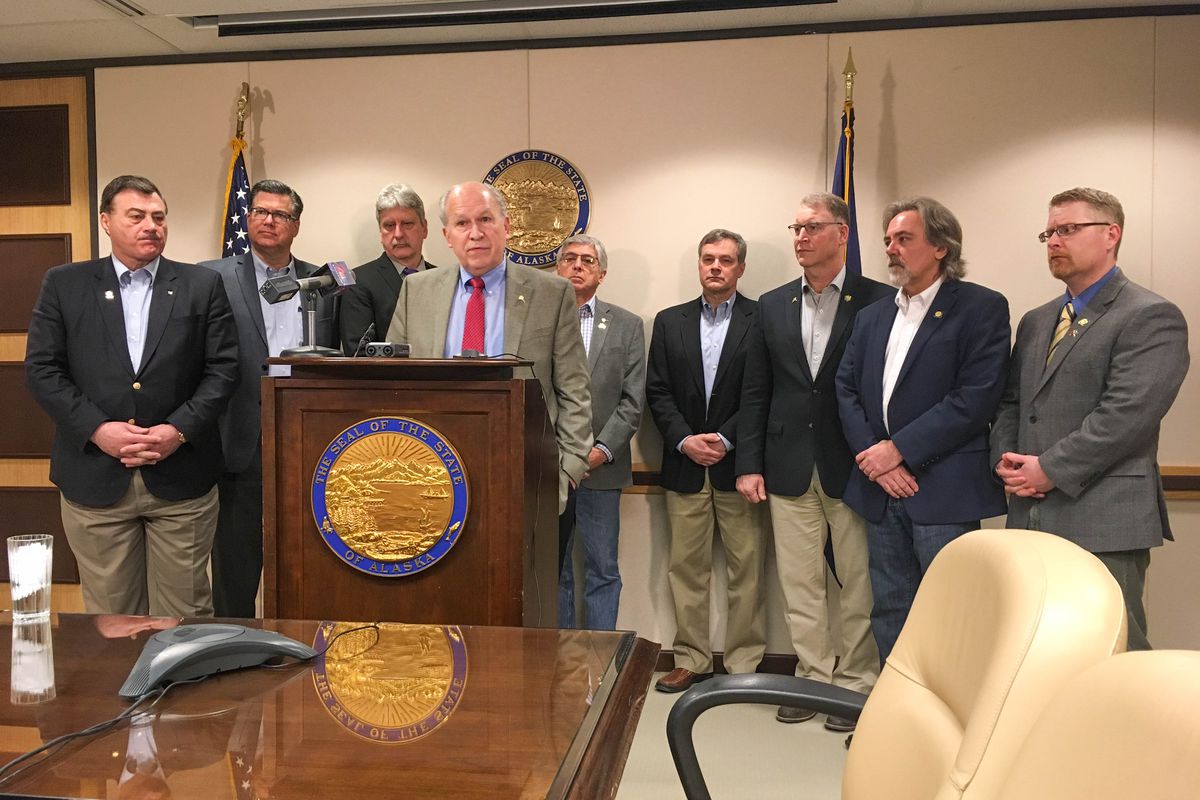 Gov. Bill Walker holds a press conference on Saturday, April 8, 2017 to discuss his meeting with President Xi Jinping of China, where the two talked trade and the governor’s hopes for a liquefied natural gas project. Xi and his delegation made a surprise visit to Anchorage the previous evening on the way back to Beijing from a summit with President Donald Trump at his Mar-a-Lago resort in Florida. (Jeannette Lee Falsey / Alaska Dispatch News)

Gov. Bill Walker holds a press conference on Saturday, April 8, 2017 to discuss his meeting with President Xi Jinping of China, where the two talked trade and the governor’s hopes for a liquefied natural gas project. Xi and his delegation made a surprise visit to Anchorage the previous evening on the way back to Beijing from a summit with President Donald Trump at his Mar-a-Lago resort in Florida. (Jeannette Lee Falsey / Alaska Dispatch News)

As Chinese President Xi Jinping and his large entourage gazed at the wintry mountains along Turnagain Arm during a surprise visit to Anchorage this week, he mentioned to Alaska Gov. Bill Walker, who stood at his side, that China was hosting the Winter Olympics in 2022 and its athletes were looking for snowier venues to train.

Walker gestured down the Seward Highway to the community of Girdwood, home to a popular ski resort, and the two briefly discussed downhill skiing.

The relationship between China and Alaska is one of customer and merchant, and the Chinese delegation was here to browse. Heading home from a summit with President Donald Trump at his Mar-a-Lago resort in Florida, they listened to pitches from the Alaskans, who were eager to showcase the wares of their state to its largest trading partner. Alaska exported seafood, minerals, oil and other products valued at just under $1.2 billion to China in 2016.

Alaska's major industries were the fodder for discussion during the visit, which began when Xi, his wife Peng Liyuan and dozens of officials, security and state media landed at Ted Stevens Anchorage International Airport in a refurbished Air China 747-400.

A motorcade of 24 cars whisked the visitors down the Seward Highway to Beluga Point, where they admired the sweeping views of Turnagain Arm in clear, cool spring weather.

The final stop was the Hotel Captain Cook for posed photos, a meeting and an Alaska seafood dinner at the Crow's Nest on the hotel's top floor. Admiring the view of the Chugach Mountains, Xi asked Walker whether the restaurant, at the top of the hotel, was of the revolving variety. (It's not.)

In a press conference on Saturday, Walker shared with reporters these and other tidbits from his talks with Xi. Without going into much detail, the governor said the two discussed seafood, air cargo, oil and gas, minerals, tourism and the liquefied natural gas export project he so strongly supports.

"He felt that as a result of his coming to Alaska, we will see an uptick of tourism from China," Walker said.

Xi passed Walker some through-the-grapevine information about President Trump. According to Xi, Trump "made some very complimentary comments about Alaska and specifically the Alaska LNG project," when meeting with Xi and his wife in Florida, Walker said. The governor did not elaborate further on what specifically Trump said and was not available for comment after the press conference ended.

Climate change, an issue of lesser priority for the administration, was left to Lt. Gov. Byron Mallott to discuss over dinner with other officials. Walker said China would like to fill the policy space vacated by the Trump administration, which has moved to reverse many Obama-era policies designed to mitigate climate change.

"It appears with the shift from the U.S. of leading a bit less, they (the Chinese) may be taking over the position of leading on that," Walker said.

The talks did not include a discussion of North Korea, which recently launched a medium-range missile into the Sea of Japan, with Walker saying the conversation was limited to "topics I have an impact on."

The press conference was cut short by communications director Grace Jang after Jeff Chen, a Taiwanese-American man who protested outside the Hotel Captain Cook during the meeting on Friday, asked the governor how he could do business with an authoritarian government.

The interest in Alaska resources from the highest echelons of China's Communist Party was a welcome bit of good news for a state whose economy and budget have been pummeled by recession. But it's unclear what comes next — whether the opportunity to bend the ear of China's paramount leader will translate to more investment, more tourists and more exports — or not.

"Assuming that just because we have a particular resource, deals are just going to happen organically is a mistake," said Bill Popp, president and CEO of the Anchorage Economic Development Corp. "It's a question of whether we really want this and what we are willing to invest in developing trade relationships, or is it another flash-in-the-pan moment where everyone felt good for a moment but nothing ever came of it?"

China is clearly interested in securing economic and political footholds in the Arctic as the region's thinning sea ice unveils new shipping routes, fishing grounds, oil and gas, and minerals. Several of its government ministries fund research in the Arctic. It has launched several polar-orbiting satellites and established a research field station in Norway, and plans to add a second icebreaker to its fleet of one, the MV Xue Long, or Snow Dragon.

Just before the summit with Trump, Xi made a state visit to another Arctic nation, Finland, where he pledged to enhance the two countries' cooperation in Arctic affairs and promised to loan the country two pandas.

There was no mention of sending pandas to Alaska. But assuming Xi's comments about Olympic training were not idle talk, Chinese skiers and skaters could be here by next season.